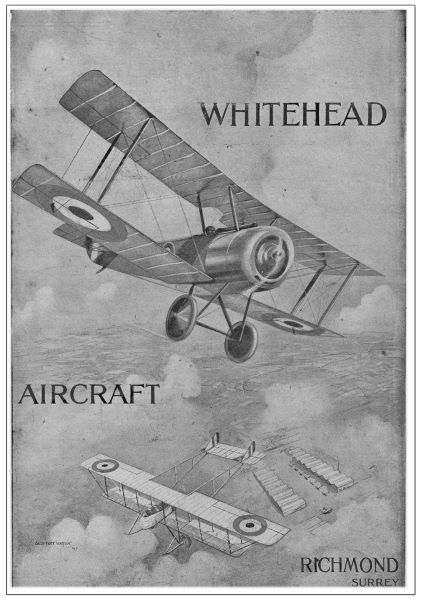 In his youth, John Alexander Whitehead had worked for the Aircraft Manufacturing Co (Airco) at Hendon.

Later, he emigrated but when WW1 commenced he returned to the UK

Using funds from his mother, Whitehead bought the old Richmond Drill Hall for his first premises. After building an initial batch of small B.E.2bs, he quickly secured a large contract to build Maurice Farman trainers.

He acquired Hanworth Park which became the site of Hanworth Aerodrome

1916 The Whitehead Aircraft Company was put into voluntary liquidation; the New Whitehead Aviation Construction Company acquired its business and assets[1]

1917 In financial difficulties, on the strength of the Sopwith contracts, acquired capital in the City to promote Whitehead Aircraft Ltd in 1917, with himself as managing director.

Whitehead Aircraft did good business during WWI, but when the war ended in 1918 the company stalled.

The company tried to diversity into car manufacturing but its vehicles (the Whitehead Majestic and Thanet) never reached full production, and the firm folded in 1920.

1929 Company removed from the register of joint stock companies[3]

is there a connection with Whitehead Light Cars?