River dock in foreground. In the distance, on the opposite bank, wreathed in scaffolding, is the former shed which housed the Beyer-Garratt locomotive of Vivian and Sons 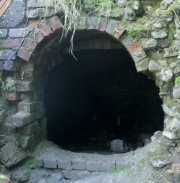 1736/7 The White Rock Copper Works were established in the Lower Swansea Valley by Robert Hoblyn. The works were operated by Thomas Coster and Co. Hoblyn later married Jane Coster, the daughter of Thomas. White Rock was one of the most important copper smelting works in the Lower Swansea Valley, which was the world centre of non-ferrous smelting for much of the 18th and 19th Centuries. It was the third of Swansea’s copper works to have been built.

c.1739 The company was renamed Joseph Percivall and Copper Co

1809 Took lease for coal from land of Earl of Jersey

From c.1870 the works produced lead and silver and were operated by Williams, Foster and Co and Vivian and Sons

1874 Vivian and Sons operated the works

Although much of the site was cleared in the 1960s, a variety of important features survive above ground; the archaeological potential below ground is very high. Some of the river wall to the west may date from the 1730s. The rear revetment wall of the ‘Great Workhouse’ survives and contains many apertures related to former kilns. A furnace survives near the north end of the site underneath the later slag incline to the eastern tips. The whole site is traversed by Smith’s Canal of 1783, one of the earliest in Wales, which passes under the works in a cut and cover tunnel with underground wharves behind the ‘Great Workhouse’. The flue on the hill to the east survives as a well marked stone-built trench.

The scheduled area incorporates the whole of the copper works site from the lower canal tunnel entrance in the south up to (but not including) the reprofiled slag heap in the north, and from the river quays on the west to a line 6m west of fencing of the road and cycle track on the east. The flue, which is on uncultivated open ground, forms a detached area east of the main road. The site is known as the White Rock Industrial Archaeology Park.

Visitors who are inspired to learn more about the site's mysteries can do no better than refer to 'Copperopolis' by Stephen Hughes[3]. This describes the development of the works and includes maps and photographs. Of particular value is a plan showing the disposition of the various buildings and waterways, with surviving structures highlighted. Unfortunately the book is now out of print.

Location: Alongside the A4217, close to where it crosses the River Tawe. Access to the site's car park is from the roundabout adjacent to the eastern bank of the river. The Landore Park & Ride is across the river. This roundabout is built on the site of the Middle Bank Copperworks established by Chauncey Townsend.