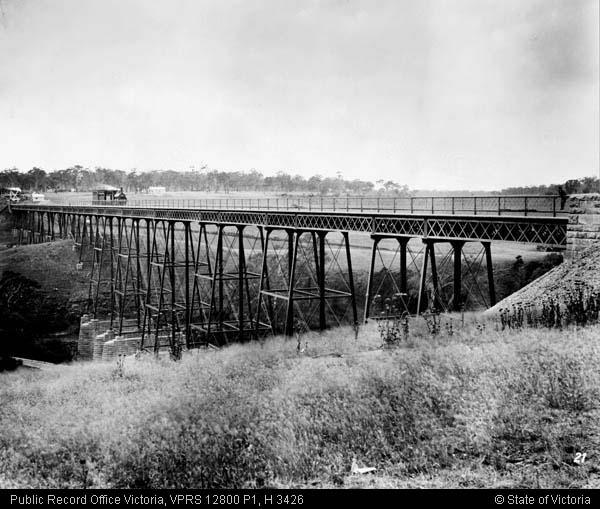 Viaduct over the Werribee River at Melton, 32 miles west of Melbourne, Australia. This wrought iron bridge is still a vital part of the railway network, and until the mid 1990's formed part of the mainline between Melbourne and Adelaide.

The Werribee viaduct, which is now completed, and has been practically tested to the satisfaction of the Victorian Railway Commissioners and other railway experts, is on the first section from Footscray to Bacchus Marsh. Without doubt it is one of the finest and largest bridges in Australia.

Its stability and weight-carrying properties were fully established in the final, one of the seven tests, when four engines were coupled together, which having gone over at a slow pace and returned at the speed of 40 miles per hour, the deflection being at the greatest point only 3-16 ths of an inch. The four engines — two tender and two tank — totalled 186 tons.

The viaduct crosses the valley of the Werribee at 32½ miles from Melbourne. Its length is 1230 feet from end to end of the girders; width of deck 24 feet, being constructed for a double line of way, and the greatest height is 130 feet from the bed of the river. About the centre of the site of the bridge, a small conical island rises from the valley to a height of 100 feet above the level of the river bed, and advantage has been taken of this feature in choosing the site, as the viaduct crosses over the highest point of this island at an elevation of about 30 feet, and being well braced, transversely at this point, lateral oscillation about the centre of the bridge is reduced to a minimum.

The viaduct consists of twenty-eight spans, thirteen of 60 feet and fifteen of 30 feet. Great difficulty was experienced by the contractor in getting a suitable foundation for the main piers, as although the valley of the Werribee shows abundance of rock on the surface, it is but a mere crust of lava, which ages ago flowed along the valley, and spread itself over the Werribee plains. When this crust was broken through alluvial drift and fine yellow sand were encountered, and the shafts had to be securely timbered and closely slabbed, and caulked, in some cases for over 40' feet in depth, until a solid bed of lignite, which underlies the drift, was reached. This bed of lignite forms the foundation for the main river piers. The shafts are filled up with cement concrete to about the surface of the ground, and from this cement concrete base, solid bluestone masonry piers are built to the height of the highest known flood land; which is 35 feet above the bed of the river. From the bluestone masonry piers spring the wrought iron columns which support the main girders. There are three of these columns on each pier, the two outside ones having a batter of one in eight. The columns consist of rolled channel iron riveted together in the form of a square. The six columns of the two ends of each 30 feet span are firmly braced together with horizon tal box girders, at intervals of 25 feet from bottom to top, and with horizontal and diagonal bracing rods, fitted with adjusting screws, so that the six columns form a pile, firmly braced together in every direction, and presenting an extremely light and graceful appearance. The 60 feet spans have no bracing between the piers. The main girders, which are placed four abreast on the tops of the columns, are what are known as lattice girders, and are of a light construction of a uniform depth of 6 feet, and each pair carries a separate line of railway, viz., for all the up and down traffic respectively. Six rolled girders; fixed across each pair of main girders, carry the decking, which is of redgum, and is built of two halves, so that one line of way is independent of the other, and only carries its own load. A neat handrail of lattice work completes the superstructure, and what strikes the observer at first is the light and aerial appearance of the whole bridge perched on top of its tall columns. There is certainly no waste of material in this bridge, as the whole of the iron work weighs less than 1400 tons. The viaduct is straight, and also level from end to end.

The iron work was manufactured in England by Messrs. Handyside and Co., to the order of Mr. John Robb, and erected by Mr. Mastell without a single accident, every piece being numbered and fitting into its place like clockwork. Mr. J. H. Thomson supervised the iron work, and Mr. W. C. Bellings the masonry and foundations on behalf of the Railway department. Mr. J. Buchanan was engineer; and Mr. T. Stranger, the manager for Mr. John Robb, the contractor. The large expense entailed in connection with the main foundations caused a considerable excess on the contract price. The structure will, in all probability, cost about £140,000.