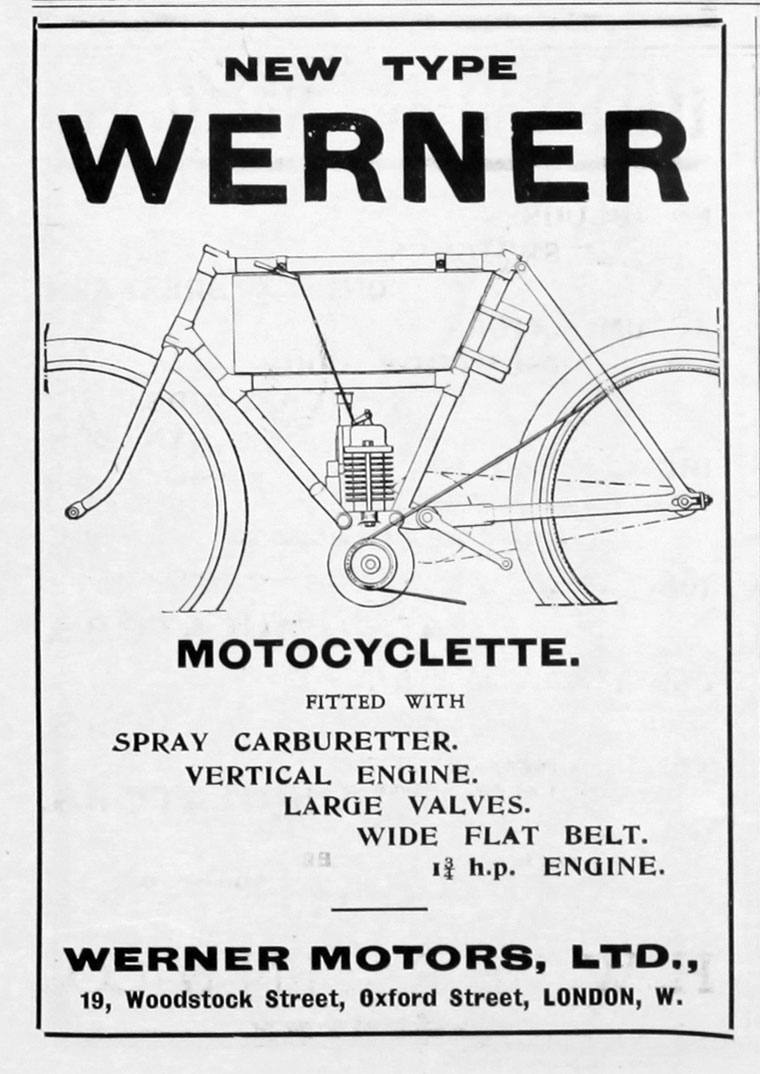 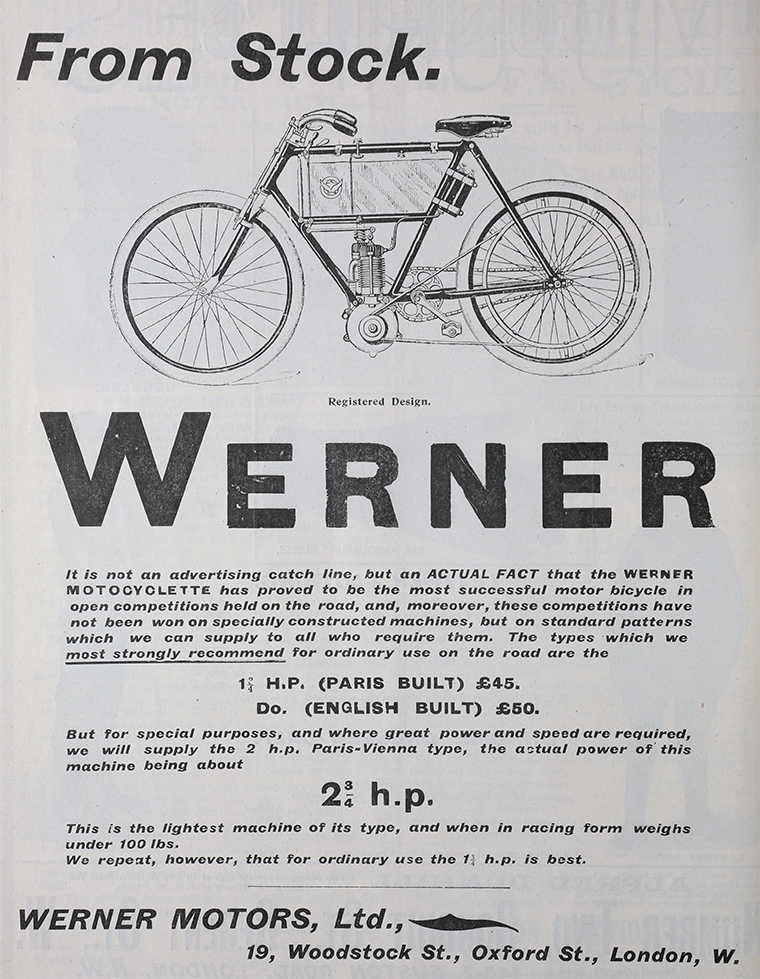 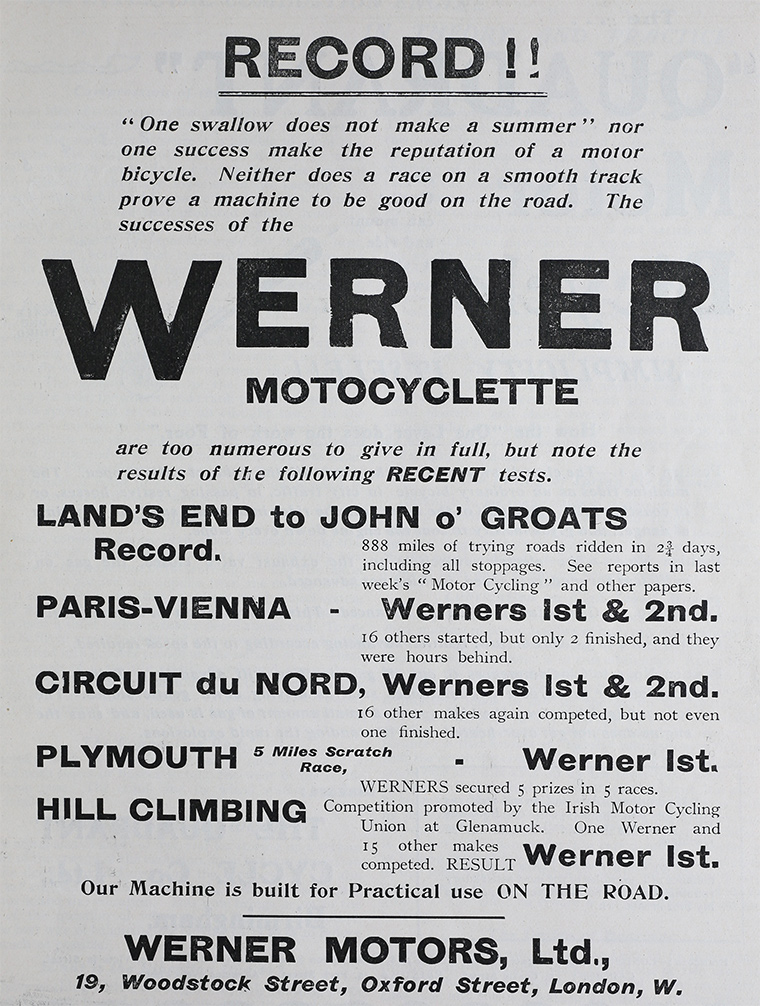 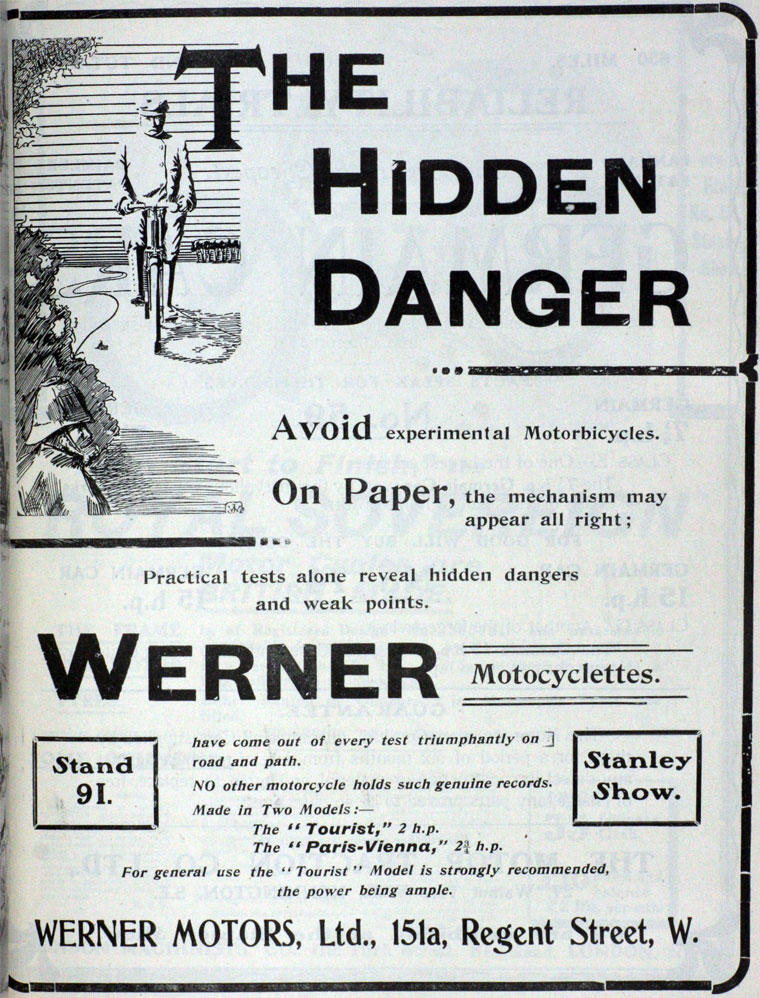 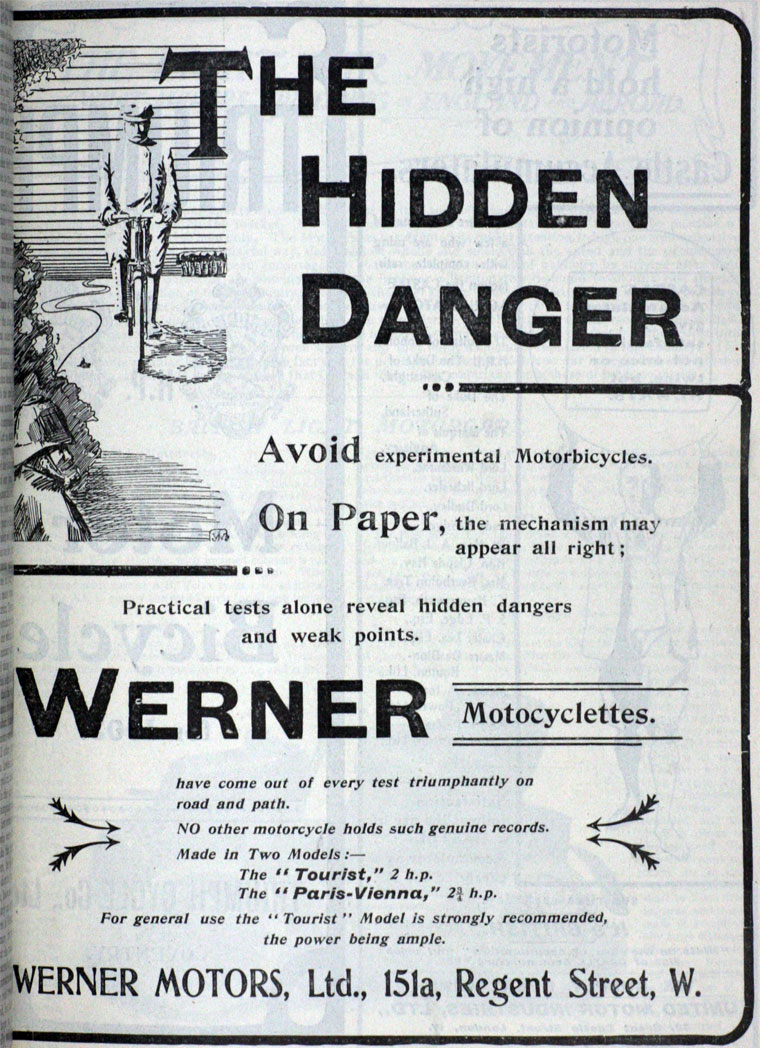 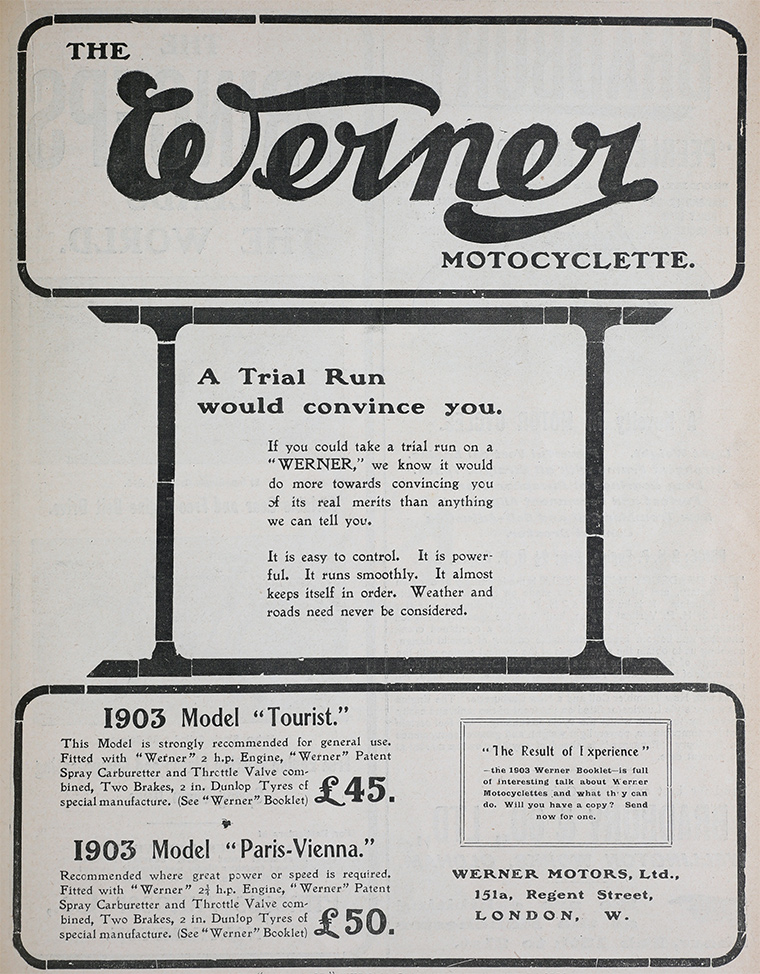 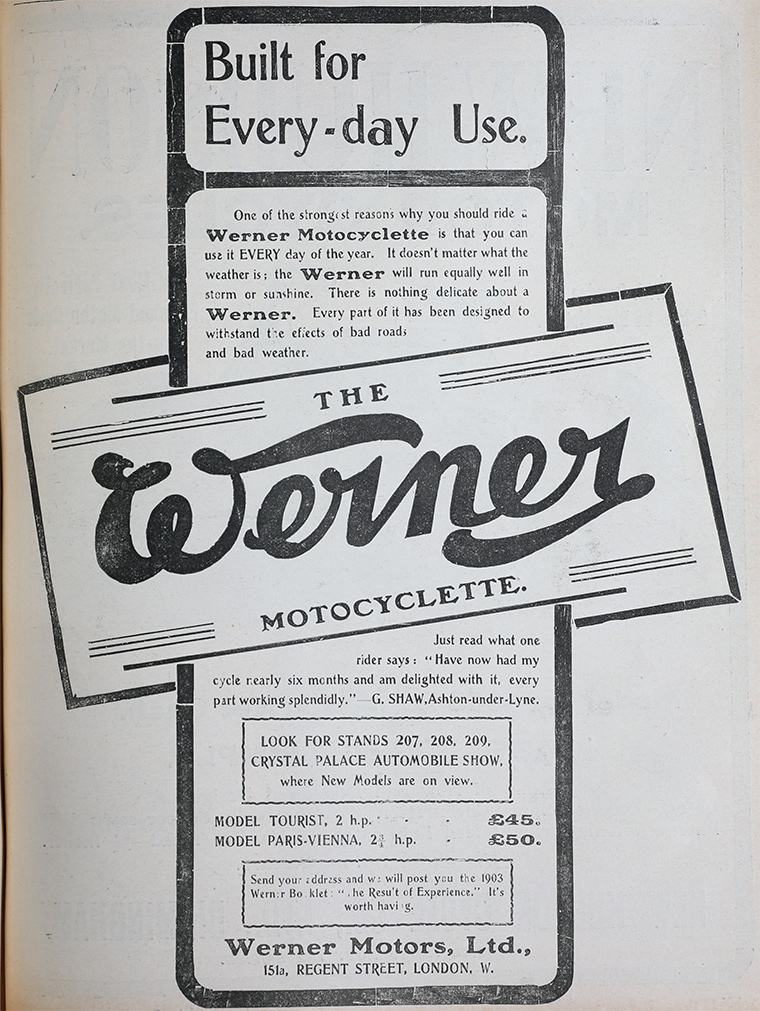 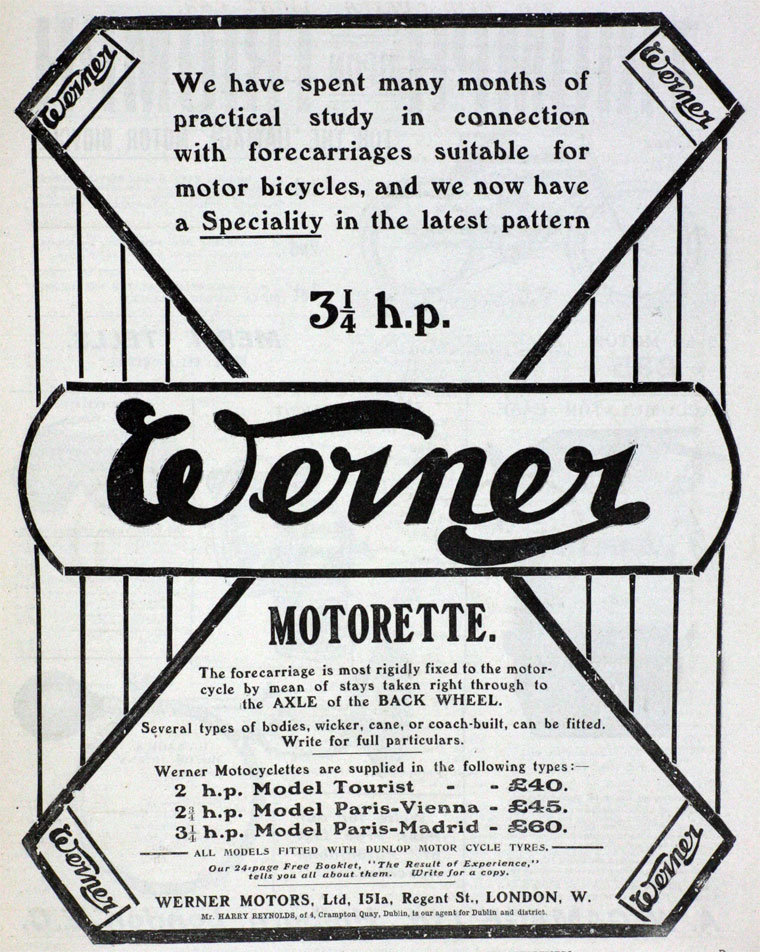 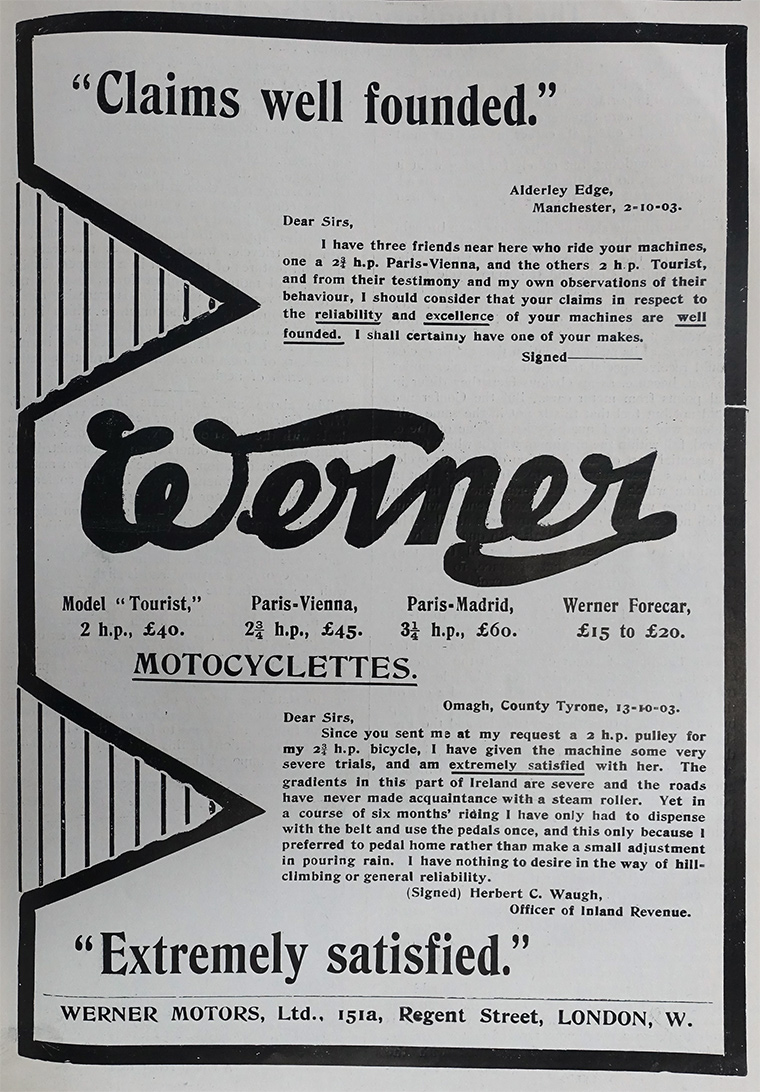 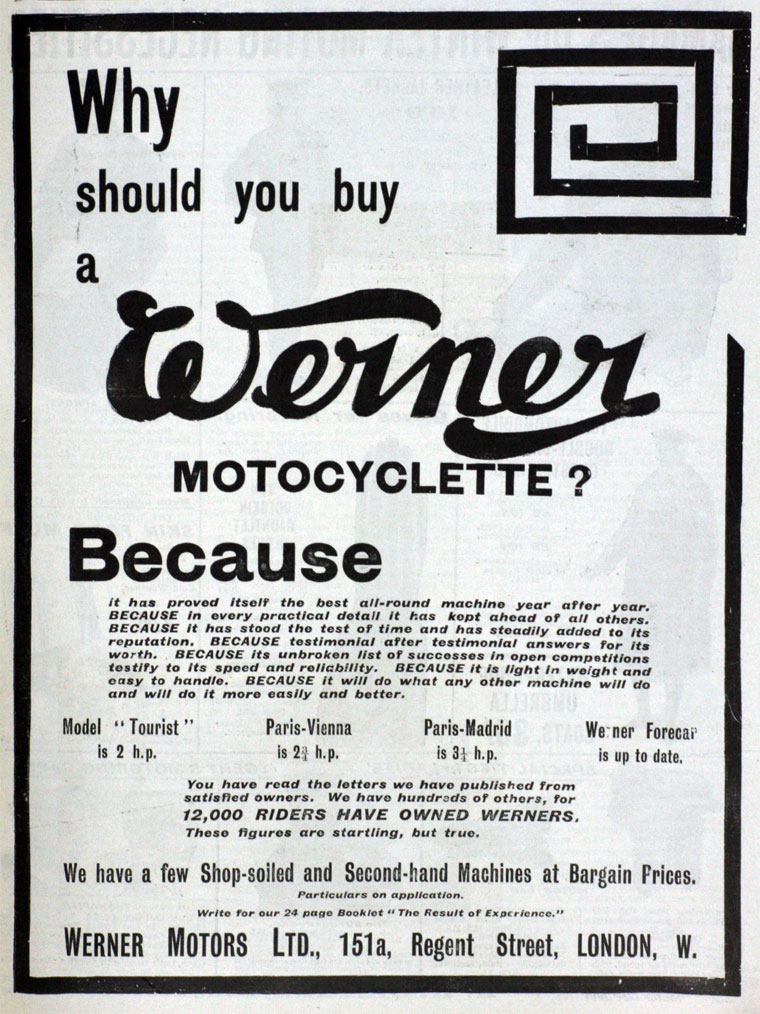 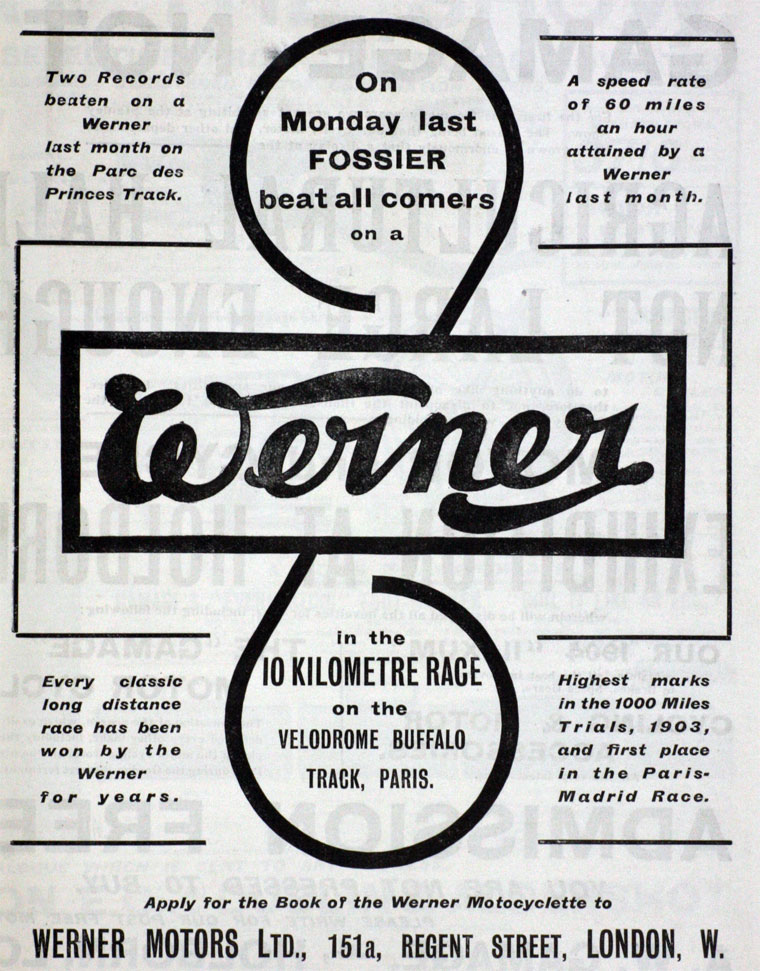 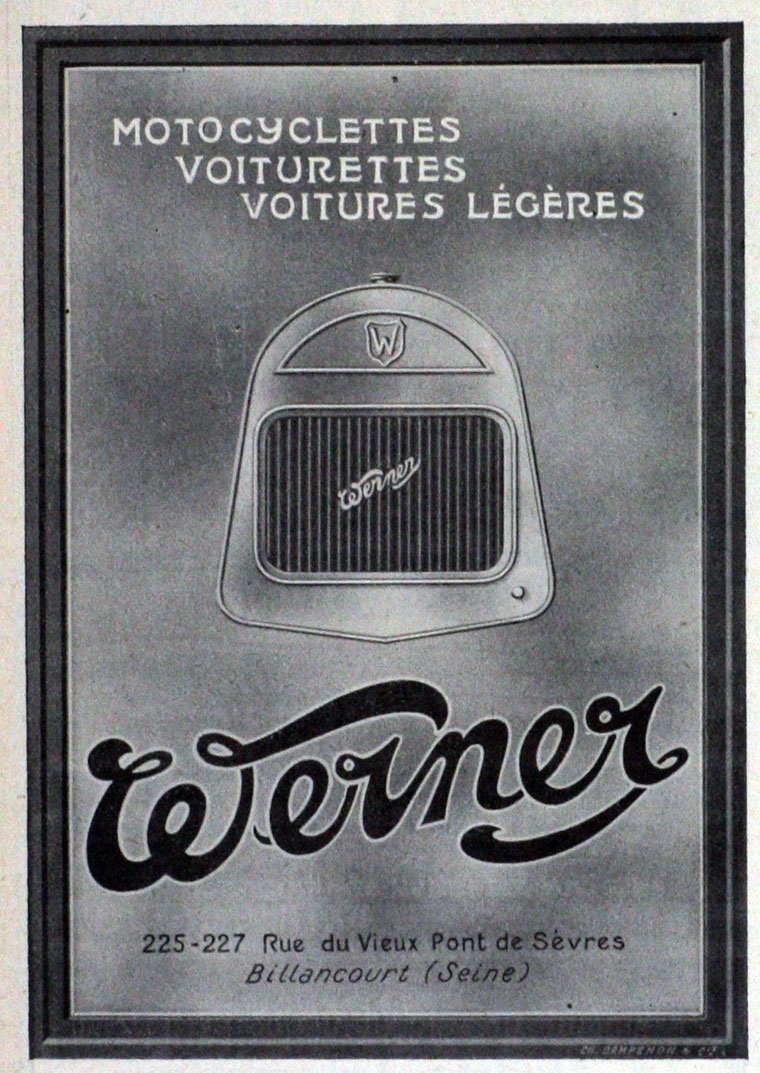 Werner produced motorcycles from 1897 to 1908. They built, and had patented, the cradled frame engine location that most motorcycles now use, in 1901.

The Werner Frères, Michel and Eugène, were of French nationality but of Russian extraction; they started experimenting with motor bicycles in 1896 using a horizontal type De Dion-Bouton engine. This machine was a failure but, by 1897, they had developed a machine with the engine mount at the steering head of a bicycle driving the front wheel via a belt rim, with hot tube ignition, which sometimes caused the machine to burst into flames, especially on windy days. This was overcome by using the new high tension coil, battery and platinum point ignition. Thus they had a saleable product and set up a workshop in Paris to manufacture these machines throughout Europe. Here at last was something the working man could afford at a price of 45 Guineas and, even in those days, hire purchase was possible.

The Werner of 1899 was a purpose-built motor bicycle of 216cc, and had a strengthened frame with special strengthened forks to accept the Werner Frères own engines. It employed a surface carburettor, which consisted of a separate sealed tank within the fuel tank into which fuel was allowed in by a screw down valve on the top of the carburettor. Its level was indicated by a float and wire, which gave one the level of fuel within the surface carburettor. Usually one kept the level at half full, one was also mindful keeping the float controls closed when not in use. Fuel was of 0.680 specific gravity and a pipe led from the surface carburettor to the induction pipe and thence to the automatic inlet valve of the engine. The automatic inlet valve had a weak spring that could be compressed between light pressure of the thumb and forefinger and had an opening of 5/32 of an inch for best results. Air was supplied by means of a twist grip air valve on the left side of the handlebar, indeed the whole handlebar was fixed to the engine via the sealed steering head and air passed through the left handlebar twist grip. Ignition was via battery and coil to an open contact breaker whose current passed through a removable handlebar plug and a right side twist grip. There was an exhaust valve lifter, two brake levers and an advance and retard lever; there was no throttle and speed was regulated by the right twist grip cutting the current and the air control twist grip. Atmospheric conditions also upset the mixture as did road surfaces. The light weight, smooth operation of its belt drive, and relative economy of the Werner did much to establish the motorcycle as a practical method of travel, although its high centre of gravity made it prone to side slip, especially in wet weather.

During the Edwardian years they were the first, or one of the first, to build a vertical-twin engine, so their influence was widespread.

1898 In the UK the some of the Werner motorcycles were built by the Motor Manufacturing Co (MMC) and sold by Werner Motors of 151a Regent Street, London