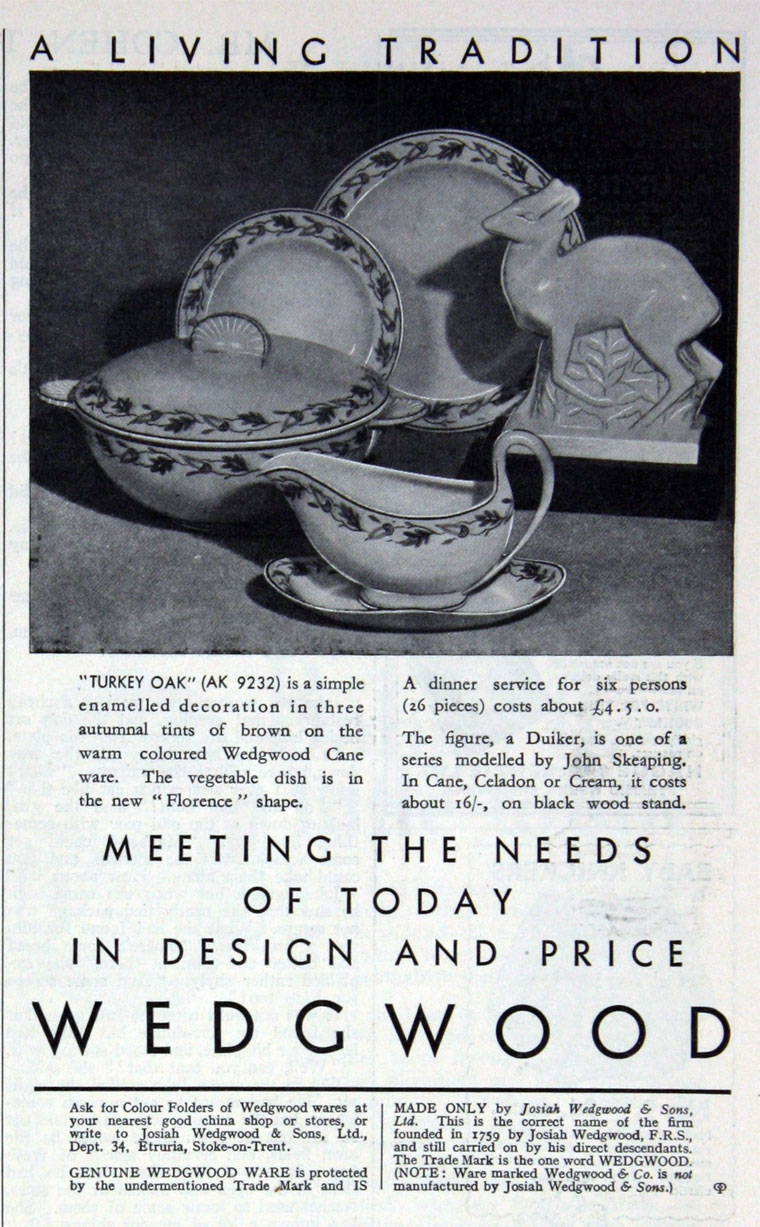 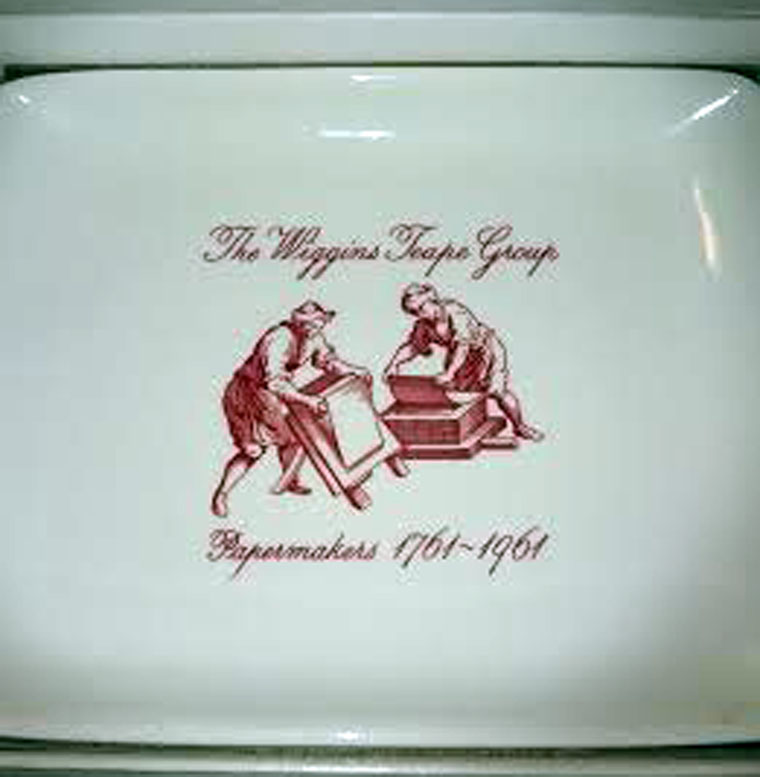 1961. A commemorative dish presented to the Wiggins, Teape and Co.

Josiah Wedgwood gave his name to the British pottery firm Josiah Wedgwood and Sons that he founded. He was also the patriarch of the Darwin — Wedgwood family. Many of his descendants were closely involved in the management of the company down to the time of the merger with the Waterford Company.

1730 Josiah Wedgwood was born into a family of potters.

1739 Josiah started work as a thrower in the pottery of his brother Thomas, to whom he was later apprenticed.

1759 Josiah leased Ivy House in Burslem, Staffs., where he started his own pottery business

1764 Married a distant cousin, Sarah Wedgwood, who backed him financially with the large dowry she brought to the marriage.

Josiah's work was of such quality that he received orders from nobility, including Queen Charlotte, who later allowed Wedgwood to name his cream earthenware, "Queen's Ware".

"Jasperware" was introduced, and is still produced today (2008), normally in blue and white.

When Josiah Wedgwood I died he left a thriving business and a fortune of half a million pounds.

Enoch Wedgwood, a distant relative of Josiah's, was also a potter; he founded Wedgwood and Co.

1795 Josiah Wedgwood (1769-1843), second son of Josiah, succeeded his father as proprietor in 1795 and introduced production of bone china by the Wedgwood company.

1827 Francis Wedgwood (1800-1888), son of Josiah Wedgwood (1769-1843), was a partner in the firm from 1827 and sole proprietor following his father's death until joined by his own sons. Soon after taking over, financial difficulties caused him to offer for sale the firm's factory at Etruria and the family home Etruria Hall but in the event, and fortunately for the company, only the hall was sold. He continued as senior partner until his retirement to Barlaston Hall in 1876.

1859 Godfrey Wedgwood (1833-1905), son of Francis Wedgwood, partner in the firm from 1859 to 1891. He and his brothers were responsible for the reintroduction of bone china c.1876 and the employment of the artists Thomas Allen and Emile Lessore.

Kennard Laurence Wedgwood (1873-1949), son of Laurence Wedgwood, partner. In 1906 he went to the United States and set up the firm's New York office, which became Josiah Wedgwood and Sons USA, an incorporated subsidiary, in 1919.

Josiah Wedgwood, 1st Baron Wedgwood, (1872-1943), son of Clement Wedgwood. He was a distinguished Labour Party (UK) politician and Member of Parliament for Newcastle-under-Lyme for 36 years until elevated to the Labour benches in the House of Lords by Winston Churchill in 1942.

1930 Josiah Wedgwood V, son of Josiah Wedgwood IV, was Managing Director of the firm from 1930 and chairman until 1968; he is credited with turning the company's fortunes around. He was responsible for the enlightened decision to move production to a modern purpose-built factory in a rural setting at Barlaston. It was designed by Keith Murray in 1936 and built between 1938 and 1940. He was succeeded as managing director by Arthur Bryan (later Sir Arthur) who was the first non-member of the Wedgwood family to run the firm.

There were other Wedgwoods in British public life (in addition to those named here) who are mostly related to the extended family of Josiah Wedgwood.