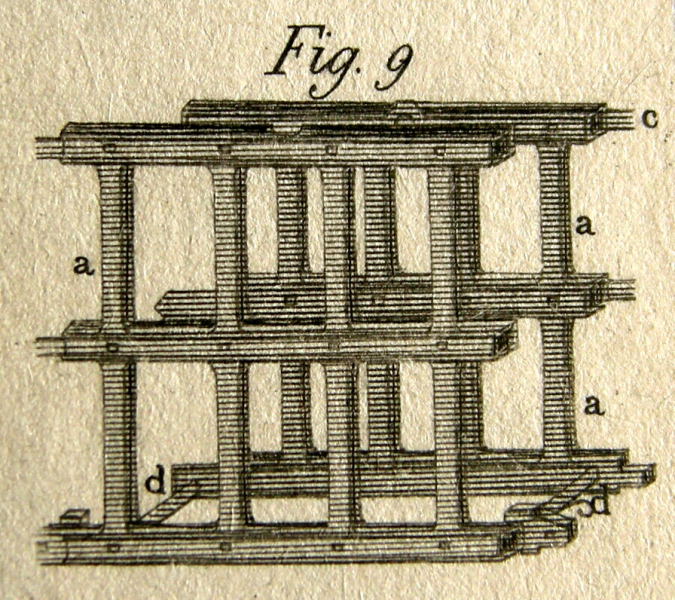 This shows a pair of cast iron voussoir panels cross-connected by transverse ties to an adjacent pair (from Heck's 'Iconographic Encyclopaedia'). 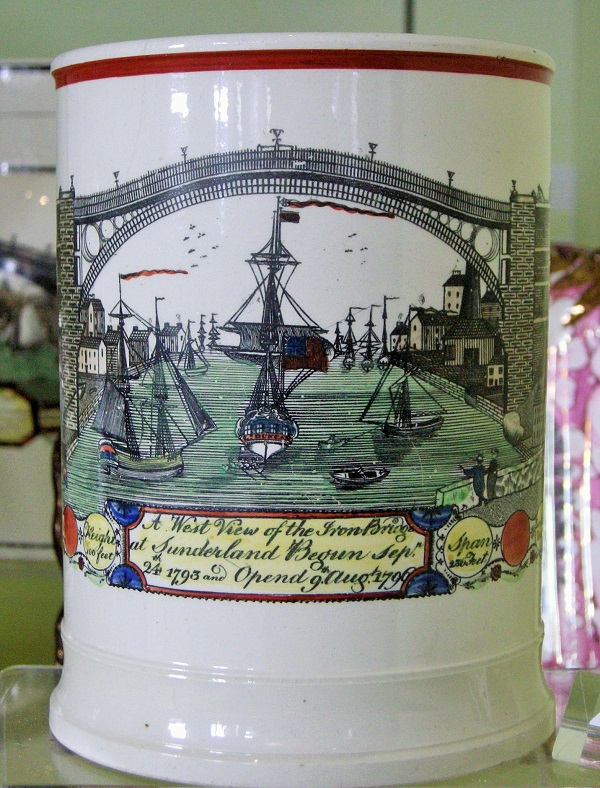 Copper plate used for producing transfer for mug, also in Sunderland Museum. Curiously, the spandrel rings are missing on the engraved plate 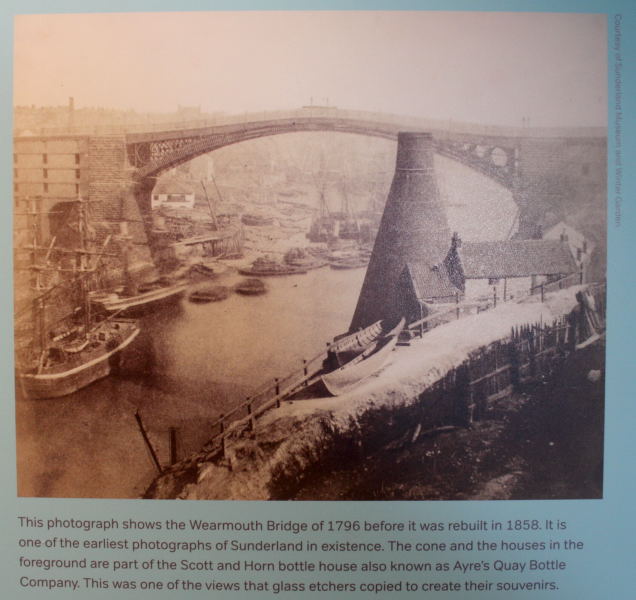 Photo of the first Wearmouth Bridge, displayed at the National Glass Centre in Sunderland 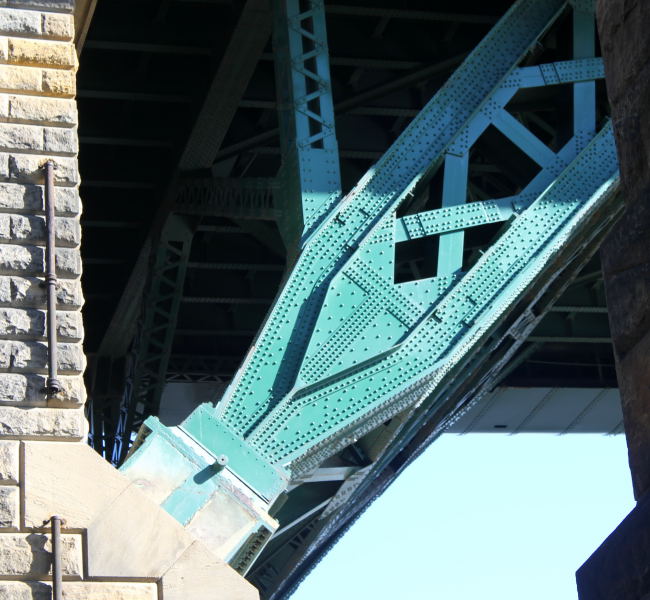 The current Wearmouth road bridge is a through arch bridge across the River Wear in Sunderland, opened in 1929. It is the final bridge over the river before its mouth with the North Sea.

The current bridge is the third Wearmouth Bridge in this position. The first opened in 1796, and then was reconstructed in the 19th century.

The first Wearmouth Bridge opened in 1796, with the foundation stone having been laid in September 1793. It was sponsored by Rowland Burdon, the MP. It is frequently claimed that it was designed by Thomas Paine following a model for a bridge over the Schyulkill River in Philadelphia, Pennsylvania. However, this is not the case - see below.

According to the plaque on the current bridge, its construction "proved to be a catalyst for the growth of Sunderland," since access between Monkwearmouth and Bishopwearmouth had previously only been by ferry, with the nearest bridge at Chester-le-Street. There was originally a toll for traffic and pedestrians, although tolls for pedestrians were abolished in 1846.

It was the second large cast iron bridge in the world, built after the famous span at Ironbridge, but was over twice as long with a nominal span of 240 feet, and only three-quarters the weight. Indeed, at the time of building, it was the biggest single span bridge in the world (72 m), matching the collapsed Trezzo Bridge.

By 1804 distortion of the arch was visible, with a bulge of 20". John Grimshaw (1763-1840), a Quaker and partner in the Deptford ropeworks, was enlisted to investigate. He considered that a flood during construction had scoured the river bed to leave the arch 12-13 in. out of true, and the bulge had increased with time. About a fifth of the supporting tubes had broken or fallen into the river, some of them soon after the bridge was completed. Fortunately the bridge incorporated a timber frame which had prevented its collapse. Grimshaw proposed modifications which included inserting diagonal braces between the arch ribs. Work was also undertaken to straighten the arch.[1]

From 1857 to 1859 it was reconstructed, with Robert Stephenson as Responsible Engineer, although due to ill health he delegated the work to George Henry Phipps (1807-1888). The bridge was stripped back to its six iron ribs, and three tubular wrought iron ribs were added. The hump in the middle was greatly reduced by raising the abutments. The bridge was reopened in March 1859.

Tram lines were installed in 1879, and the toll completely abolished in 1885.

To accommodate the growing volume of traffic, construction began on the current bridge in 1927. The new bridge was built around the old iron bridge to allow the road to remain open. During construction the new arches straddled the iron bridge, with the new abutments set further back from the river. The design of the new bridge was prepared by Messrs Mott, Hay and Anderson. The contract for the building of the new bridge was placed with William Arrol and Co of the Dalmarnock Ironworks in Glasgow (they also built the famous Forth Rail Bridge and the steel structure of Tower Bridge in London). It was opened on 31 October 1929 by the Duke of York (who would later become King George VI).[2]

It is not clear to what extent the credit for the design should be shared between Rowland Burdon and Thomas Wilson. Thomas Paine's name has been linked, but the link is tenuous. Paine had designed an experimental cast iron arch bridge, which was cast for him by Walkers of Rotherham. It was erected for exhibition at Lisson Grove, Paddington, London in April 1789. It was dismantled in 1791 and the cast and wrought iron parts returned to Rotherham. Some of the wrought iron strapping appears to have been re-worked and used on the Wearmouth bridge.[3]. Walker's supplied the iron castings for the Wearmouth bridge, and would have provided design advice through their technical manager, William Yates and his son, William Jr.[4]

H. J. Hopkins notes[5] that after careful investigation, Professor Lewis Gordon of Glasgow maintained that Rowland Burdon was engineer, architect, and paymaster. H J Hopkins states that 'It is probable, however, that the designer was Thomas Wilson'.

'WEARMOUTH BRIDGE -On Tuesday this superb structure was opened for the use of the public, with the promised procession and ceremonies, amidst an immense concourse of spectators from all parts of the kingdom. At nine o'clock, the Sunderland Volunteers fired royal salute from the battery. About ten, the procession, which had been previously arranged by a Committee of the Provincial Grand Lodge of Free Masons for the county of Durham, moved from Mr. Irvine's Inn, through the High-street and Bridge-street, to the South entrance of the bridge. This amazing structure measures in the span of the arch 236 feet, and in height 100 feet; the spring of the arch is only 33 feet, forming a very small segment of a circle: it contains about 250 tons of iron, 210 tons cast and the remainder wrought. The two piers which support the iron work are so high, that ships may pass under the bridge without lowering their masts, and you pass over on a level with the ground on each side. Many of the pieces of stone with which the-piers are built weigh seven or eight tons. The foundation was laid on the 24th of September, 1793. The artists for the iron part are Messrs. Walker, of Rotherham, who have obtained a patent for constructing bridges on this principle. It has been erected under the auspices of Rowland Burdon, Esq. M. P. for the county Durham.' [6]