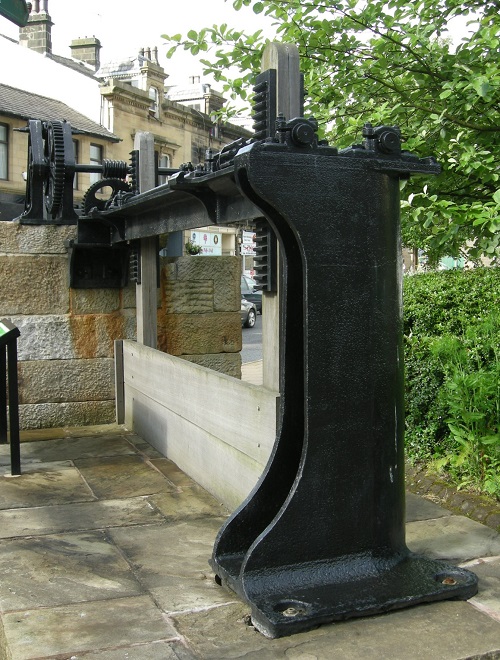 1889 'Re-starting Waterside Mills Christening New Engines. Waterside Mills (Messrs. Fielden Bros., Limited), resumed full operations on Thursday morning, after having been partially closed for ten weeks, during which four new boilers by Messrs. Galloway, and a pair of new beam engines Messrs. Clayton, Goodfellow and Co., Blackburn, have been put in. The engines are a magnificent and massive piece of work. They were started Wednesday at noon by Mr. John Fielden, J.P., D.L., the senior partner of the firm, and christened by him "Sam" and "John" amid loud plaudits from a large company which had assembled in the engine-house.'[1]

The spinning department was closed in 1891, and the Mechanics' Dept in 1894, leaving only weaving to be carried on there by the Fieldens.[2]

Originally named Laneside Mill. Established in 1782 by Joshua Fielden of Edge End Farm. In the late 19th century a New Mill was built, which operated until 1961 and started to be demolished in sections thereafter. The Old Mill was demolished in the early part of the 20th century following a fire in 1901, which caused extensive damage. A Morrison's supermarket has now been built on part of the site. A sluice gate which once regulated the flow of water from Walsden Water to the Millpond had to be removed because of flooding problems, but the gate (and some masonry) has now been positioned in Fielden Square (see photos) as a reminder of the industry.[3]

The firm diversified into palstics, establishing Waterside Plastics Ltd, which was sold to its management in 1972, and ceased trading in 1990.