The watermen on the Thames established the Waterman Steam Packet Company to compete with the Woolwich Steamboat Co.

c.1843 Owned 12 steam boats, one of which was built at Napier's Millwall works (see notes below).

Notes on Waterman's boats from the biography of David Napier[1] 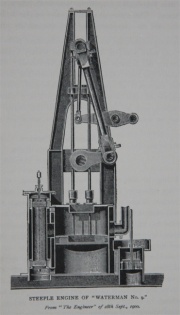 The Steeple Engine of 'Waterman No. 9'

"Of the twelve boats owned by the Waterman Steam Packet Company, eleven were engined by the Messrs. Penn (although the name of the last fitted by them was Waterman No. 12). These had oscillating engines, embracing their makers' latest improvements.

"Of the one steamboat of the dozen (Waterman No. 9) not engined by Penn there is something worth noting. Possibly it may not be known that the mystic art of ‘betting’ is not altogether a product of these enlightened days. It flourished half a century ago, and heavy bets were made on the performances of some of our river steamboats, so high had the spirit of rivalry attained among the captains, if not the owners, of these boats. The order for Waterman No. 9 boat was therefore given to her builder, Mr. David Napier of Millwall, under rather onerous conditions. She was to be constructed of iron, and fitted with engines, under a guarantee that she should, when completed and tried, beat every other vessel of her class on the river, while burning less fuel, and this she did thoroughly. The dimensions of this vessel were: Length between perpendiculars, 107 feet; breadth at paddle boxes, 15 feet; depth under deck, 7 feet 2 inches; draught of water, 2 feet 9 inches. She was propelled by a single engine—known as a 'steeple-engine'— having a cylinder 30 inches diameter, with a piston stroke of 3 feet. Its piston was fitted with four piston-rods, whose upper ends were attached to a four-armed crosshead, from the centre of which the connecting-rod hung, the lower end of the latter embracing the crank-pin brasses, with a strap secured to it with a gib and cotter. The air, feed and bilge pumps were worked by a rocking beam, one end of which was connected by links to the piston-rods crosshead. The engine was of the surface-condensing type. The vessel being double-bottomed, the space between the two bottoms was used as a condenser, into which the steam, after use in the cylinder, was admitted, its condensation being effected by external cold, the resultant fresh water being used for boiler feed. This engine, invented by Mr. Napier, offered many advantages by its compactness and direct action for river-boat service. Its one objection was the protrusion of a large portion of the machinery above the deck, which rendered it unsuitable for sea-going vessels.

"The boiler supplying this engine with steam was of the vertical cylindrical type, 7 feet diameter, with a circular fire-grate, over which was a 14-inch water-space, in whose upper or tube-plate was a series of concentric circles of tube holes, fitted with water-tubes. Their lower ends communicated with the bottom water-space, and the upper ends with the water above the top tube-plate, the hot air and gases in their passage from the fire-box permeating among the tubes, — which were of brass, — and thus imparting their heat before reaching the chimney. The steam-producing power of this boiler was very great, and its consumption of fuel exceedingly moderate.

"As competing steamboats were plying to the same ports as Napier's, although none were equal in speed, a keen rivalry appears to have existed between the masters of the respective vessels. This at times led to incidents on both sides manifesting more zeal than discretion, and a total disregard of passengers' wishes and convenience. A curious episode of this nature involved no less a personage than Charles Dickens, and his indignant letter on the subject to Messrs. Napier may be quoted, as illustrating these amenities of old-time travel."