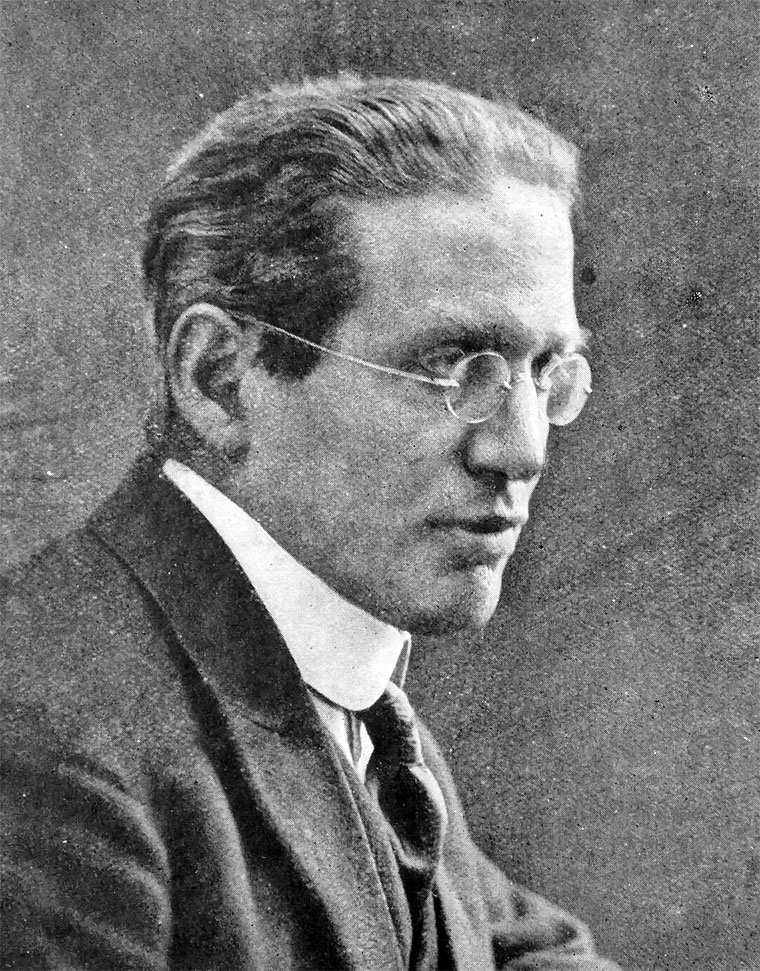 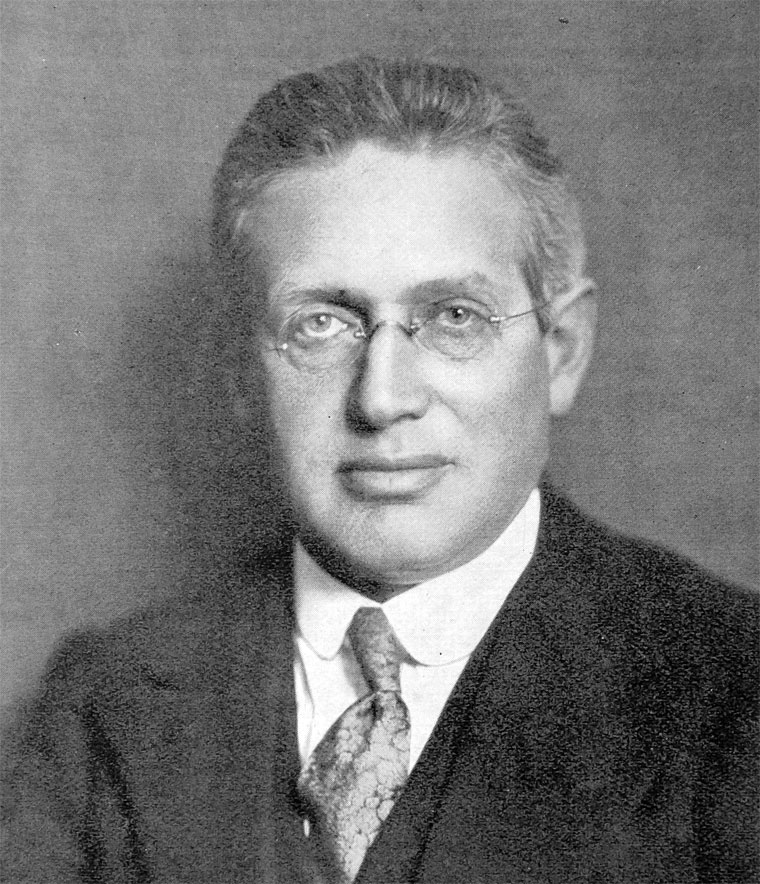 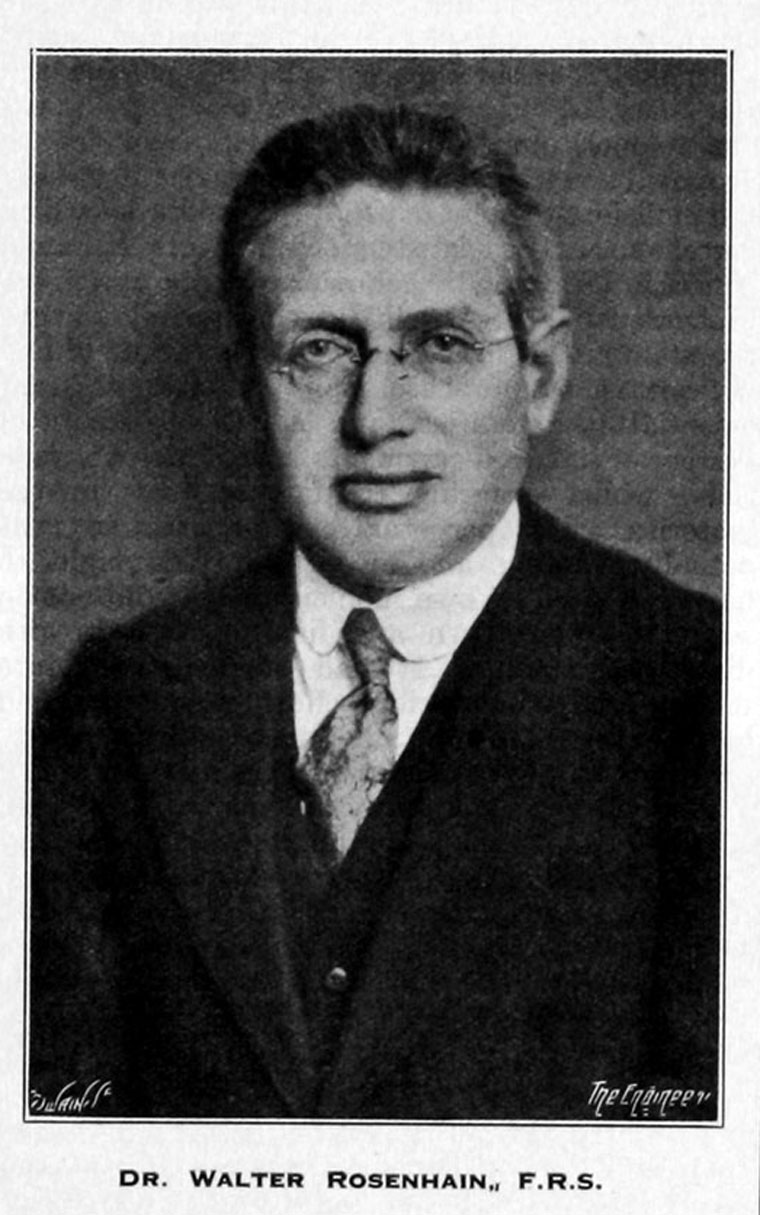 Dr. Rosenhain came to England from Australia in 1897 or 1898. He went to Cambridge where he worked under Sir Alfred Ewing, who started him on his metallurgical career.

1901 He was appointed Scientific Advisor to Chance Brothers of Birmingham.

1908 He Secured the appointment at the National Physical Laboratory which gave him his life's work.

1910 Presented to the Institution of Mechanical Engineers The Properties of some alloys of Copper, Aluminium and Manganese. [1]

1926 Vice-president of Institute of Metals

In 1897 he came to England as a Research Scholar of the 1851 Exhibition Commissioners, and took up residence at Cambridge for three years, where he was engaged for some time in research work under Professor J. J. Thomson and Professor (now Sir) Alfred Ewing.

In 1899 he took up the study of metallography, and this soon brought him into contact with Professors Roberts-Austen and J. O. Arnold and other eminent metallurgists. In that same year, Dr. Rosenhain and Professor Ewing, in a paper before the Royal Society, announced their discovery of the slip-bands which occur in metals after subjection to mechanical deformation.

Leaving Cambridge with the B.A. degree in 1900, Dr. Rosenhain became chief chemist and scientific adviser to Messrs. Chance Bros., Ltd., glass manufacturers, of Birmingham, and for six years he was principally engaged in connection with optical glass and lighthouse apparatus; but he continued his studies in metallography, and in the spring of 1904 contributed a paper on "The Plastic Yielding of Iron and Steel" to the Iron and Steel Institute, which he had joined in 1901. He was awarded a Carnegie Research Scholarship, and, in 1906, received the Carnegie Silver Medal at the hands of Mr. (now Sir) Robert Hadfield for his memoir on "Deformation and Fracture in Iron and Steel."

In 1906, Dr. Rosenhain took charge of the newly-established Department of Metallurgy and Metallurgical Chemistry at the National Physical Laboratory. At the commencement the staff numbered four individuals; twenty-five years later, Dr. Rosenhain had over seventy persons working under his direction, and the Laboratory had meanwhile become world-famous for the many important researches carried out there. That space of twenty-five years was a period of tremendous advances in metallurgical science and practice, and to these Dr. Rosenhain made many valuable contributions.

A very large amount of original research, especially in relation to the physical structure of metals and alloys and the mechanism of failure under stress, is associated with his name, and many papers, either from his own pen or written in collaboration with others, have appeared-in the Journal of the Iron and Steel Institute.

He was the author of two valuable text-books, "Glass Manufacture," and "Introduction to the Study of Physical Metallurgy."

Before and during the war he was largely responsible for the development of the light wrought aluminium alloys used in aircraft construction and for parts of internal-combustion engines. In this connection he took a leading part in the investigation of the mechanism of age-hardening, and introduced many improvements in methods of casting. He early appreciated the importance of metals of high purity for use in metallurgical research, and under his supervision chromium, manganese, beryllium, iron and other metals of extreme purity were prepared in adequate amounts and used in scientific researches, among which may be mentioned in particular the investigations on iron alloys carried out for the Iron Alloys Research Committee, which were published by the Iron and Steel Institute.

More recently Dr. Rosenhain did much work involving the use of high-frequency and other electric furnaces of a special type, and he gave much time to the study of special refractories; many improvements in metallurgical processes dependent on the use of better refractory materials were due to him.

On June 1, 1931, Dr. Rosenhain relinquished his position as Superintendent of the Metallurgical Department of the National Physical Laboratory, and devoted himself to consulting work. Dr. Rosenhain was noted for his remarkable command of foreign languages; he was able to pass from one language to another with perfect facility and without halting or pause. He was a very fluent speaker in English, and his contributions to discussions at meetings of the Iron and Steel Institute, at which he was a regular attendant, were noteworthy for their interest and clarity.

Dr. Rosenhain belonged to a number of scientific and technical societies. He was a Fellow of the Institute of Physics and a Past- President of the Optical Society, London. At the time of his death he was President and British Delegate on the Permanent Committee of the International Association for Testing Materials - an association in the affairs of which he had taken a very active personal interest, having acted, among other things, as President of Section A (Metals) at the Zurich Congress of the Association in 1931.

He was an original member of the Institute of Metals, and became a Member of Council in 1911, a Vice-President in 1918, and President in 1928; in 1929 he was elected a Fellow of that Institute. In recognition of his great services to metallurgical science and the light which he had thrown upon so many of the more obscure phenomena of iron and steel manufacture, he was awarded the Bessemer Gold Medal of the Iron and Steel Institute in 1930. Dr. Rosenhain's election to Fellowship of the Royal Society in 1913, at the early age of thirty-eight, was a signal honour which was fully indicative of his great merit.