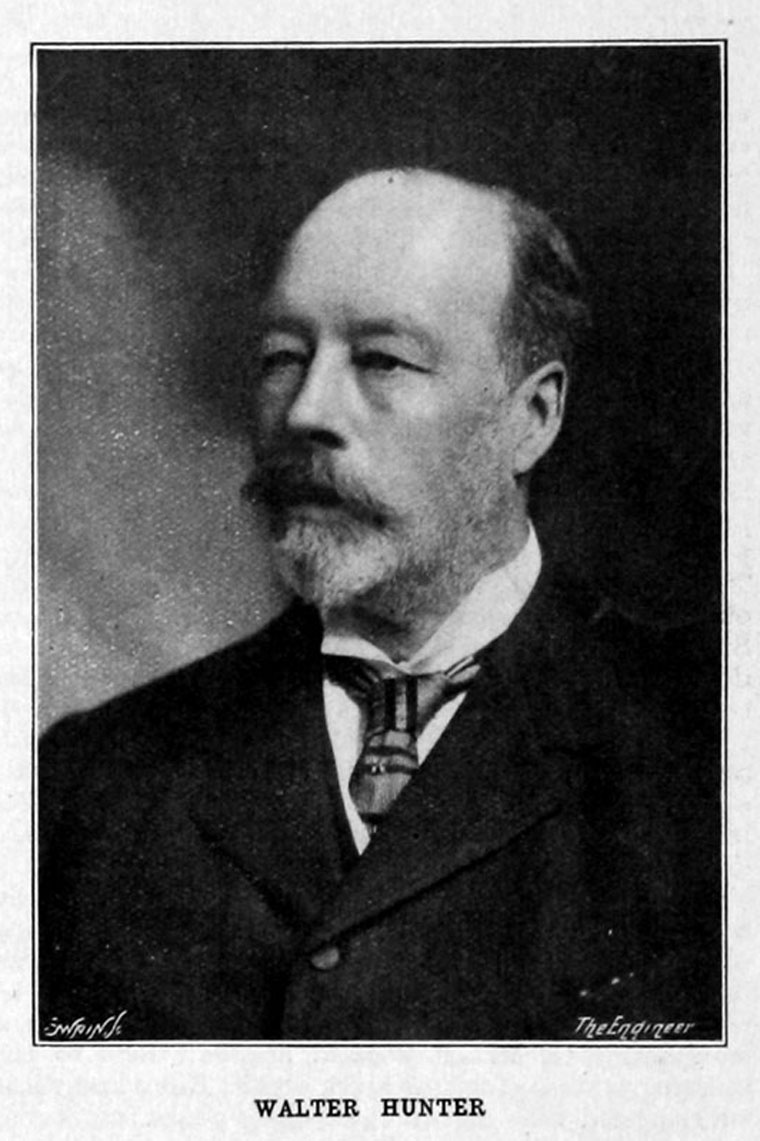 1840. Born at Bow, Middlesex, son of James Hunter, (who was, presumably, the son of Walter Hunter)

Senior partner in Hunter and English.

1889. Elected member of the London Country Council for Bow and Bromley.

Influential in obtaining the sanction of the Council to the Blackwall Tunnel Scheme.

1902. Entered into partnership with Reginald Empson Middleton and M. B. Duff as Middleton, Hunter and Duff.

He was educated at Stepney Grammar School, King's College School, and College du Havre, and was articled to his father, James Hunter, of the firm of Hunter and English, engineers and millwrights, Bow, of which firm he became head in 1883.

In 1889 he was elected a Member of the London County Council for Bow and Bromley, and for three years served as Vice-Chairman of the Bridges Committee, and represented the Council upon the Lee Conservancy Board. In the former capacity he was associated with the Blackwall Tunnel Scheme and the reconstruction of the Barking Road bridge.

Upon leaving Bow in 1896 he became engineering director of the Grand Junction Waterworks Co., to which he had been appointed in 1895, and he carried out the Staines Reservoirs Scheme in connexion with the water supply of London.

In 1902 he started as consulting engineer in partnership with Messrs. Middleton and Duff, and in the following year he proceeded to South Africa and reported upon a water scheme for Johannesburg and the Rand Mines.

In 1907 he was appointed by the Crown Agents for the Colonies to go out to the Gold Coast in connexion with the water supply of Accra and Seccondee. He also acted as Consulting Engineer for the Lagos Water Supply, and reported upon that of Mombasa in East Africa. A short time before his death he was engaged on a water supply scheme for Coomassie and Cape Coast Castle. Mr. Hunter was a Vice-President of the Institution of Civil Engineers and a Justice of the Peace for London and Middlesex.

His death took place at Westminster on 9th September 1914, at the age of seventy-four.

He was elected a Member of this Institution in 1877.