Grace's Guide is the leading source of historical information on industry and manufacturing in Britain. This web publication contains 146,075 pages of information and 231,597 images on early companies, their products and the people who designed and built them. 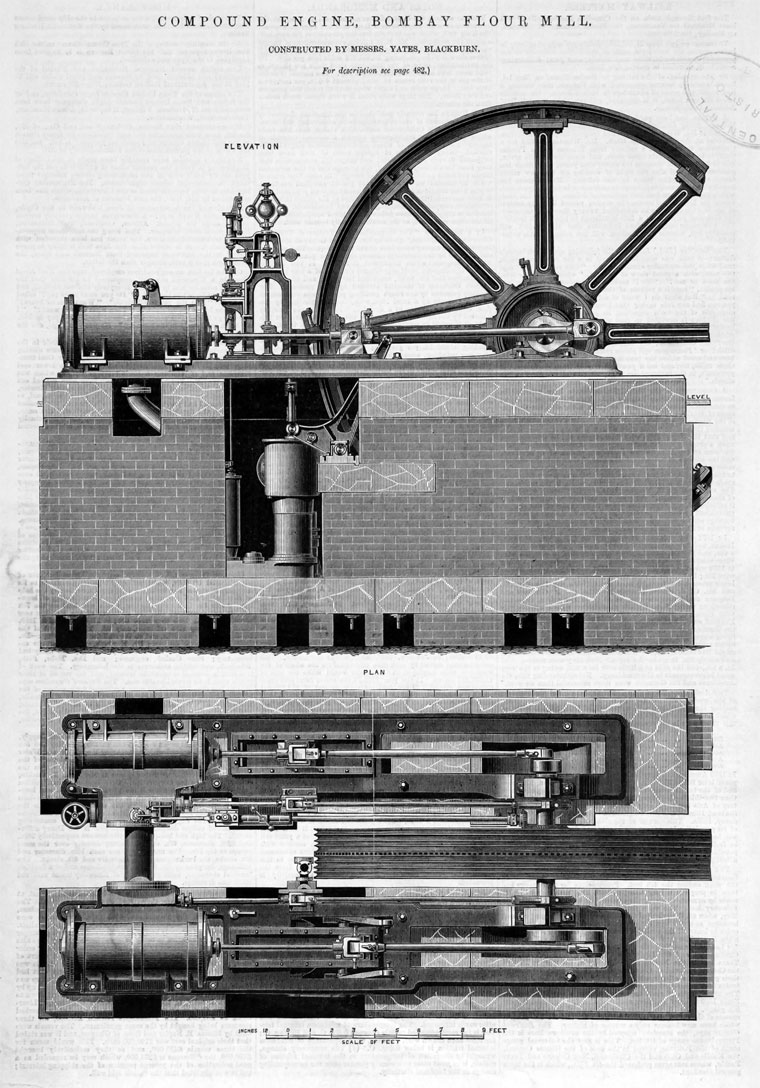 1850 'TUBULAR GIRDERS FOR THE CLITHEROE RAILWAY.
To the Editor of the Blackburn Standard.
Sir, — We find contained in your paper of last Wednesday, an error respecting the weight of the tubular girders sent from these works last week. Instead of their, as was stated, weighing 15 tons only, the two should have weighed upwards of 30 tons, — the weight of the cross girder added would make the whole bridge weigh upwards of 50 tons. You will oblige by correcting the error, in your next paper.
I am, sir, Your obedient servant, WM. YATES. Canal Foundry, March llth, 1850.'[1]

c.1851 Presumably father and son partnership of W. and J. Yates was formed when John reached his majority

1857 The Exors of William Yates made a steam engine for the Wellington Mill, near Turton. It was given the name 'The Fruits of Industry'[2]

1864 Accident: 'FATAL ACCIDENT AT THE CANAL FOUNDRY.
ONE MAN KILLED AND FIVE INJURED
Shortly after noon yesterday, an accident resulting in the death of one man and the serious injury of five others, occurred at the Canal Foundry, Eanam. It appears that six labourers in the employment of Messrs. Yates, machinists, were removing an entablature bottom belonging to an engine from the planing pit to a piece of ground in front of the smithy. The enormous mass of metal, which weighed about twelve tons, had been hoisted on to a travelling crane, and moved along to its destined place in safety; but while the men were lowering it the vibration caused by its too rapid descent caused the cross beam forming part of the carriage way on the top of the scaffolding to break, and the result was that the whole mass fell to the ground, bringing down the scaffolding, carriage, and winches along wish it. One of the men, named Joseph Barker, who resided at Lane Ends, was killed by the accident,— a portion of the falling structure having alighted on his thigh, with such violence as nearly to sever it from his body.
Two other men, named John Wilding, who keeps the Red White and Blue beerhouse, in Bancroft-street, and Thomas Dewhurst, of Union Buildings, were severely injured; and the other three,— Michael Hartley, Birley-street, Daniel Watson, Long Row, and Jacob Cotterill, Bottomgate, — were also hurt, though less seriously. Two men who were working on the ground immediately beneath the spot where the entablature was being lowered,— namely, Jas. Woods, junior, engineer, and Edward Wrigley, planer, — were knocked down by portions of the crane, but fortunately did not sustain any serious injury.
Messengers were at once sent out to obtain the services of a doctor, and Drs. Cheesbrough and Morley were promptly in attendance, examined the men, and applied such remedies as they thought necessary.
The scaffolding was all of good sound timber, and the wooden beams of the carriage way were each 15 inches by 12 thick, and supported by iron tension rods of l¼ inch in diameter. In length they were 38 feet. About a month ago, the entabla- ture was removed to the planing pit by means of the same crane, and it has often hitherto borne similar weights. The part broken was erected about three years ago, and the remaining portion two years previously.' [4]

1879 Supplied an engine to the Newbattle paper mill of Robert Craig and Sons.

1890 Dissolution of the Partnership between William Yates, Frederick Yates, Sydney Robert Yates, and William Thom, at the Canal Foundry and Engineering Works, and the Victoria Boiler Works, in Blackburn, Mechanical Engineers and Boiler Makers, as William and John Yates; business carried on by the said William Yates and William Thom alone, in copartnership together, under the style of Yates and Thom[6]

Was there perhaps a connection with Parkinson and Yates, iron founders?