The valve on the extreme left is an inlet valve, operated by a variable profile cam. The axial position of the cam is determined by the governor. The exhaust valve has a simple fixed cam 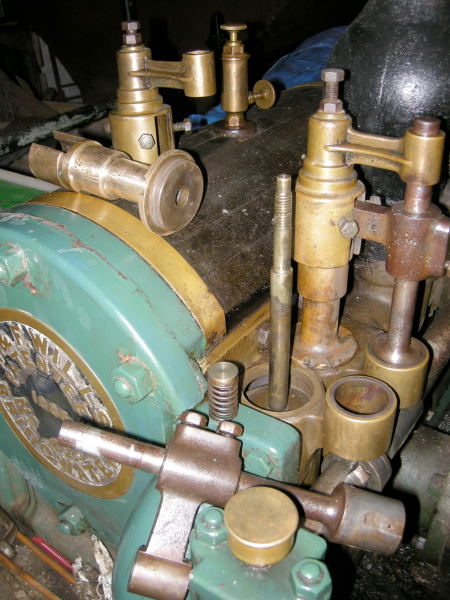 Exhaust valve assembly partly dismantled, the valve itself remaining in place. Each valve is of the double beat type, and this arrangement, added to the fact that there are four valves in the manifold, makes for quite a complex manifold casting. 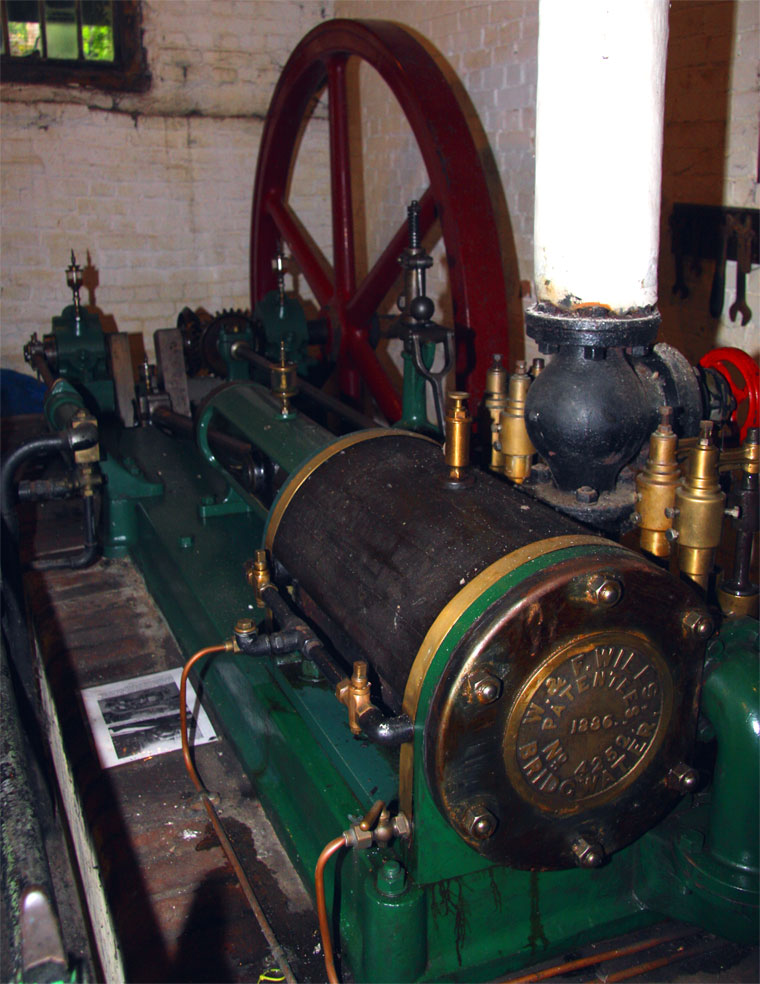 Founded in 1876 by Walter and Frank Wills

Originally in small premises among terraced houses at Polden Street, moving in the 1890s to Perseverance Works on Salmon Parade.

Built a number of stationary steam engines, one of which is preserved in running order at Westonzoyland Museum. This has an interesting arrangement of cam-operated poppet valves, the inlet cams providing variable valve lift under control of the governor.

1883 A advert for the sale of equipment following the dissolution of the partnership of Stark, Ford and Stark, provision merchants of Bridgwater, included a 2 HP vertical engine by Wills. 3" bore, 5" stroke. [1]

1888 Bridgwater Carnival: 'A car, devoted to Messrs. W. and P. Wills, engineers, contained a partly complete 4-horse power vertical cross-tube boiler, and portable forge in full blast. The rivets were heated and the boiler rivetted by the boiler-makers and their mates as the procession went along. The car was got up and manned from the fast-growing "Perseverance" works, of which Messrs. Wills, the patentees and makers of the new valve-gear engines, are the energetic and deserving proprietors, and formed a realistic illustration of every-day life at the works.' [2]

1888 Supplied a 6 HP steam engine to the dairy factory in Dampiet Street, Bridgwater[3]. It was a horizontal engine supplied for turning butter churns, separators and a hoist at the small dairy of the Bridgwater Dairy Supply Company at the corner of Blake Street and Dampiet Street in the centre of Bridgwater. [4]

1891 'Bridgwater Town Council .... Mr Geen and Captain Pearce, Polden-street, appeared in support of acomplaint of alleged nuisance caused by the smoke and smut, &c., discharged from Messrs Wills' foundry. It was stated, however, that the firm had undertaken to raise the chimney referred to in order to remedy the nuisance; and Captain Pearce, who also complained of the noise caused by a bell in connection with the same establishment, was referred to the magistrates for his remedy. Mr James directed attention to the fact that the 12th section of the Municipal Corporations Act disqualified a councillor or his partner from directly or indirectly sharing the profits of any contract with the Corporation, and he mentioned that the tender of Mr W Wills had been accepted for the removal of the old weighbridge. Mr. F Wills asserted, however, that in this matter Mr Walter Wills was not his partner, and that he (Mr F Wills) would derive no profit therefrom in any shape or form.' [6]

1894 Built steam boat 'Pioneer' for the Somerset Drainage Commission. This used a centrifugal pump to supply a water jet for eroding silt in the River Parrett. This worked for 23 years, and her success led to other contracts, including the 'Eroder' for Bridgwater Docks. [7]

1901 BRIDGWATER. A NEW FACTORY.—We are pleased to hear that the trade of the town is about to have an important addition, in the shape of another shirt and collar factory, Mr. A. E. Rice, formerly a partner in the West of England Collar Manufacturing Co., at Chard, having purchased the King-street laundry and cottages adjoining. These premises are being turned into a factory, the contract having been secured by Mr. T. Stockham, builder, of this town, while the machinery will be put in by Mr. Wills, of the "Perseverance" Works. ....'[8]