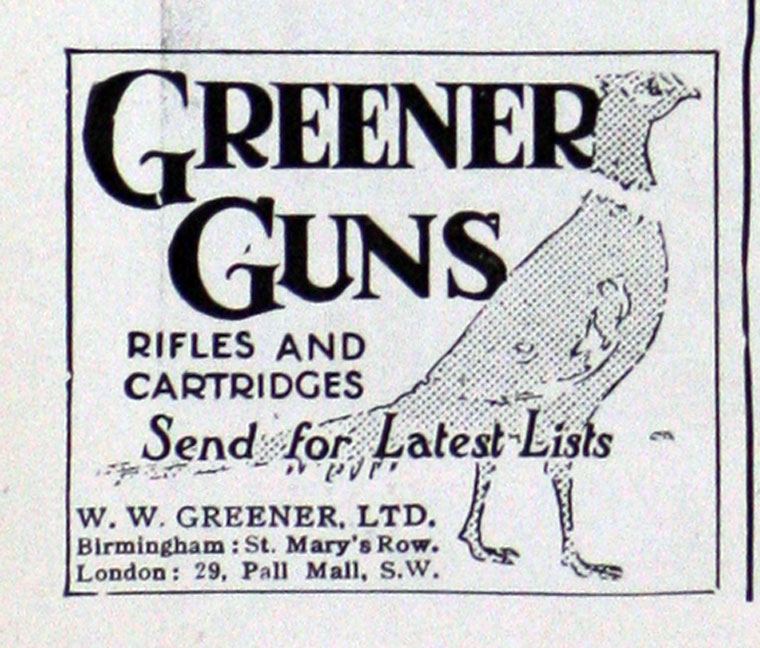 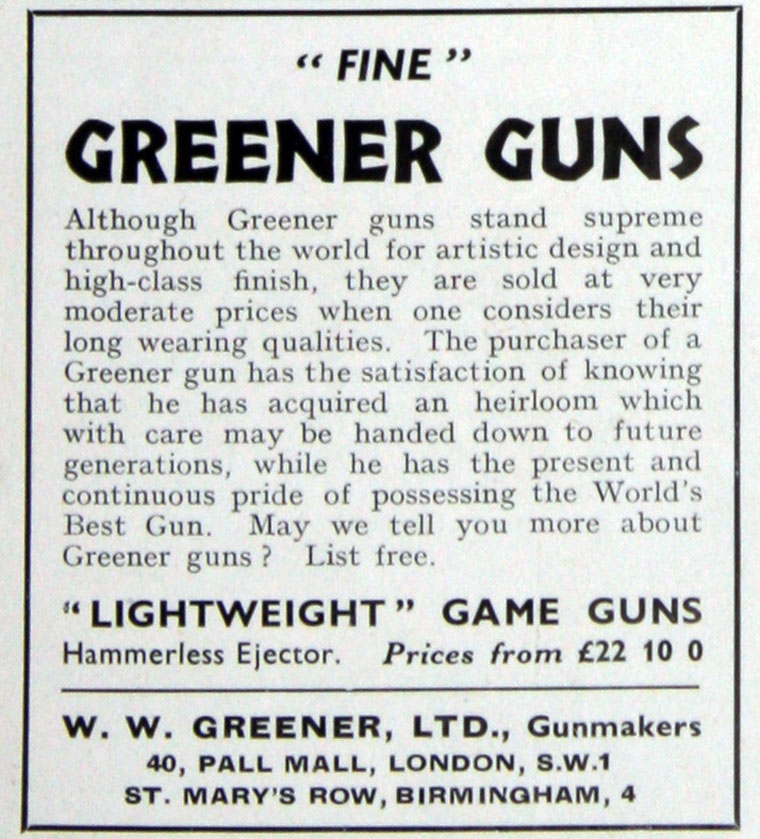 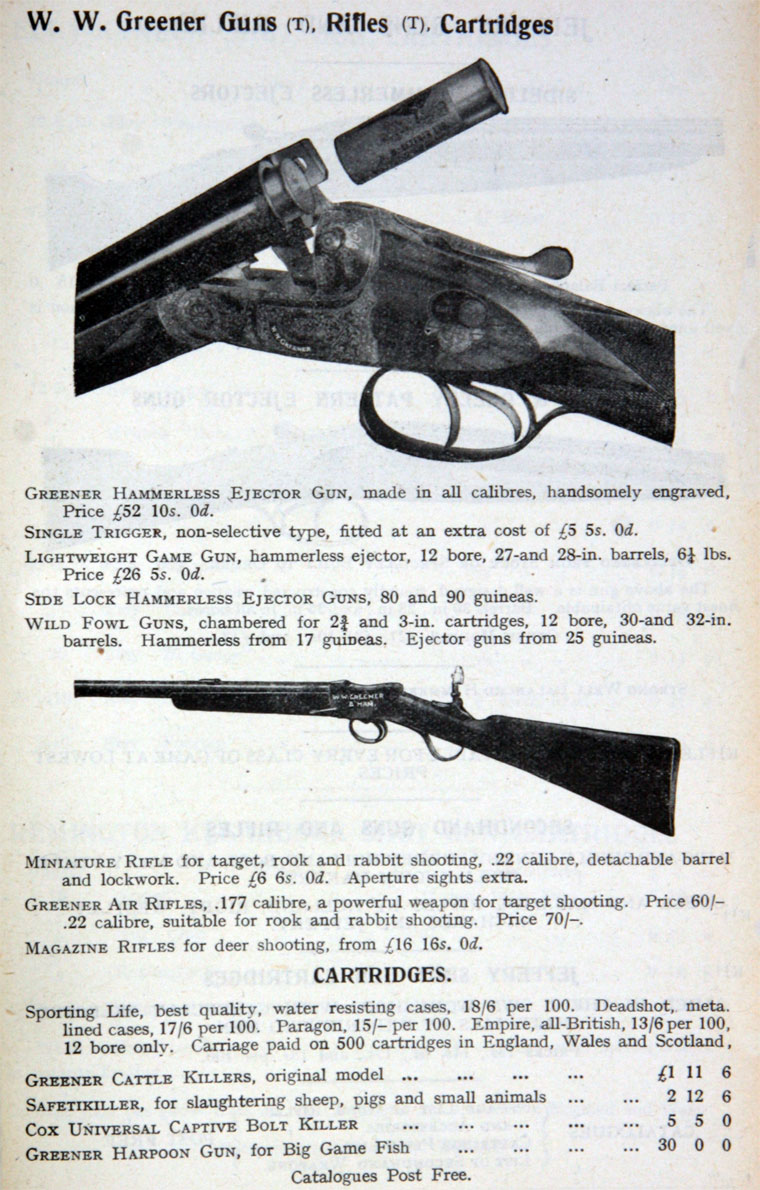 William Greener was the first generation of the Greener family gun makers, who started his career as an apprentice to John Gardner in Newcastle-Upon-Tyne.

Later, as a journeyman gun maker he worked for Joe Manton in London before marrying.

1829 He returned to Newcastle-Upon-Tyne and set up his own gun making business.

1844 He experienced difficulties in obtaining materials so in 1844 he moved to Birmingham and in, or near that city, the business has remained ever since.

William Greener was a prolific inventor and over his lifetime he invented: the expansive bullet (1835); an electric light (1846 - this was long before the modern 'Ediswan' lamp was patented in 1879); a device to open the four gates of a railway level crossing simultaneously; a self-righting lifeboat (1851) and modifications to the Miners Safety Lamp. But first and foremost he was a gun maker and the quality of his guns soon attracted the rich and famous; amongst these was Prince Albert, consort to Queen Victoria.

1851 At The Great Exhibition he won two gold medals and a diploma "for guns and barrels, perfectly forged and finished" - the highest honour obtainable.

1855 He went on to win two silver medals at the Paris Exposition, but throughout his life he made percussion muzzle loaders and was sceptical of the new breech loaders, then in their infancy. William wrote three books, The Gun in 1834, The Science of Gunnery in 1846 and Gunnery in 1858 published in that year. He was instrumental in reforming the Gun Barrel Proof House in the Act of 1855 after a pamphlet, he produced in 1846, 'The Proof House - the Bane of the Trade' influenced politicians and the public to stamp out corruption and bad practices.

1869 After William's death, his second son, William Wellington Greener, continued to make high quality sporting and military guns. Like his father, he was also an inventor and many of his inventions helped to shape the breech-loader, which by that time was developing into the modern sporting gun we know today.

1875-79 Probably W. W. Greener's greatest contribution to gun making was perfecting the system of choke boring, which allowed him to win all The Field Trials from 1875 to 1879 and led to most wing shots using Greener guns to win prizes and competitions throughout the world. The perfection of choke boring and the famous cross-bolt (which he invented in 1873 to strengthen the action of breech loaders) are probably what he will be remembered for most.

1881 Like his father he wrote books - the most famous of which The Gun and its Development was published in 1881. This book, like The Breechloader and How to Use it, published in 1892, ran to nine editions.

1900 By the turn of the century, he had the world's largest sporting gun factory employing over four hundred and fifty skilled craftsmen.

1920 The firm was incorporated into a Limited Company.

WWI. Production was switched to military requirements during the war.

Post-WWI. During the period between the World Wars, demand for the very high quality sporting guns, which had been made between 1880 and 1914, diminished. The company under the two brothers, and later Leyton Greener, Harry's son, concentrated on well made, but less expensive 'Empire' models and the single barrel GP (General Purpose) shotgun, developed from a quasi-military riot control shotgun supplied to the Egyptian police force.

WWII. Production once again switched to military requirements during the war.

1965 Webley and Scott acquired the gun-making side of the business[5], and continued to make the single barrel GP for a few years. The "Greener" gun was used by riot police.

1967 The building of the inner ring road in Birmingham meant the factory complex fronting St Mary's Square had to go, so in 1967 the company was sold, the old factory with its imposing Victorian edifice was pulled down and production for the company as a family run business ceased.

1985 The company was bought its present owners; Graham Greener, W. W. Greener's great grandson, David Dryhurst and Richard Tandy, two of the country's finest gunmakers and Ken Richardson who made accessories for the gun trade. In the next couple of years important decisions were made which resulted in a return to making best quality sporting guns once again.

1987 To promote this, Graham Greener decided to build the 'New St. George' 12 bore side-lock. This design was chosen as the company was now making very best quality side-locks again and the lock plates provided a large area for some very special chiselled relief engraving of St. George and the Dragon.

1992 Finished and engraved by Alan and Paul Brown, this gun led to many orders being placed for similar models, and sets of guns ranging from 28 to 12 bores in the years that followed.