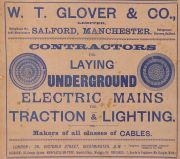 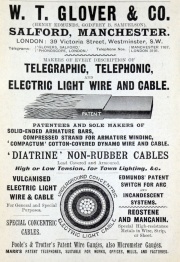 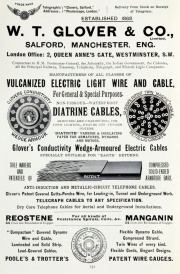 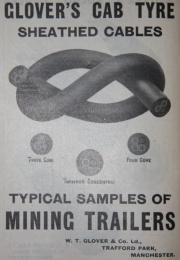 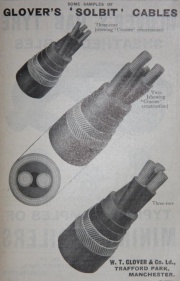 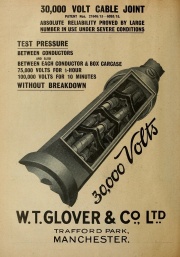 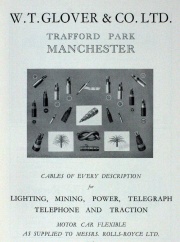 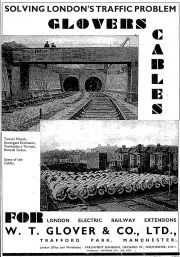 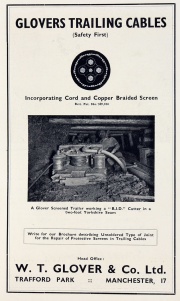 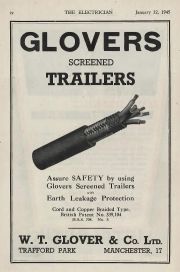 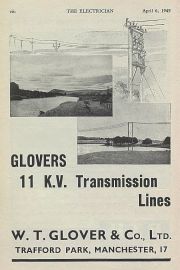 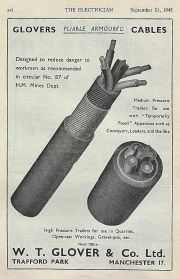 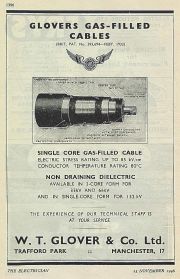 1868 Company founded with premises at the Bridgewater Street Iron Works in Salford by Henry Edmunds and Walter T. Glover. Walter T. Glover, was a commercial machinery agent for the Lancashire cotton industry.

Glover was in touch with George T. James, a Nottingham engineer who had patented machines for the manufacture of cotton braid and cord. The machines made cotton-covered wire used for crinolines and lead strips covered in cotton for use as hair curlers. Glover saw the potential for applying this technology to the electric cable industry and formed the Salford Electrical Wire Works, in association with the Bridgewater Street Iron Works. The company made cotton-covered and braided, insulated copper wires for use on bell, signalling and telephone circuits.

At some point incorporated as Walter Glover and Co.

1880 Glover's then began to make and sell the associated cable-making machinery. As trade expanded, the company required more space and in 1880 opened the Springfield Lane Cable Works.

1880s During the early part of the decade, factories and wealthy private homeowners began to use electric lighting. This required better insulated cables than had previously been made. Glover's started to manufacture cables covered with between one and three layers of rubber strip, waterproof tape and compounded cotton braid.

1887 When the 1887 Manchester Jubilee Exhibition opened, Glover's had its own stand and also provided cabling for the lighting of the entire site. This was probably the largest lighting scheme undertaken in Europe at the time, and took ten tonnes of copper.

Late 1880s. The company began to make cable for underground use. These lead-sheathed cables had copper conductors insulated with oil-impregnated jute wrappings. The company began to patent and sell lead presses for sheathing cables and lead tubes. They exported to a number of mainland European countries, including Norway and Sweden.

1895 Henry Edmunds, a partner in the company since 1886, managed the business on his own until 1895 when Godfrey Samuelson joined Glovers. Under Edmunds’ direction the company thrived.

1898 Glover's became a limited company. W. T. Glover and Co was registered on 16 February, to acquire the business of insulated wire manufacturers of the firm of the same name. [2]

1902 The company moved to Trafford Park and secured the exclusive rights for the supply of electricity to all the roads, streets and premises of Trafford Park, building a power station there, on the banks of the Bridgewater Canal. The company continued to be very successful. It began to make flexible cables for use in mines, a field where its engineers became acknowledged as the world leaders.

By 1908 they had carried out over 200 mine shaft installations.

WWI. During the First World War, Glover's made cables for the government war effort. It became a controlled establishment in August 1915. Women were employed in greater numbers during the war and, by 1918, 80% of employees were female. During the war, Glover's set up a piggery on the south side of the Trafford Park site, to help supplement canteen supplies. (It closed in 1950 when the company needed the space to expand).

1919 In June, Glover’s were taken over by Vickers Ltd. Although Vickers held the majority of the shares, Glover's kept its name and management.

1920s The early 1920s were a difficult period for the company. Workers were sometimes suspended for days or weeks and wage rates fell in the post-war slump. In the mid-1920s, business picked up.

1929 The Vickers group was reorganised and the shares in Glover’s were secured by Sir Tom Callendar of Callenders Cable and Construction Co. Some shares later went to W. T. Henleys Telegraph Works Co and British Insulated Cables.

WWII. During the Second World War, the company again made cables for the government and the armed forces.

The factory escaped damage during the bombing of Trafford Park in December 1940 but was damaged by incendiaries in March 1941.

1944 As part of the war effort Glover's made HAIS armoured lead pipe for operation Pluto, the Pipe Line Under The Ocean. For six months an average of 1,000,000 gallons of petrol a day were pumped across the English Channel through PLUTO to provide petrol for the Allied invasion forces.

Post-WWII. The company continued to research. It built a thermoplastics shop on the south side of their Trafford Park works, in anticipation of the need for PVC (polyvinyl chloride). It was also making high voltage submarine power cables, used to link centres of population with sources of generation.

1959 Glover's submarine cables were used to link England and France, and the north and south islands of New Zealand. However, although the company appeared to be doing well, there was increasing competition to supply cables. The south side of the Trafford Parks works was integrated into the newly formed Wiring and General Cables Division of British Insulated Cables (BICC).

1970 The Trafford Park factory was closed, but the Glover brand continued as part of BICC.