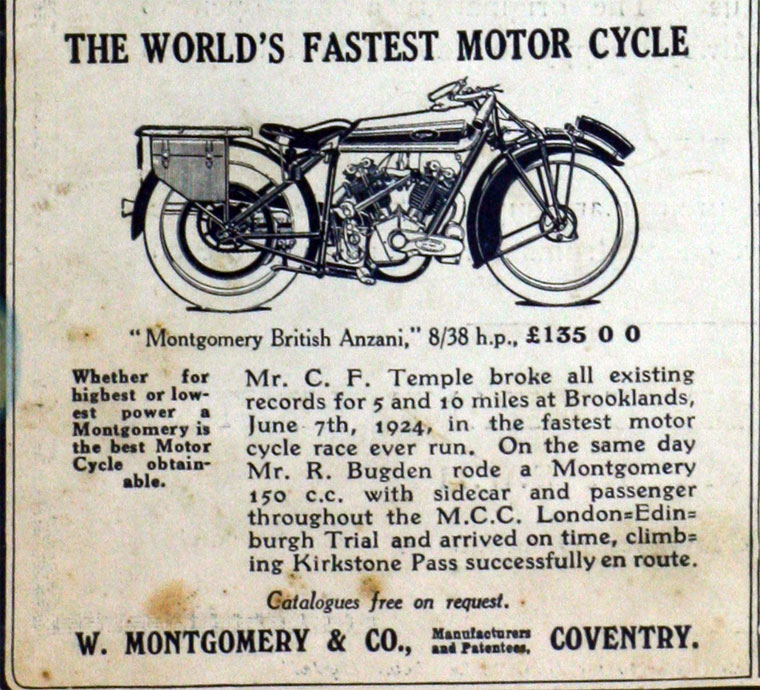 of Bury St Edmunds and then of Coventry.

Montgomery were motorcycles produced from 1905 to 1940.

1892 Started as a cycle company in Bury St Edmunds

1904 Motorcycles were first built in Bury St Edmund's, Suffolk until 1911. Manufacture then moved to Coventry, where it remained. At this time it was run by the brothers William Montgomery and James Montgomery

1905 Having previously been makers of sidecars, the company produced a motorcycle. It had a 5hp V-twin engine and a wicker-work sidecar body that could allegedly be detached in two minutes. Connection to the machine was flexible on some models, thus allowing them to bank for corners. One advertisement showed a sidecar fitted to each side of a motorcycle.

For some years they concentrated on their sidecars and listed machines to suit them.

1911 The company moved to Freeth Street, Coventry and remained there for the duration of production. Most machines were either bought in or constructed from bought-in components fitted in the firm's frame.

1913 Late that year the company introduced a motorcycle fitted with a Coventry-Victor 689c flat-twin engine designed by W. A. Weaver of the Coventry-Victor Motor Co that was intended for sidecar use. Transmission was unusual as it was by direct-belt to a three-speed hub, taken from a large pulley mounted on the camshaft. The frame had duplex members around the engine and was fitted with Biflex forks.

1915 The engine size had increased to 708cc but the other features were unchanged.

Post-war. The company changed direction and began to build up a range of models from a 147cc two-stroke to a 996cc V-twin in various forms. They also built a proprietary front-fork that they used on their own big twins. They also sold it to other firms such as Brough Superior and Coventry Eagle. They also began to use ohv engines bought in from Anzani or JAP. Although they were well-made, the machines were always expensive.

1925 Production was disrupted for some time when their works were seriously damaged by fire. They eventually resumed production and kept going into the next decade. Many of their models were named after breeds of dog: Greyhound; Terrier; Retriever; Bulldog. Various engine capacities were available with sv or ohv and the company kept pace with the times.

1940 Following the outbreak of World War II, production came to a stop and did not restart.