1849 Cast iron bridge (foreground) at Castlefield Basin, Manchester. The modern building (YHA) behind the two dark iron columns is on the site of Kenworthy's boatyard 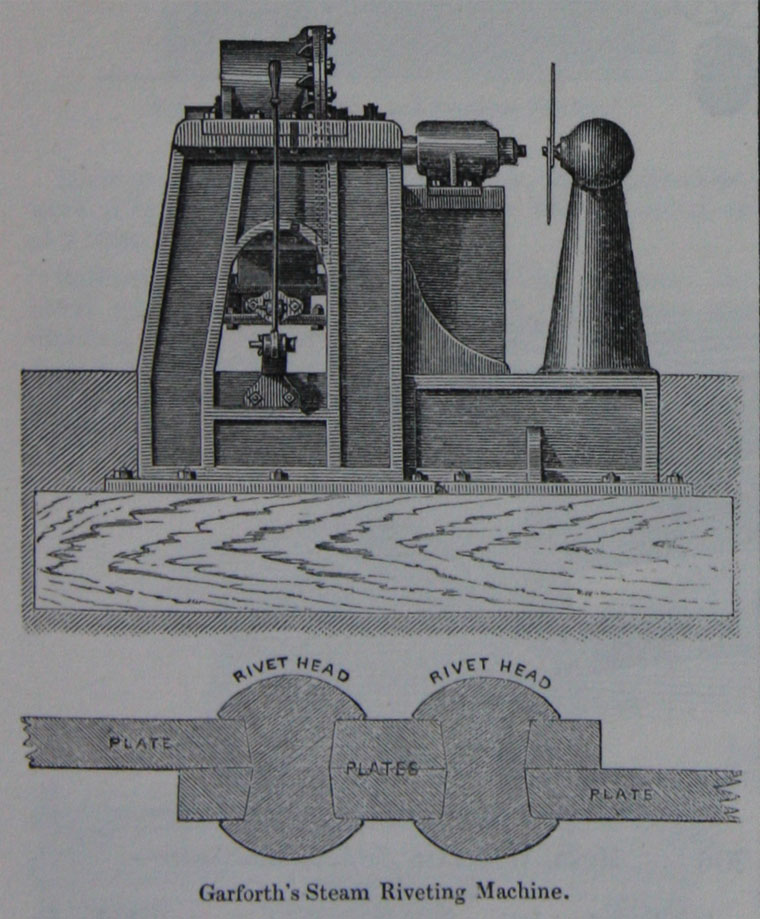 Associated with W. and A. Garforth of Ashton-under-Lyne, Manchester. [1]

The company was in business for twenty-five years

1839 'NOTICE is hereby given, that the PARTNERSHIP subsisting between us the undersigned JOHN GARFORTH. the elder, WILLIAM GARFORTH, JOHN GARFORTH, the younger, and JAMES GARFORTH, in the trades or businesses of iron founders, steam engine boiler makers, millwrights, and machine makers, carried on in Dukinfield, Chester, under the firm of "John Garforth & Sons" was DISSOLVED by mutual consent, on the twenty-seventh day August last. And that all debts due or owing to or by the said partnership, will be received and paid by the said William Garforth, John Garforth, the younger, and James Garforth, by whom the business will in future be carried on —As witness our hands this thirteenth day of December, one thousand eight hundred and thirty nine…..'[2]

1844 Produced iron castings for bridges for the Ashton Branch Railway, including the Dukinfield road bridge.[3]

1849 Newspaper report about the progress of the Manchester, South Junction and Altrincham Railway: '.....On the Altrincham Railway there will eighteen bridges, the principal one being that over the Mersey near Stretford, about seventy feet span, of wrought iron; and a tubular bridge, the principle which Mr. Fairbairn, the eminent engineer, of Manchester, has carried out successfully in many places. There is a cast iron bridge over the Duke’s branch canal, near Mr. Kenworthy's works, of about 105 feet span {see photo}, and there is another of similar character over Egerton-street, Hulme, 52 feet in span. There is likewise a bridge over the canal near to Cornbrook, made of cast iron, and 80 feet span. The four last noticed bridges are from the establishment of Messrs. Garforth, of Dukinfield, ironfounders....'[5]

1849 The Floating of the Britannia Bridge: '.... The total weight of wrought iron in the tube floated on yesterday is 1,600 tons. It has been constructed Messrs. Garforth, of Dukinfield, Manchester, and the others by Mr. C. Mare, of Blackwall.' [6]

Stationary Steam Engines and Boilers made by Garforth

Sale Notice, 1900: 'ALL those Valuable WORKS and PREMISES called the Clayton Dye Works, situate off Clayton-lane, Manchester, in the County of Lancaster (including two boilers and one beam engine, by Garforth, Dukinfield, about 50-h.p., with the rope pulleys used in connection therewith, and the steam piping connecting boilers to engine; one wrought iron boiler tank to receive condense water from engine, one two-inch injector, line shafting in tbe two-storeyed building, one pair of horizontal high-pressure engines, 14½in. cylinder, and one or two lengths of shafting, and one pair of beam engines, by Garforth,....' [9]

1847-48 Sub-contractor to Sharp Brothers and built 8 locomotives for the Sheffield, Ashton-under-Lyne and Manchester Railway.[10]

1850 Sub-contractor to Sharp Brothers and built two locomotives for the South Staffordshire Railway.[11]