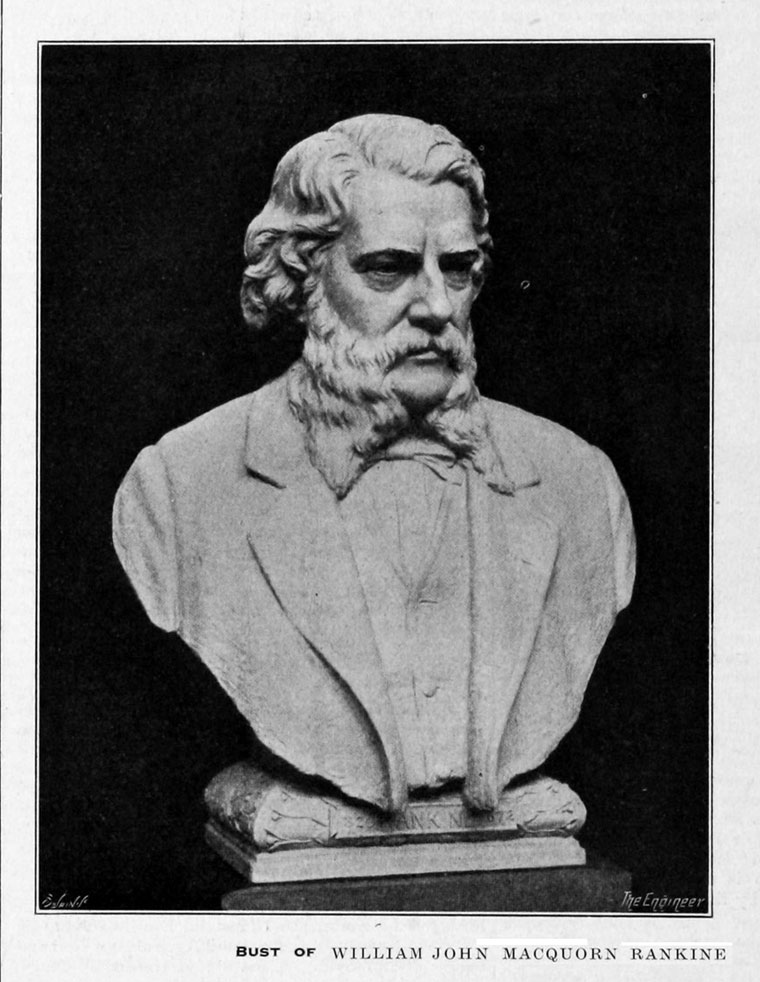 President of the Mechanical Section of The British Association.[1]

1838 Was employed as a Canvas Setter, of which after 3 years found employment else where under Locke and Errington.

1849 Was promoted a member of the Royal Society of Edinburgh.

1850 Produced a theory of the mechanical action of heat.

Early 1850s: Rankine, William Thomson, and Rudolf Clausius proposed the second law of thermodynamics, characterizing the potential efficiency of engines. Rankine's work had two distinguishing features. First, he quickly perceived and elaborated the links between the new science and thermodynamic engines, especially the ubiquitous steam engine, and its serious contemporary rivals like the air engine.

By April 1851 he had constructed a simple rule about the potential efficiency of any heat engine in terms of its upper and lower working temperatures.

Between 1853 and 1857 Rankine collaborated with the Glaswegian shipbuilder James Robert Napier in the development of a marketable hot-air engine, convinced on theoretical grounds that its efficiency would be greater than the maximum attainable by any condensing steam engine but the practical problems proved insurmountable.

Rankine also proposed a complex mechanical model of the unobservable motions which he believed formed heat but others did not accept it.

1853 Rankine became a member of the Royal Society.

1854 Was awarded the Keith medal of the Royal Society of Edinburgh for research in thermodynamics.

1855 Rankine was appointed Regius Professor of Civil Engineering and Mechanics at the University of Glasgow.

1873 "Almost at the moment that a thousand bells rang in the Christmas morn, one of the greatest lights of modern science passed away. Just before midnight on December the 24th, 1872, William John Macquom Rankine died in Glasgow at the early age of 52.[3]

WILLIAM JOHN MACQUORN RANKINE was born in Edinburgh on 5th July 1820, and received his early education partly at Ayr Academy and the High School of Glasgow, attending subsequently several of the scientific classes in Edinburgh University.

In 1839-41 he was a pupil under Sir John Macneill in Ireland, and for several years afterwards was employed on railway and other engineering works in Scotland, chiefly under Messrs. Locke and Errington.

In 1851 he established himself professionally in Glasgow, in partnership with Mr. John Thomson, with whom he revived the project of supplying Glasgow with water from Loch Katrine, and surveyed the proposed route.

In 1855 he was appointed Regius Professor of Civil Engineering and Mechanics in Glasgow University; and in 1857 was elected the first President of the Institution of Engineers in Scotland, in the formation of which he took a very active part. The valuable results of his original and often abstruse investigations in the various branches of the applied sciences formed the substance of a vast number of papers contributed by him to different learned and professional societies and journals; and he also produced an important series of manuals on engineering subjects, for the use both of students and of engineers.

His death took place from heart disease, after a short illness, on 24th December 1872, in the fifty-third year of his age.

He became a Member of the Institution in 1872.