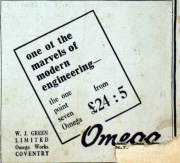 Post-War. The model was soon joined by others but the firm concentrated on a 292cc sv JAP-engined lightweight in three forms of transmission choice.

1921 After a move to larger premises allowed an increase in production, a 545cc sv Blackburne was added.

1922 An all-weather machine was offered, as a 348cc two-stroke with widely splayed duplex tube frame and new spring forks of low un-sprung weight. The engine of that model was also available in a machine with a more conventional outline, as were other lightweights of various engine capacity of sv V-twin JAP engines, and single speed or Sturmey-Archer geared drives.

1923 The only JAP to be continued was the 293cc model, along with the 348cc two-stroke - both in various forms. These were then joined by a 170cc two-stroke miniature with forward-sloping engine in a loop frame and with two speeds.

1924 The range expanded with the addition of Blackburne and Barr and Stroud sports models, plus a Ladies' Model variant of the 170cc miniature.

1925 All except a 248cc Blackburne went forward into that year, and sv and ohv JAP models were added.

1926 The preferred engine had become the JAP, and the 348cc two-stroke and Barr and Stroud models were dropped. A natty little three-wheeler was introduced, with two front and one rear wheel, and was available in either sports or family versions. It was heavily promoted and may well have put a financial strain on the company.

1927 A 677cc sv V-twin was re-introduced. All the JAP-engined singles, the 170cc miniature and the four-strokes ran on. The latter were quite chunky in appearance, in short wheel-base frames with internal expanding-drum brakes. It was the firm's final year, then they totally withdrew from the market.