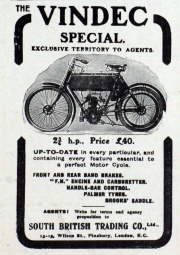 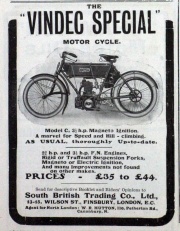 They were made by the German company Vindec to the British style. See Allright. To begin with they were sold by the South British Trading Co of Wilson Street, Finsbury, London, but the company later changed its name and address.

1903-1905 The early machines were typical primitives, fitted with a Belgian 2.75hp FN engine, belt drive and unbraced forks. They had contracting-band barkes on both wheels. The earliest model was soon joined by a 3.5hp single and a 5hp V-twin with a 45-degree Peugeot engine. Front suspension with Truffault leading-link forks was an option for all.

1906 Magneto ignition was fitted as standard, and that year also brought a two-speed rear hub with chain drive from the crankshaft.

1907 After much promotion for competition, a VS was entered in the first TT. Billy Wells came second in the twin class.

1908 Early in the year came more success in a private match race at Brooklands - the first ever two-wheeled event on the track. Oscar Bickford came second on his Vindec Special with its Peugeot V-twin engine.

1909 The range comprised 3.5hp singles and V-twins of 5hp and 7hp. They advertised as the Vindec Motor Cycle Co., of the same address. Later in the year they changed the name to V. S. Cycle and Motor Co., in great Portland Street, London, to avoid confusion with the Vindec name used by Brown Brothers.

1910 The range continued with the use of European engines - the 3.5hp single from Peugeot or FN and the 5hp and 7hp v-twins from FN. They all kept the Truffault front forks, but many of the other fittings were now British.

1912 There were further changes when the agent became Martin Geiger, still in Great Portland Street. The engines became 6hp or 8hp JAP V-twins.

1913 Peugeot engines, in 3.5hp single and 7hp V-twin forms, returned to join the JAP ones.

1914 Business was declining and ceased in that year.