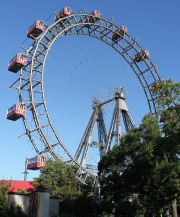 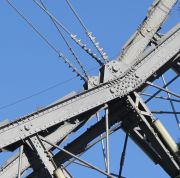 The steelwork contractors were Arrol's Bridge and Roof Co.

The forged steel axle weighs 16.3 tons, and was made by William Beardmore and Co.

The Vienna wheel is a remarkable survivor, and by far the longest-lived of the first generation of giant Ferris wheels, introduced by George Washington Gale Ferris, Jr. in Chicago in 1893.

Small fairground wheels had been in use for centuries. For a short online history, with fascinating photographs, see here[1]. For a thorough account, see 'Ferris Wheels: An Illustrated History'[2]

The construction of the first Ferris wheel was a huge gamble, both technically and financially: in many respects it was a leap into the dark, with huge challenges regarding design and erection, and great uncertainties about the driving arrangements, balance, effect of wind, durability, maintenance, etc., and uncertainties about the commercial viability. Although the Chicago wheel removed many of the uncertainties, the construction (and demolition!) of any large Ferris wheel remained a very bold undertaking. The introduction of any new design feature, for example the first adoption of chain drive and later cable drive, involved great uncertainty, with the threat of serious delays before commercial operation could commence.

The earliest large wheels were no doubt influenced by suspension-type waterwheel technology, but the design of the Vienna-type wheel surely raised eyebrows, because of its use of wire cable for the 'spokes', rather than round bar. This arrangement is entirely rational, as the spokes work only in tension. The concept does not appear to appeal to bicycle makers, though!

A remarkable aspect of the Vienna wheel is its endurance. Its working life has far exceeded that of its contemporaries, none of which lasted much more than 30 years before becoming commercially unviable. Obviously the Vienna wheel has needed extensive refurbishment, but keeping such a complex corrosion-prone steel structure in good order does great credit to the owners.

Basset's first involvement with these wheels was at Earls Court in London, with the Gigantic Wheel and Recreation Towers Co Ltd, who built the (then) largest of the 19th century wheels. It was demolished with great difficulty in 1907. Then came the Blackpool wheel (Blackpool Gigantic Wheel Co. Ltd), which lasted from 1896 to 1928, followed by Vienna (Vienna Gigantic Wheel (Wiener Riesenrad) Ltd), and finally the largest of the Basset wheels, the 100m diameter Paris wheel (la Grande Roue) of the Paris Gigantic Wheel and Varieties Company Ltd, which operated from 1899 to 1920. More information on the Paris wheel here.

A Closer Look at the Vienna Wheel

The rim of the wheel is an immensely rigid structure, the main members being riveted girders. See photo 3. They are separated and joined by radial lattice girders, which extend as posts above the outer rim to provide the pivot points for gondolas. These posts are trussed to the rim by steel tie bars with turnbuckles.

Photo 4 shows a closer view of a radial post, and the drive cable can be clearly seen in contact with the 'horn'.

Photo 5 shows how the spoke cables are connected to the inner rim. The same method of clamping the cables is used at the hub end. This can be seen in photo 6, along with the turnbuckles for adjusting the cable tension. Tuning the cables must be 'interesting'.

A minor problem noted on the Chicago and Earl's Court wheels was the sagging of the spokes when at or near the horizontal position. In fact it was noted that when the wheel rim was partially erected at Earl's Court, the sag of the spokes under their own weight was tending to pull the ends of the partial rim inwards, and that Chicago a vain effort seems to have been made to support the spokes by thin cables. Reference to photo 7 shows thin cables attached to the main cables. Could these be serving to minimise sag, or to limit vibration? Note that one is broken or otherwise disconnected.

Photo 8 hints at the complexity of the hub arrangement, and at the difficulties posed for inspection, maintenance and painting.

Although the wheel rotates slowly, each revolution subjects the spokes, pins, etc to a range of alternating stresses.

Note in photo 8 that the axle is 'trussed' by transvere tie bars connected to the hubs.