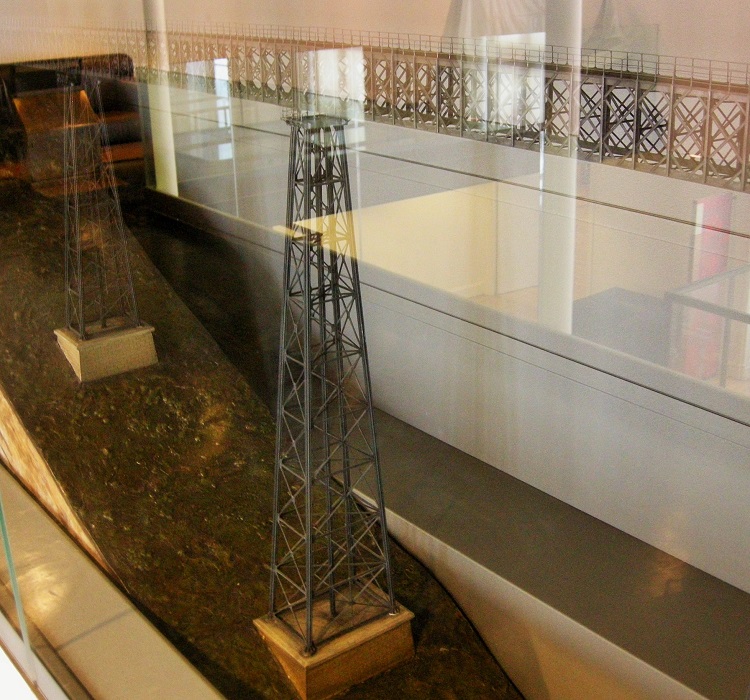 Lastarria designed a remarakable viaduct to cross Chile’s Malleco River. It has been incorrectly attributed to Gustave Eiffel. When inaugurated on 26 October 1890, it was the highest in the world, at 102 metres. Following an international competition in which the Eiffel company also took part, the contract for the viaduct’s metallic structure was won by the Schneider company of Le Creusot. They showed a model at the World’s Columbian Exposition in Chicago in 1893, then at the Universal Exposition in Paris in 1900. The model is now on display at the Musée des arts et métiers in Paris. The 347-metre-long lattice bridge has five spans resting on four metallic piers, the tallest of which is 76 metres high. Still in use, it was reinforced in 1927 to withstand the increasing weight of rail traffic.[1]

VICTORINO AUBELIO LASTARRIA was born at Santiago, the capital of the Republic of Chili, on the 22nd of November, 1843.

After remaining for two years at the University of Santiago, he came to Europe towards the end of 1862, and entered the University of Ghent, Belgium, where he remained until he received its diploma of Civil Engineer in 1867, after which he returned to Chili, and was appointed an assistant engineer on the Southern Railway, and soon afterwards on some public works in the Port of Valparaiso.

At this time, Mr. Henry Meiggs, the wealthy American railway contractor, was engaged in the construction of numerous railroads in Peru ; he sent for Lastarria to assist in the surveys of an important line from Lima to the summit of the Andes at Oroya, and subsequently appointed him engineer for the construction of the section from Lima to San Pedro. Hard work, and the severity of the climate, obliged him to return to Chili in 1870, on sick leave ; but his health being soon restored, he occupied himself in laying out the lines of tramway for the city of Santiago, and then returned in the following year to his work on the Oroya railway, upon which he was engaged, until the end of 1872.

During the three following years, the important reservoirs and irrigation works on the River Rimac were placed under his charge, and the skill with which he executed this difficult work established his reputation as an excellent engineer. He remained for two years longer in Peru, in the employment of the Peruvian Government, and then, in 1877, returned to his own country. The Chilian Government at once secured his services, and he was employed as engineer of the section from Made to Enrico, on the southern trunk line of Chili, which involved the construction of bridges over the rivers Maule, Lontue and Claro. He also prepared the plans of the railway from Taltal to Refresco, which is now to be extended to Cachinal, and acted as commissioner for the Government to determine questions relating to the docks and quays of Talcahuano.

When the war broke out between Chili on the one hand and Peru and Bolivia on the other, he accompanied the Minister of War as consulting engineer, and after the conquest of the Province of Tarapach, from Peru, in 1879, was left in charge of the railways which connect the nitrate of soda lands of Tarapach with the seaports of Iquique and Pisagua, at that time very recently constructed, under the direction, as Chief Engineer, of Mr. H. F. Boss.

For a short time he held the post of Civil Governor of that province, and after remaining there until 1881, conducted the surveys of a railway from thence across the Andes, into the Republic of Bolivia, a service of some danger, for the two Republics were still at war.

In 1882, he was appointed by the Government to survey a railroad from Santiago to Quilpue (near Valparaiso), passing through Melipilla, and in 1883, to survey a parallel line to this from Santiago to Valparaiso, via Placilla and Playa Ancha. After this he was desired by the Government to report on the railway extensions in southern Chili, from Renaico to Victoria, and from Ango1 to Traigeen, of which he was named the chief engineer, and on the failure of the contractors to complete the works, was ordered to take the construction into his own hands, and finish the railways at the cost of the Government. This was a highly responsible and laborious undertaking, involving, amongst other heavy works, in the spurs of the Andes, the construction of a colossal viaduct and bridge over the Malleco, which is 422 yards in length, and crosses the river at a height of 316 feet above the water-level. He completed the whole to the entire satisfaction of the Government. The metal work of this bridge was supplied from the Creusot ironworks, and the representatives of that powerful French establishment were so impressed by Lastarria’s skill and integrity, that they authorized him to submit a tender on his own behalf to the Government for the construction of the remainder of the railway beyond Victoria, to the Port of Valdivia, and as far as Osorno, 550 miles south of Santiago, and near to the frontier of Patagonia. They guaranteed to provide him with all the capital he might require for the work, but before this important negotiation could be completed, his health failed him, and at the early age of forty-four, Victorino Lastarria sank under the excitement and stress of his laborious exertions, and died at Santiago on the 27th of July, 1888. The society for the Promotion of Industry (of Santiago) deputed their president to speak his funeral oration, and in so doing he expressed himself in terms of high commendation, eulogizing Lastarria’s great attainments as an engineer, as well as his indomitable energy and perseverance, his sterling honesty, and other qualities befitting a citizen of honour and repute, lamenting his death as that of one whom his country could ill afford to lose.

Mr. Lastarria was elected a Member of the Institution of Civil Engineers on the 3rd of February, 1885.