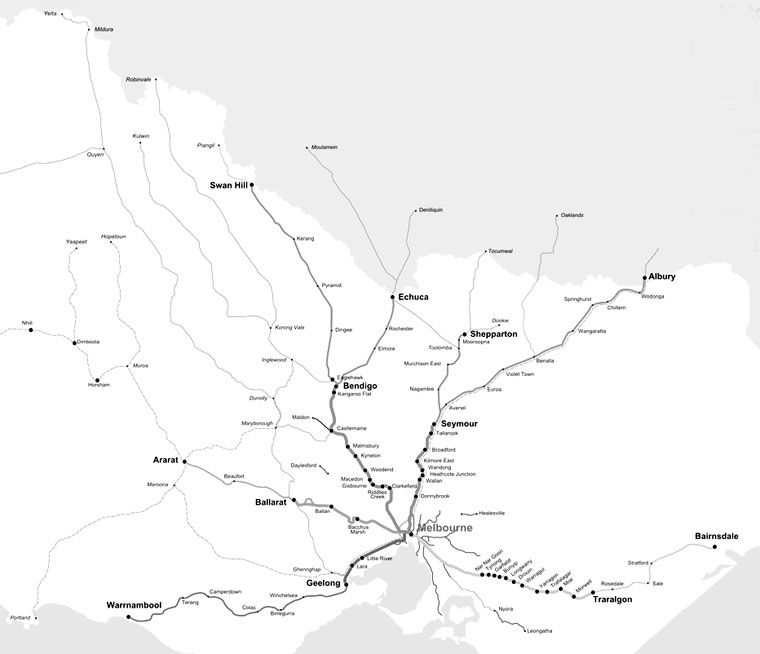 Note: This is a sub-section of Victorian Railways, ie railways of the state of Victoria in Australia.

Victorian lines use 5ft 3in broad gauge, with the exception of a number of standard gauge 4ft 8.5in freight and interstate lines, a few experimental 2ft 6in narrow gauge lines, and various private logging, mining and industrial railways.

1860s Extension to Brighton and Hawthorn

1887 Connection with the broad gauge South Australian Railways at Serviceton.

1884 The State Parliament passed The Railway Construction Act, which authorised fifty-nine new lines to almost every corner of the state, and thus became known as the Octopus Act. The proposed lines would serve both new agricultural communities and support suburban land speculation. It was also this decade that the first narrow gauge line was opened from Wangaratta to Whitfield, with three other lines following by 1910.

The South Gippsland line was also opened from Dandenong to Leongatha by 1891.

By the late 1890s the majority of the state was now covered in railways, with the exception of the Mallee country in the north west of the state which saw further line openings, such as the Mildura line in 1903