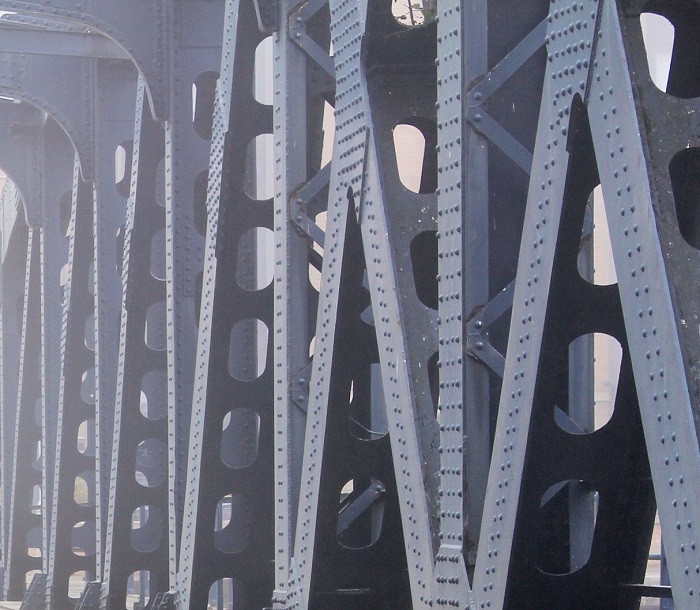 In Leith Harbour and Docks.

Constructed between 1871 and 1874, but surprisingly modern-looking.

A detailed description of the bridge was given in 'Engineering' in 1874.[1], from which the following information is taken:

Overall length of wrought iron girders is 214 ft, clear span 120 ft. Gross weight 620 tons, including 60 tons of timber and 240 tons of kentledge counterweight. Hydraulically operated. The cost was about £30,000.

The arrangements for swinging the bridge are interesting. There are no live rollers, and instead, the whole bridge is raised hydraulically by a single piston 66.5" diameter in a cylinder approx. 6" thick. Hydraulic (water) pressure 700 psi. The cylinder is seated on a block of granite 7 ft square and 3 ft thick. The top of the ram is machined convex, with a spherical radius of 32". This mates with a corresponding concave surface in a 7 ft square iron casting on the underside of the bridge. The surfaces are well lubricated, and allow for pitching motion when the bridge is raised bodily. It lifts 3" at the centre (at the pivot?) and 7" at the fore end, while the tail end bears lightly on a pair of 30" diameter rollers running on a tram track, to provide stability. Slewing is effected by a pair of hydraulic rams 14" diameter and 10 ft 6" stroke. These act on slewing chains passing round a 25 ft diameter ring. The bridge could be slewed either upstream or downstream, as required. The friction was so low that the bridge could be moved by one man pushing on the fore end. Provision was made, in the form of a hand pump, two 20 ton rams, and a capstan, to cater for the event of problems with the main hydraulic supply or with the ram.