1. Bridge in February 2015, shortly after completion of restoration 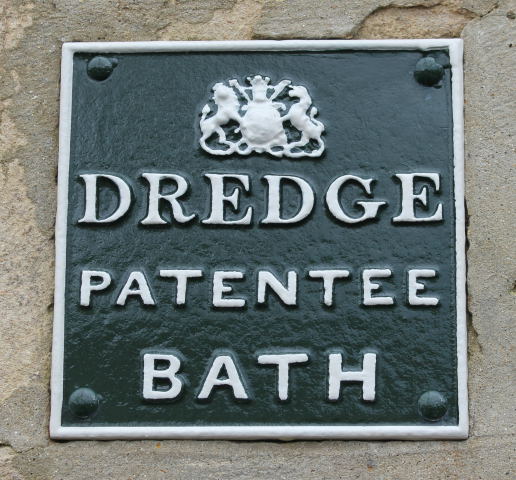 4. 2012, before restoration, with temporary supports in place, and evidence of previous repairs

5. 2012, before restoration. The beam running left to right is a longitudinal beam, probably original (wrought iron lengths joined by fishplates). This supports transverse I-beams (not original). Between the I-beams are longitudinal wooden members (not original). Above the I-beams are lengths of wood supporting the wooden deck. This, and the previous photo, also shows the wrought iron trusses and brackets beneath the deck (probably original) 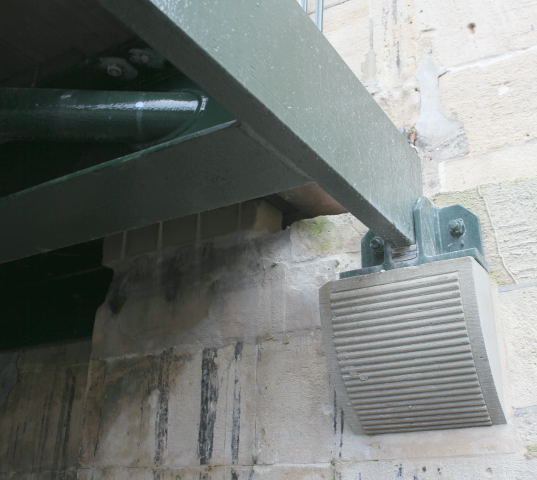 10. c.1922 photo which was displayed on an interpretation board near the bridge in 2012. Victoria Works of Stothert and Pitt in background

11. The bridge can be seen at the bottom LH corner of this 1925 photo of a 50-ton Stothert and Pitt crane for export to Cape Town. Apartments are now being built on the site.

Constructed in 1836, this is the oldest of James Dredge's patent bridges.

It crosses the River Avon in Bath, and has recently undergone expensive restoration to allow its continued use as a footbridge.

Although resembling a suspension bridge, and called such by James Dredge, having chains suspended from the towers, authoritative sources describe it as a 'double cantilever' bridge. Unlike a suspension bridge, in which the deck is suspended by more or less vertical rods, here we have tie rods which come off the chain (or the towers) at prescribed angles. This induces some compression in the deck, in contrast with a suspension bridge, whose deck is freely suspended from the chains, with no end support from the towers. In theory, if the bridge were to be cut through the middle, we would have two decks cantilevered from the towers. In practice, the distribution of loads in the various members is complex, and 'tuning' the stays in an effort to share the load must have been a frustrating business.

An interesting analysis of the bridge was reported in 2009 [1]

One of Dredge's aims was to economise on the use of wrought iron. He described his chains as 'tapered', being wider at the towers and narrower at mid span. In practice this was achieved simply by reducing the number of chain links from the tower to the mid span.

Extensive and expensive restoration was recently completed, and the bridge reopened in January 2015. It was necessary to upgrade the bridge to modern safety standards, raising concerns that its historical value might be diminished. Fortunately the end result is highly satisfactory, and in fact the appearance has been improved by the elimination of repair work carried out in the past, which included visible weld repairs. The outermost deck beams had at some point been replaced by steel channel sections. Now, lengths of bar have been substituted, apparently joined by riveted fishplates, presumably reflecting the original design. It appears that the flat wrought iron tie bars (connecting the deck with the chains), whose ends had been forged down to circular section, have now been replaced by steel bars with, apparently, round bars welded on the end and threaded.

It appears that the deck has been very considerably strengthened, by cleverly and discretely fitting new transverse I-beams welded to new longitudinal I-beams (these replacing the previous wooden packers and retaining the original wrought iron beams, while doing the work of the original items). See 2012 and 2015 photos of underside (Photos 5 & 6). Originally the ends of the longitudinal load-bearing wrought iron beams were supported on corbels projecting from the masonry piers. These are retained, but the ends of the new beams are bolted to a transverse beam, which in turn is bolted to the pier. See Photo 7, which also shows the addition of diagonal bracing.

A very impressive piece of work.

'Mr. James Dredge. —The death of this gentleman, long known as the inventor of the suspension bridge system, which bears his name, recently occurred at his residence, Gothic Cottage, Sion Hill, Bath, after long illness. Mr. Dredge has left in his bridges a proved theory of great public good whenever the public shall be wise enough to avail themselves of it. It is the least costly and the strongest of all bridges built on the suspension principle. That over the Avon in this city has suffered all kinds of traffic, and the tramp of the Militia, for upwards we believe, of a quarter of century, and its capability and durability are placed beyond doubt. It is Macadamised like a public road, with equal depth and weight, and any one who can appreciate the comparative strength and stress of iron in the horizontal and vertical directions, will see how so aerial structure should so greatly exceed in power of resistance the clumsy and costly ones generally adopted, whose central weights, instead of giving strength, tend only to their destruction. Mr. Dredge leaves behind him a name that will be honoured by future generations; such will be the reward of his life of unrewarded labour. He has contended in vain against intrests and prejudices, but the sound mathematical principles of his bridge, and its adaptation for cheap structures for every variety of purpose, from that of crossing a rivulet to the magnificent spans of broad streams cannot fail, ultimately, to gain for his invention an ascendancy over all others. Mr. Dredge will leave behind him enduring remembrances of his perseverance, patient endurance, inflexible integrity, and social virtues.'[2]