Grace's Guide is the leading source of historical information on industry and manufacturing in Britain. This web publication contains 149,655 pages of information and 235,472 images on early companies, their products and the people who designed and built them. 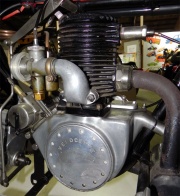 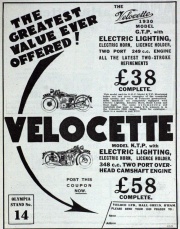 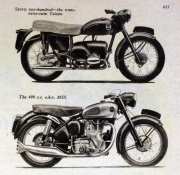 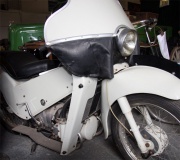 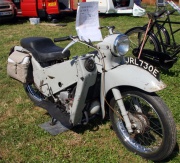 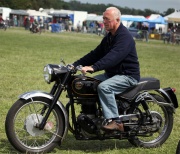 The Veloce firm was run by the Goodman family. During the nineteenth century John Gutgemann had arrived from Germany, married and raised a family in Birmingham as a cycle manufacturer. He also used the name of John Taylor for a while, in partnership with William Henry Gue, as Taylor, Gue, before eventually changing the family name to Goodman.

As Taylor Gue, they made frames for Ormonde Motor Co, took that business over late in 1904, and that enabled them to produce their own machine the following year.

1905 Trading as Taylor Gue, the company produced its first motorcycle. Called the Veloce, it had a 2hp engine and belt drive, but it was not a success and was discontinued.

c.1910 John's second son, Eugene F. Gutgemann, joined the firm; the 2 brothers worked on the next model. It was quite advanced and had a 2.5hp engine with overhead inlet- and side exhaust-valves, mechanical lubrication and a two-speed gearbox. As well as this sophisticated model there was a conventional 3.5hp machine.

1913 A machine with an enlarged engine was entered in the TT, without success. During this year the company changed tack to produce the first of their very successful two-strokes. As these models were lightweight, the name was change from Veloce to Velocette - a name that was to remain famous in the history of motorcycles.

1914 More models were produced, including a ladies' version, but the arrival of World War I brought manufacture to a close.

1916 An Extraordinary General Meeting of the members of the New Veloce Motors Limited, held at Veloce Works, Fleetstreet, Birmingham, decided to effect an amalgamation with Veloce Limited. The company was then wound up. John Taylor was chairman[1]

1919 The model reappeared, almost unchanged except for the addition of a drum rear-brake. Other models arrived, with new frames.

1921 New Veloce Motors Ltd was removed from the register of public companies[2]. Presumably the company continued as Veloce Ltd.

1921 The machines now had three speeds, but none had a clutch.

1922 The famous Velcoette clutch arrived. The design was ingenious as it fitted in a small space between the drives to avoid altering the layout and positioning of the engine or gearbox. How it was devised remained an enigma for the whole of the company's lifetime. Throughout the following years, variations of a model with a larger engine were produced.

1924 Following on from an advanced but unreliable two-stroke that was originally designed for the TT, the company developed a powerful four-stroke with overhead-cams. This classic design was the model K and would become the blueprint for future models. It had a 348cc engine with the camshaft driven by shaft and bevels, and a narrow crankcase. This arrangement would remain a design feature for the Velocette single.

1925 Having unsuccessfully entered the Junior TT, the company developed an engine - using a stroboscope. This enabled them to study it operating at high speed, but in slow motion. This clever move enabled them to identify the problems and put them right.

1926 With their engine troubles behind them, Alec Bennett entered the TT and won by over ten minutes.

1927 The success at the TT the previous year brought such a demand for Velocette motorcycles that the firm moved to Hall Green, Birmingham, where they had bigger premises. The model U had taken over from all the rest and was the only one in production. Sports and economy versions of this model were also available. The success of the older model K had inspired the arrival of the sports KSS - this had narrow mudgards, a larger fuel tank and a tuned engine. Following on from this came the KS - this combined the KSS style with the cheaper K engine.

1928 Druid forks had previously been used and these were now replaced by Webb forks. The first machines produced were under the Veloce label, but due to popular demand it quickly changed to Velocette. Alec Bennett won again at the TT. During that year Harold Willis designed a positive-stop, foot-change gear mechanism. This had a big impact in the racing world as it saved time and was also very safe, as the riders' hands remained on the handlebars.

1929 Freddie Hicks had a win at the TT and this took their success record to three wins in four years.

1930 The new decade brought new designs. One in particular, the KTP, had coil ignition and twin exhausts, but it was not very popular.

1933 A new design was introduced. This was the MOV with ohv and intended as a gap filler between models. This classic design was so successful that the company continued to produce it throughout its existence.

1938-1939 During the previous few years, progressive KTT development had led to the production of Mk numbers. In both years the Junior TT was won by Stanley Woods. During 1939 two new and innovative models appeared. Both were twins (one for road and the other for racing), both had the crankshaft set along the frame and both had a four-speed gearbox. The racing twin was never raced. The road model never progressed beyond prototype but the suspension design was used after the war.

WWII The company made models for the French and for the RAF - less exotic but still different road machines.

1947-1949 The firm returned to making both racing and road models, including the LE. This was most notable as being clean and easy to ride as it was small, smooth and very quiet. It was aimed at the mass market. It didn't quite make the impact intended and proved to be unsuccessful and costly. While advanced, it was sedate and economical - and unpopular, but it was the arrival of the scooterette that did achieve that success. As for the scooter, it was never really able to compete with its neat and nifty Italian counterpart. Despite its flaccid sales, the LE remained in production from 1949 until 1970. Success came at the TT in all three of those years. Freddie Frith won all five races to take the world title.

1951-1953 Engine changes were made to the LE and the MAC and rear suspension was introduced.

1955 A Scrambler appeared, with a tuned engine.

1956 The Endurance was produced for the American market. Velocette also announced the arrival of two sports models the Viper and the Venom - high-performance machines, fast and powerful.

1957 The kick-start Valiant arrived. This was a sports model based on the amended LE. Although it was advanced it was cumbersome and expensive, and not very popular as there were cheaper and better performing models.

1958 The LE adopted four-speeds, foot change and kick-start. It sold well to many police forces as it was quick and quiet.

1960s The two sports models (Viper and Venom) were produced in many variations and with many different names.

1961 The last of the true new models was produced. Known as the Viceroy scooter, it was scorned by Velocette enthusiasts and a big mistake. The machine was huge and unwieldy, and as it arrived when the market was dwindling, it was not a success.

1964 The Vogue went into production. It was a great improvement, had a glass-fibre body, twin headlights and many other refinements, but it didn't do well.

1965 Enthusiasts were pleased to see the arrival of the Thruxton - a souped-up Venom, which was their most powerful machine and one of the best contemporary singles. It was a speedy, high performance sports machine with clean lines.

1966-1968 The market was shrinking and times were hard. The company lost money on the Viceroy and Vogue.

1969 Things picked up a little as Floyd Clymer arranged for the Indian Velocette to be built by Italjet.

1970 Floyd Clymer died and his project and ideas went with him. By the end of that year the firm was in serious trouble.

1971 The company went into liquidation, but the Goodman family settled all outstanding debts.

Post 1971 Spares were still available as the rights to the name had passed to Matt Holder and then on to his son David Holder. Permission was eventually given by one of the Goodman relatives for David Holder to use the Velocette name on a complete machine.

1998 A Classic Bike show in Stafford exhibited a road model with a revised Thruxton engine. There were also plans for a street-scrambler.