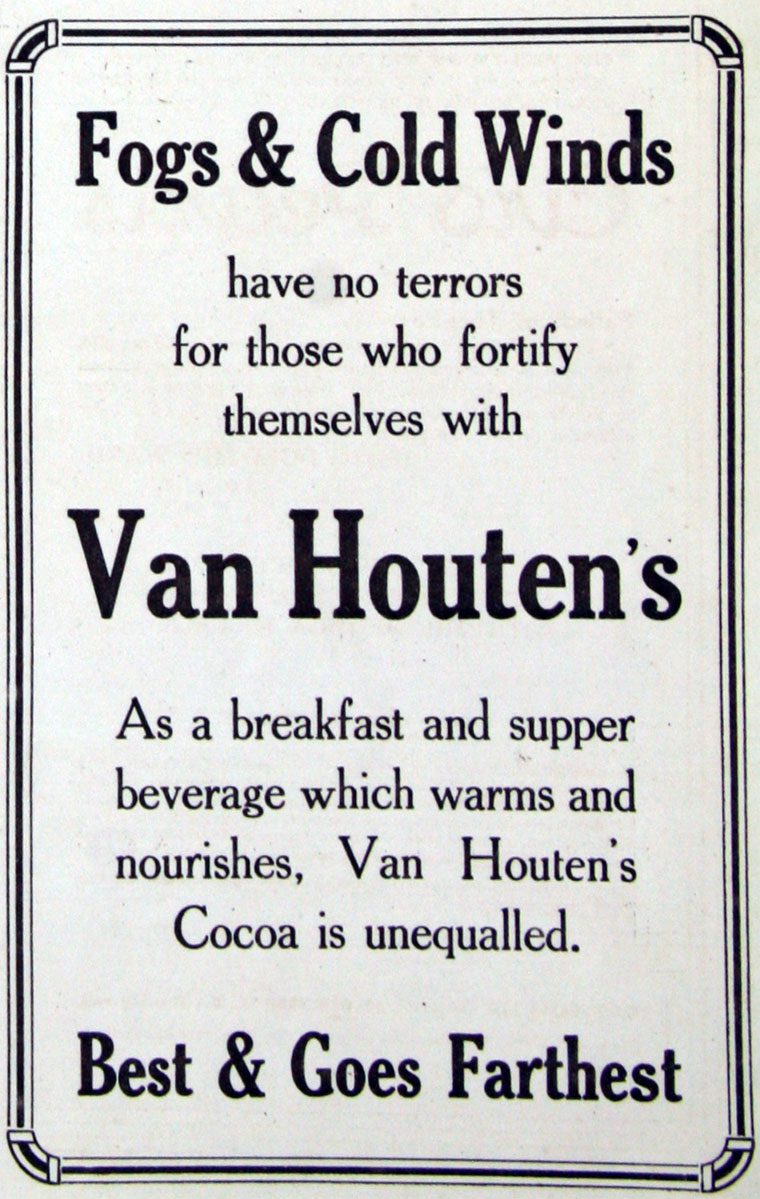 1815 Casparus van Houten (1770-1858) opened a chocolate factory in Amsterdam, with a mill turned by labourers. At that time, cocoa beans were ground into a fine mass, which could then be mixed with milk to create a chocolate drink or, with addition of sugar, cinnamon and vanilla, made into cookies. However, the high fat content made the chocolate very hard to digest.

1828 Casparus van Houten Senior (and not his son, who is usually credited) patented an inexpensive method for pressing the fat from roasted cacao beans. The centre of the bean, known as the "nib," contains an average of 54 percent cocoa butter, which is a natural fat. Van Houten's machine - a hydraulic press - reduced the cocoa butter content by nearly half. This created a "cake" that could be pulverized into cocoa powder, which was to become the basis of all chocolate products.

The introduction of cocoa powder not only made creating chocolate drinks much easier, but also made it possible to combine chocolate with sugar and then remix it with cocoa butter to create a solid, already closely resembling today's eating chocolate.

1850 Van Houten moved his production from a windmill in Leiden to a steam factory in Weesp. By that time he was exporting chocolate to Britain, France, and Germany.

1865 Coenraad’s son Casparus (c.1844-1901) joined the company. It turned out that he had a gift for marketing and contributed greatly to the growth of the company. Advertisements for Van Houten came to be found on trams throughout Europe and the United States.

1866 John Cadbury travelled to Weesp to buy a Van Houten press, but didn't use it in his manufacturing until 1875.

1879 Rodolphe Lindt made chocolate more blendable by the process of conching.

Van Houten introduced a further improvement by treating the powder with alkaline salts (potassium or sodium carbonates) so that the powder would mix more easily with water. Today, this process is known as "Dutching". The final product, Dutch chocolate, has a dark color and a mild taste.

As early as 1899 Van Houten produced a commercial film that depicted a sleepy clerk who recovers miraculously after eating some chocolate. The factory was a boost for the town of Weesp, whose population doubled in the second half of the 19th century. Casparus Jr. had himself built a 99-room Jugendstil villa in Weesp. Work was started in 1897 but was not completed until 1901, the year he died.

1962 The Van Houten company of the Netherlands and the associated but independent British company of similar name was sold to W. R. Grace.[1]

1971 The factories in Weesp closed.

The Van Houten brand name, still in use, has been transferred several times since, most recently in 1990 from the German chocolate manufacturer Jacobs Suchard to Philip Morris.

2008 The Van Houten GmbH company still own the trademarks for Van Houten Heaven.