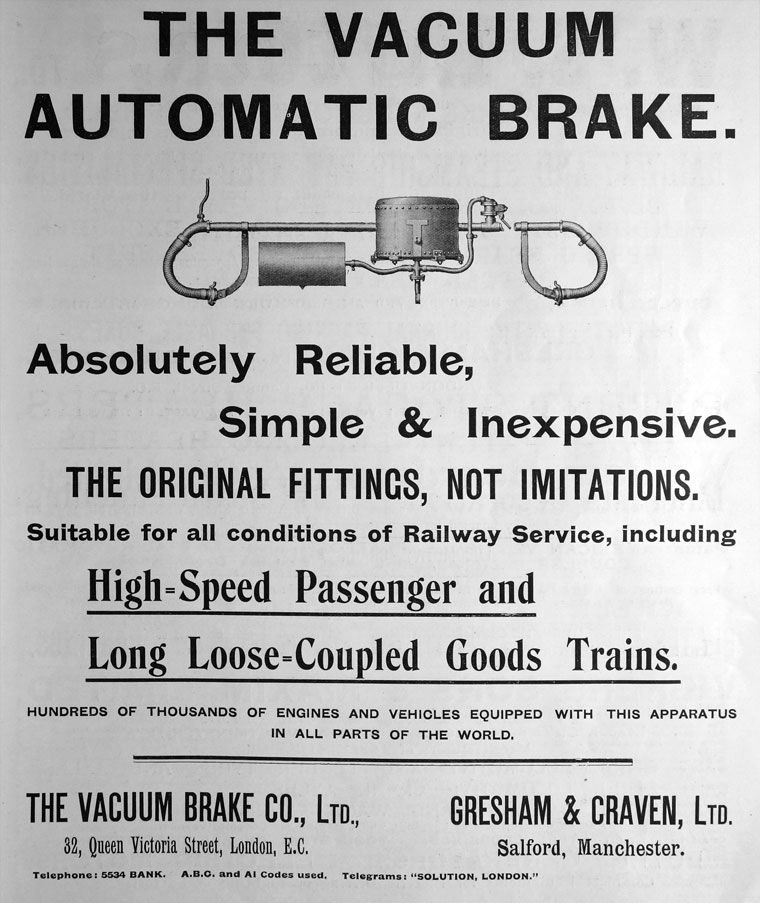 c.1870 John Y. Smith, an Englishman who had been working in Pittsburgh for several years, developed a vacuum brake which also attracted attention in Britain[1]

1875 George Westinghouse's company purchased the rights to the patents of the company for USA and Canada so that both vacuum and air braking systems could be offered; Smith's vacuum brake had been in use in USA since 1872 where it was in use on 10 lines[2]

1875 Tests of the various braking systems were conducted on the Midland Railway using a specially equipped train under the supervision of Mr Edward Woods CE; the various brakes were supported by different railway companies[3]. Westinhouse's air brake was judged most efficient.

1876 North British Railway organised a series of trials between Westinghouse's automatic air-brake and Smith's vacuum brake supplied by the Vacuum Co [4] which demonstrated the advantages of the air-brake. Nevertheless the vacuum system was deployed by many British railway companies.

1878 The Vacuum Brake Co was voluntarily wound up[5]

1878 John George Hardy was appointed continental manager of the company

1931 The Vacuum Brake Company, Ltd., of London, in conjunction with its associated concerns of Gresham and Craven, Ltd of Manchester, and the Heatly-Gresham Engineering Company, Ltd., of Letchworth, exhibited a full range of vacuum brake equipment for all kinds of railway locomotives and railcars, and rolling stock in the Buenos Aires exhibition.

1952-54 Was quoted on the London Stock Exchange

1961 Manufacturers and appliers of mechanical appliances to locomotives, wagons, trucks and carriages. [13]

1967 Birfield was acquired by GKN