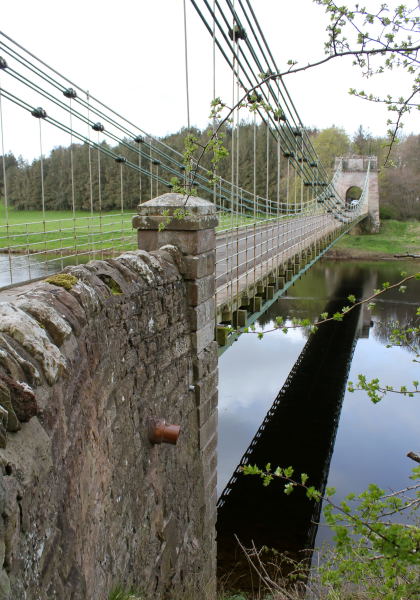 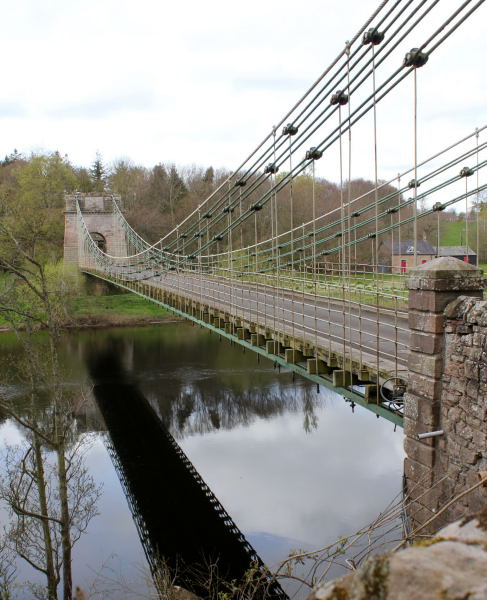 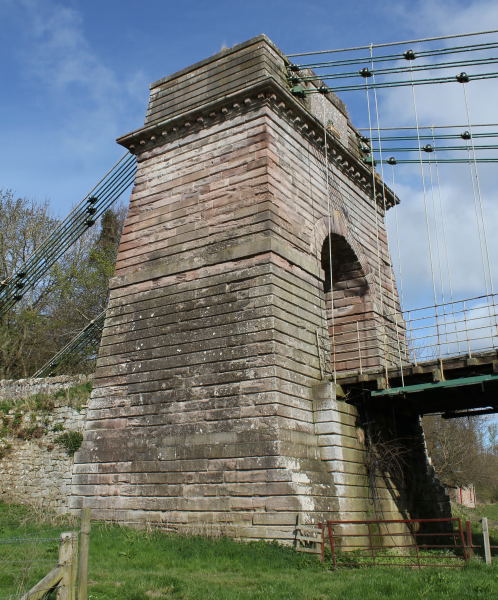 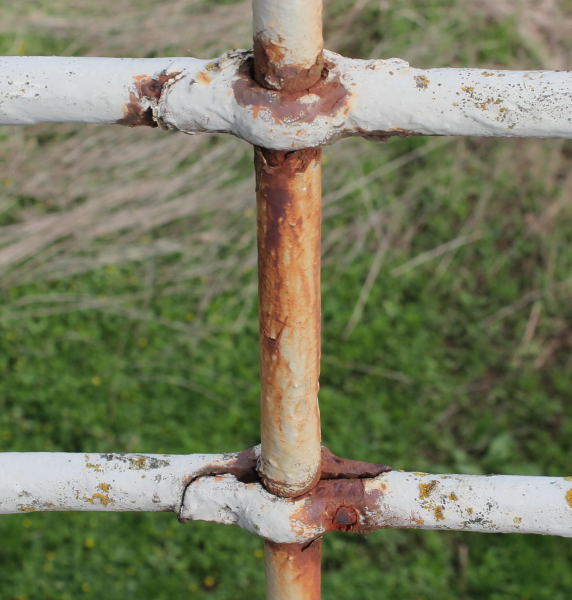 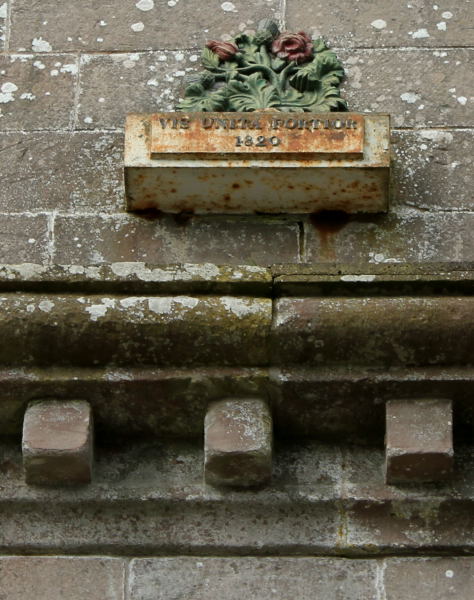 at Paxton, near Berwick-upon-Tweed

Designed by a Royal Navy officer, Captain Samuel Brown. Brown's first design for the bridge was prepared in 1817, and reviewed by the eminent civil engineer John Rennie (the elder)

1820 'The Chain Bridge lately opened at Berwick, was made at the Patent Iron Cable Works at Newbridge, near Cardiff, of which Captain Brown is the chief proprietor, and the bridge is of his invention.'[1]

This bridge spans the border between England and Scotland, joining the villages of Horncliffe and Paxton. It is thought to be the oldest suspension bridge in the world still in use by vehicles. The builder was Captain Samuel Brown. After a career as a distinguished naval architect, where as part of his work he designed blocks and rigging for ships, he set up business as a chain manufacturer. His first foundry was in Millwall, London, but later he owned a manufactory in Wales.

He patented his wrought iron bar chain links in 1816. This design of linking produced great strength, but the roadway was very flexible; even one person walking across it today can detect the movement.

Prior to the building of this bridge this was a long established river crossing, however it was dangerous in winter and when the level of the river Tweed was high. The North Durham Turnpike Trust commissioned the bridge in 1819 and it opened one year later at a cost of £7000 on the 26th July 1820.

The distance between the towers is 437 feet and the bridge decking is 360 feet long. The towers at the English end are built into a cliff face whilst they a free standing structures at the Scottish side. It was a toll bridge until 1955 with a Keepers cottage at the English end of the bridge.

As vehicular traffic weight increased there were concerns regarding the strength and safety of the structure (I suspect that it was more about the movement under load than the weight). In 1902 two additional cables were installed, these were twisted steel ropes running over the top of the existing structure, anchored at each end with additional vertical hangers, this took some of the movement out.

The bridge never made Brown famous although both Stevenson, both Brunels, father and son visited the bridge. His greatest accreditation was the first pleasure pier in Britain, built at Brighton on exactly the same principle as the Union Bridge. This was completed in 1823.

He also designed the ironwork for the Hammersmith Bridge in London. During this period Thomas Telford had won the contract for the Menai Bridge and Brown worked alongside him on the design of the structure.

In 1826 he designed and built the Welney suspension bridge on the Ely to Wisbech road. This served until 1926 when it was replaced with a more substantial structure.

Finally, many believe that the bridge over the Thames at Marlow was built by Brunel, due to the similarity with the Clifton Bridge at Bristol. It was actually designed and built by William Tierney Clark, and guess who designed the chains and structure, no other than Captain Samuel Brown RN.

Some Details of Construction

Photo 5 shows three pairs of original chain links, and the 20th century wire cable. The cable would only come into play in the event of chain failure or excessive loading - its hangers normally carry no load at all, remaining untensioned when a vehicle passes over the bridge. The attachment of hangers to the cables can be seen in Photo 7, while the lower end of one of the 'new' hangers (suspenders) can be seen in the centre of Photo 9. Photo 6 shows the tower on the Scottish side.

Photo 10 shows a cast iron 'shoe', no longer used, but presumably provided to support the original deck. Today there is no support for deck other than that provided by the hangers. This is very apparent when standing close to the end of the deck when a vehicle reaches terra firma at either end of the deck.

On suspension bridges, stiff parapets make a valuable contribution to the deck's stiffness. However, in this case, while the parapets add greatly to pedestrian safety, they contribute very little to deck stiffness. In fact they do not run full length, the fencing role being taken over by the chains towards mid span. The intereaction between the railings and the hangers, and between the vertical and horizontal members of the railings is surprisingly complicated, and would have kept the blacksmiths occupied for many hours. See photos 11 & 12. The hangers pass through bosses in the horizontal rails, causing some fretting when relative movement occurs.

Photos 13-15 show how the chain links are joined together, and how they support the hangers. Photo 16 shows a modern means of supporting a hanger. This allows us to see the pairs of short links either side of the eyes of the chains. Although adjacent chains are not cross-connected by their linking pins, they do share the duty of supporting the hanger blocks.

Photo 17 shows saddle clamps with additional bars passing into the anchorages in the rock face on the English side.

It is interesting to compare the details with one of Samuel Brown's later bridges, Kalemouth Suspension Bridge, south of Kelso, built c.1835. It is of half the span, has only two pairs of chains, and has many detail differences, including different means of connecting the hangers to the chains.