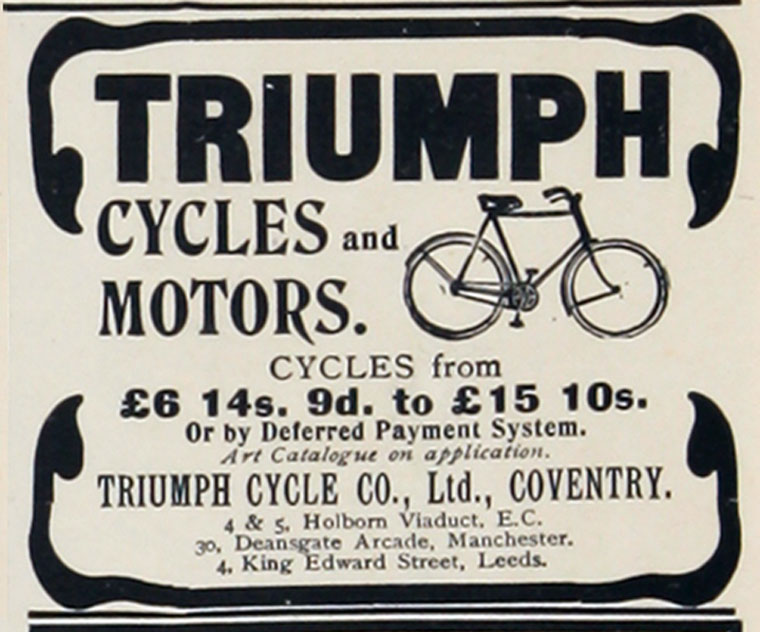 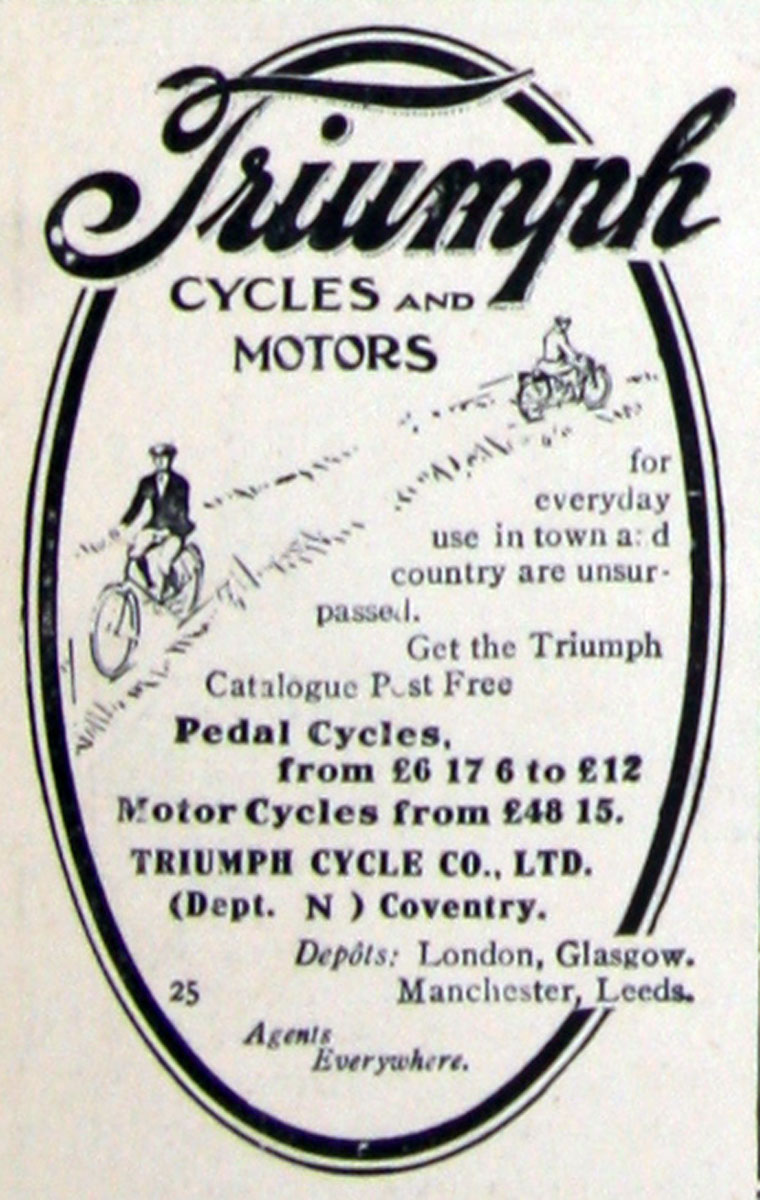 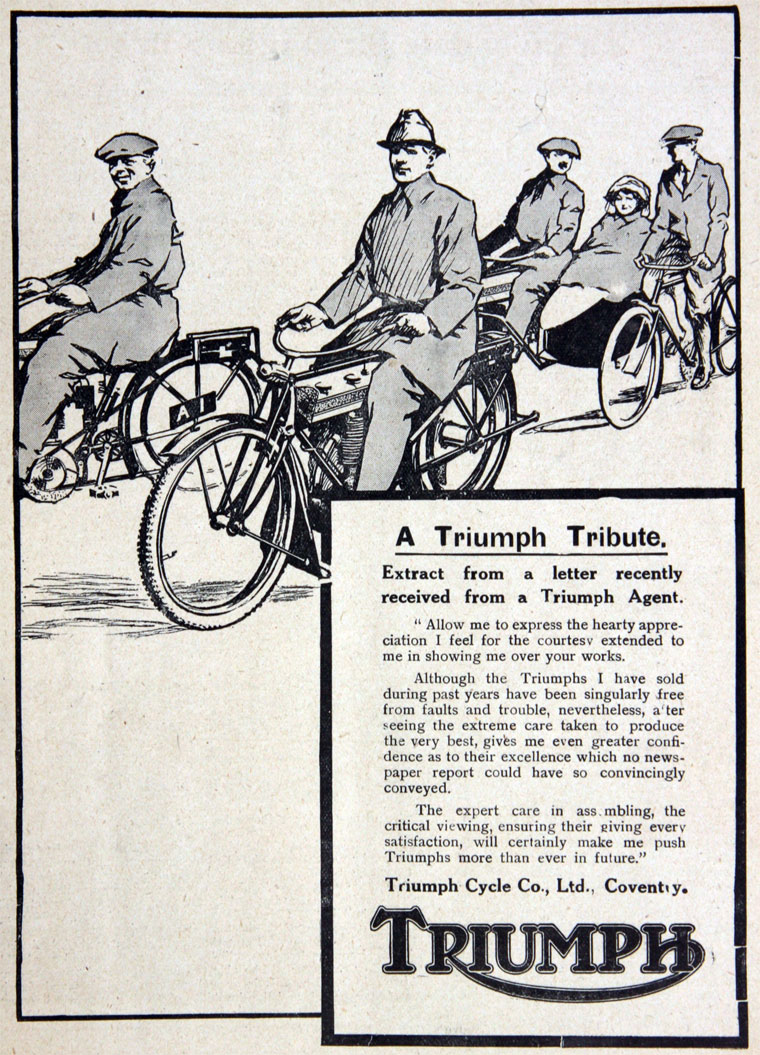 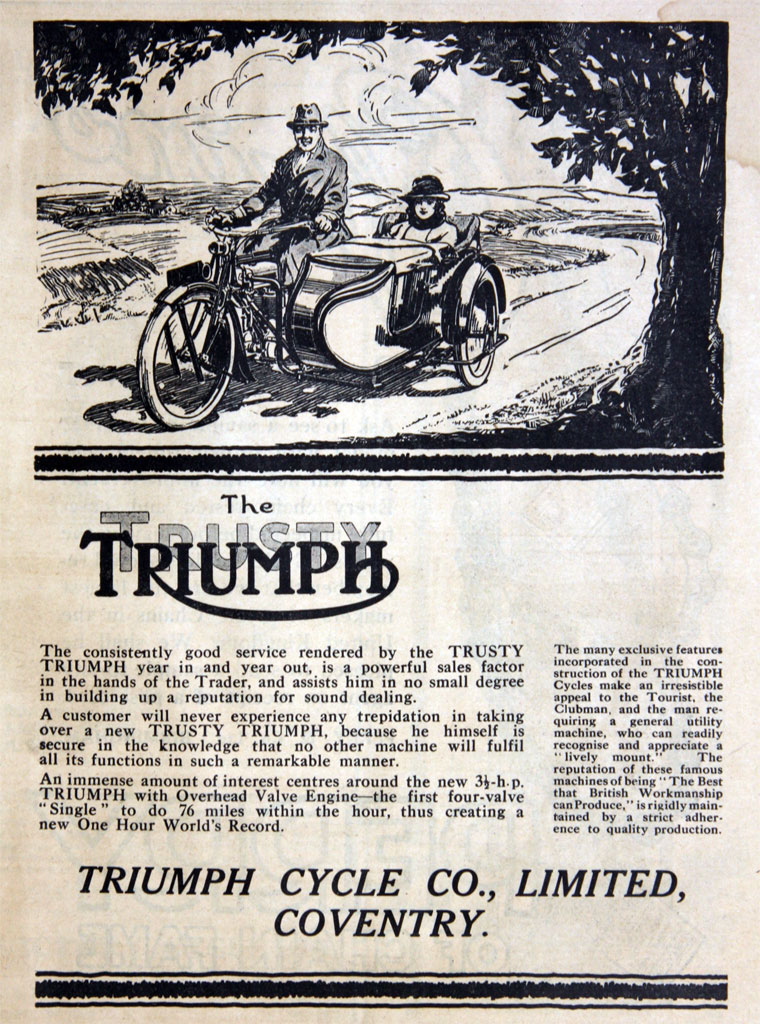 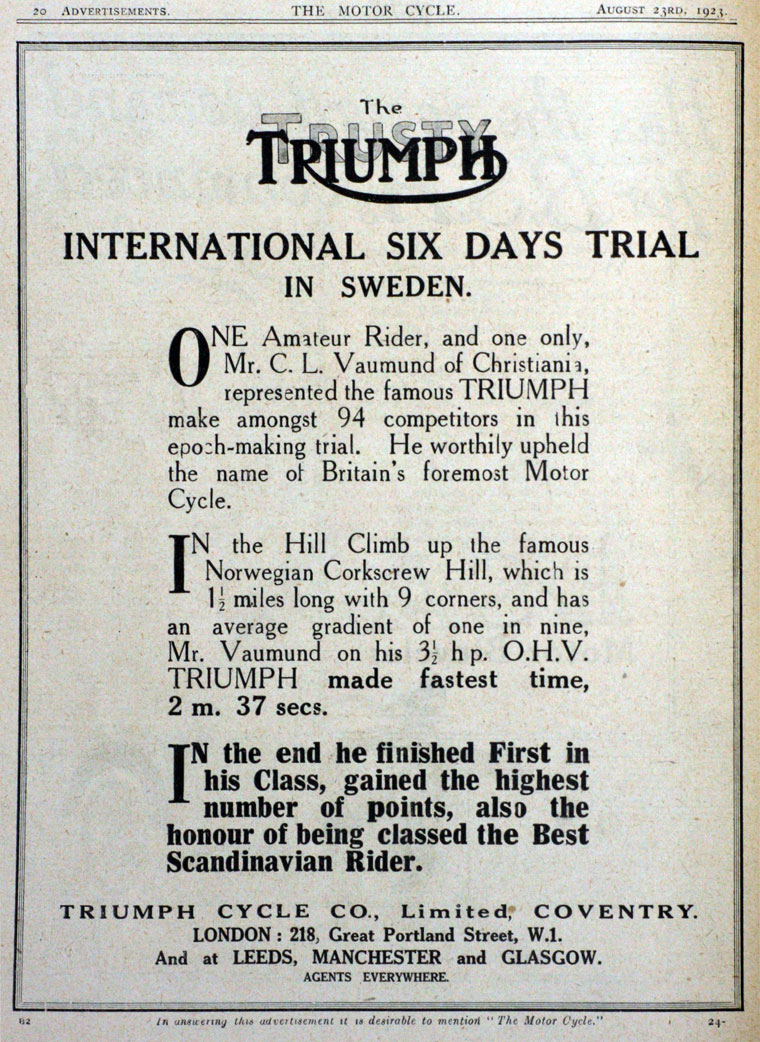 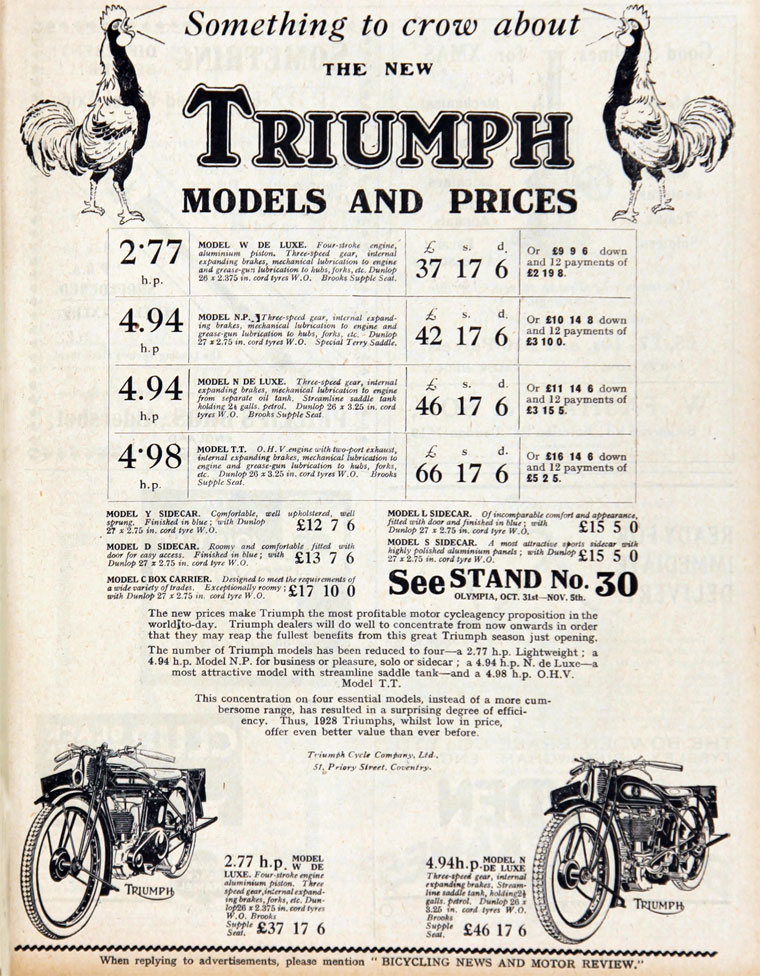 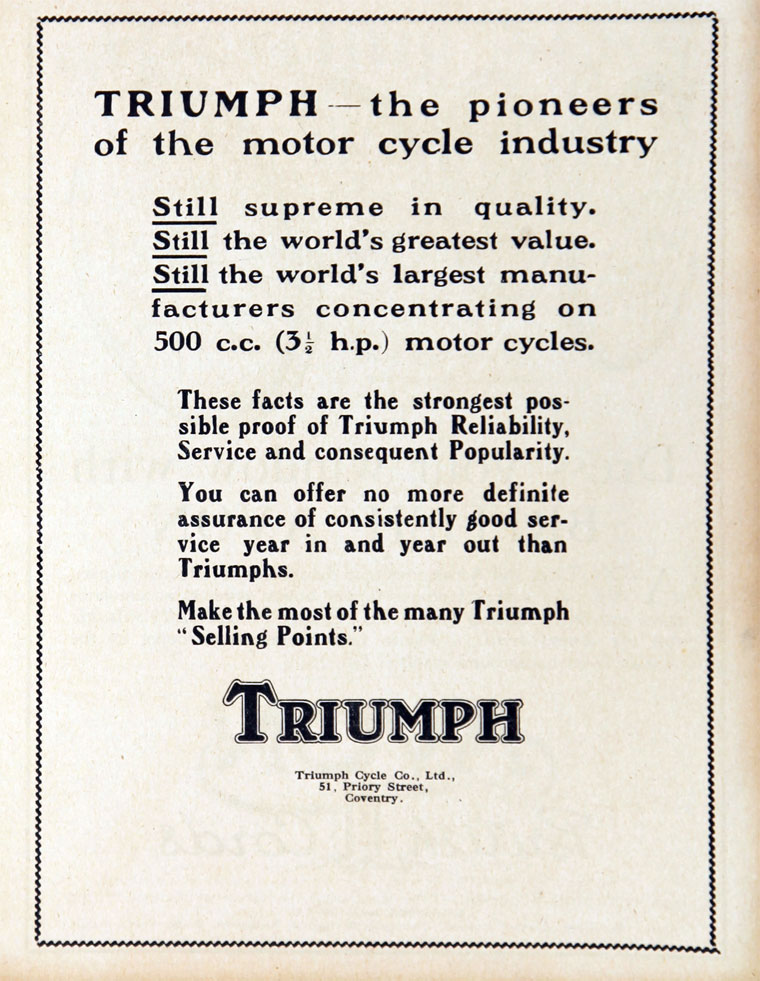 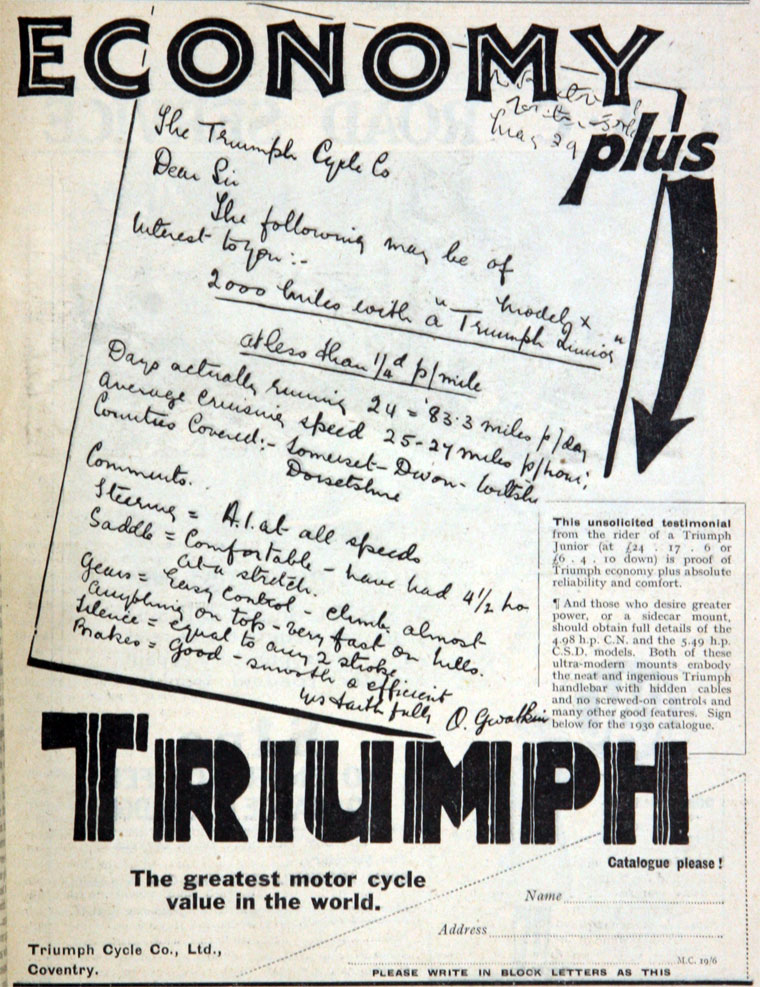 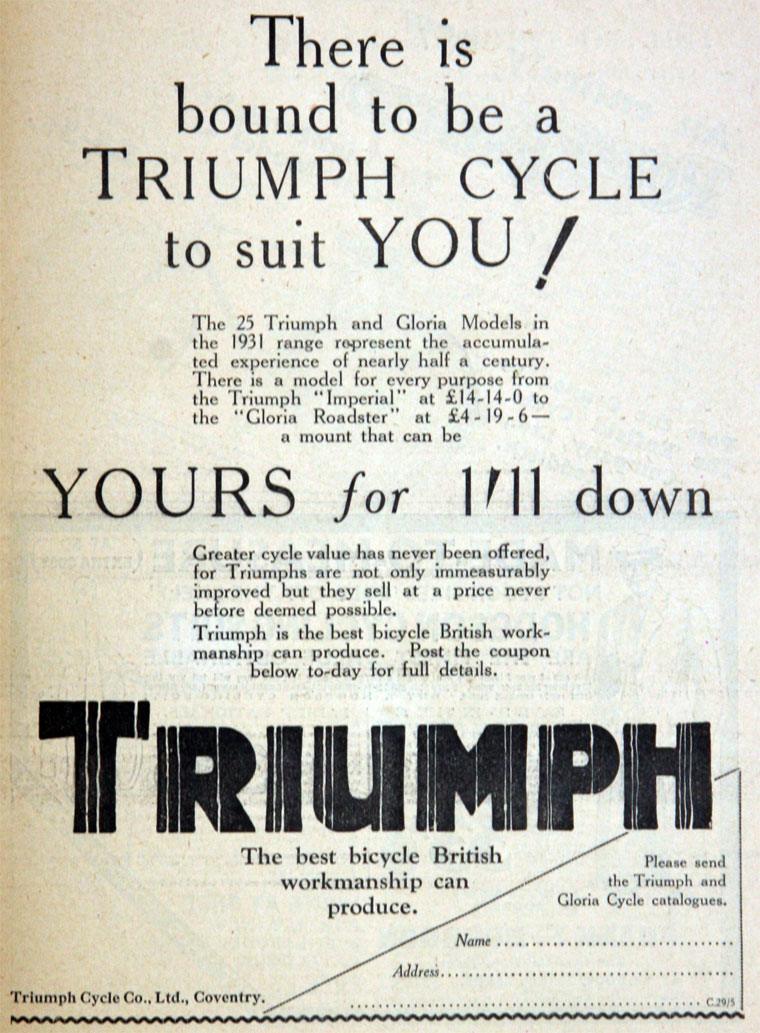 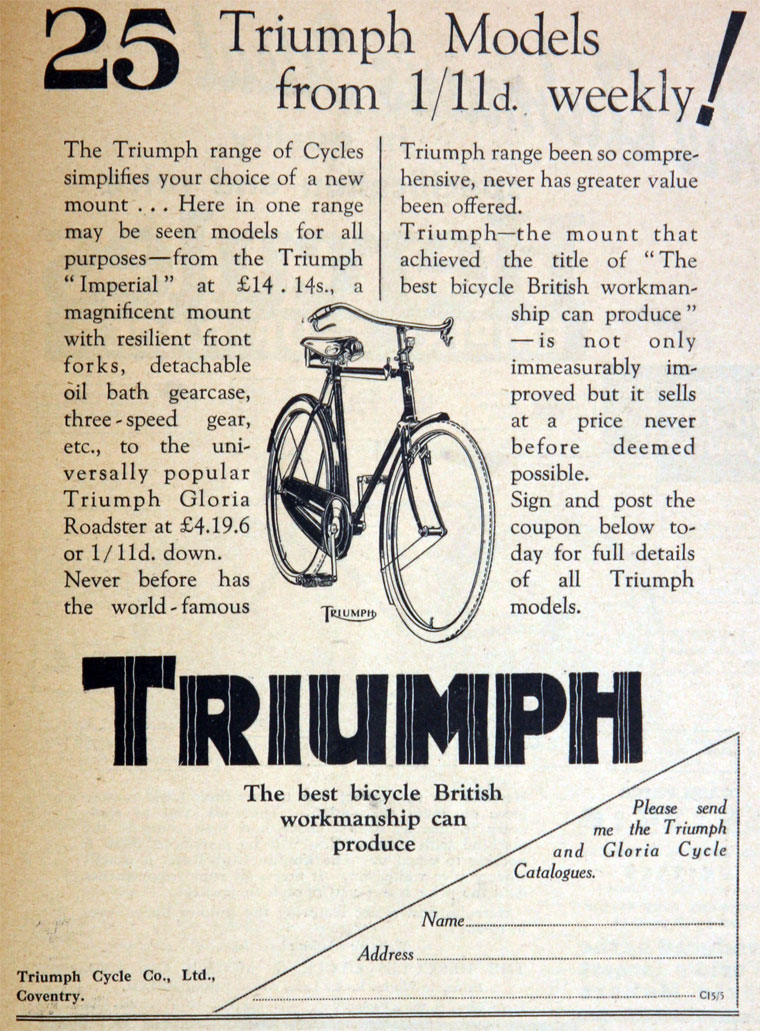 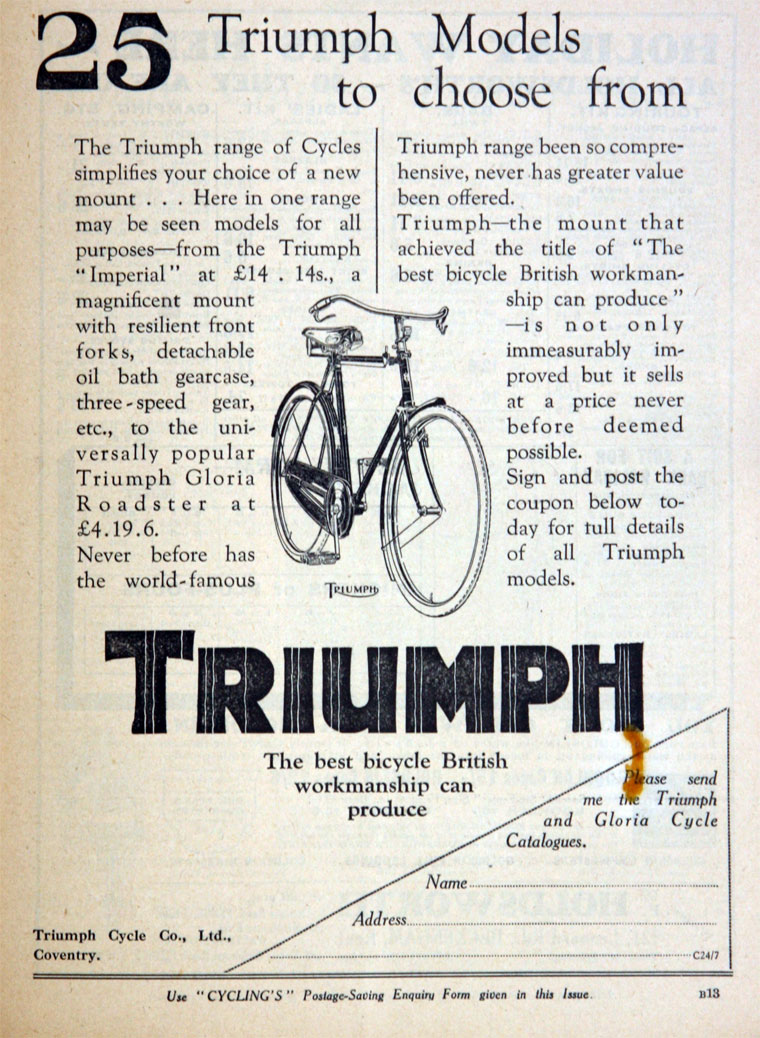 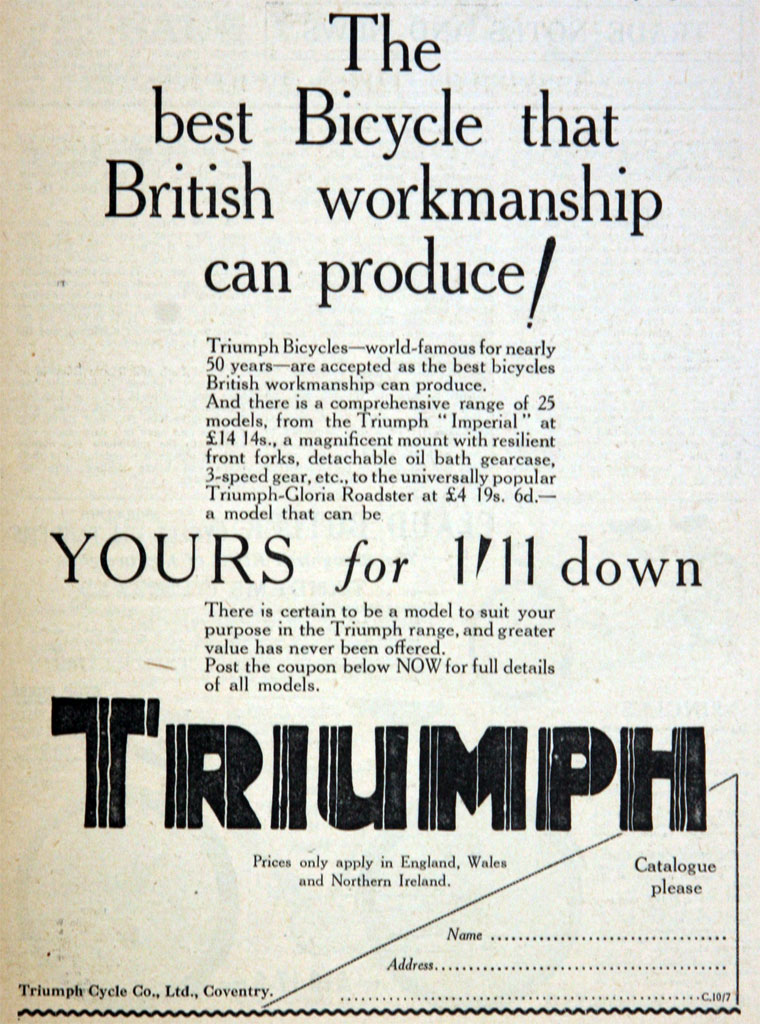 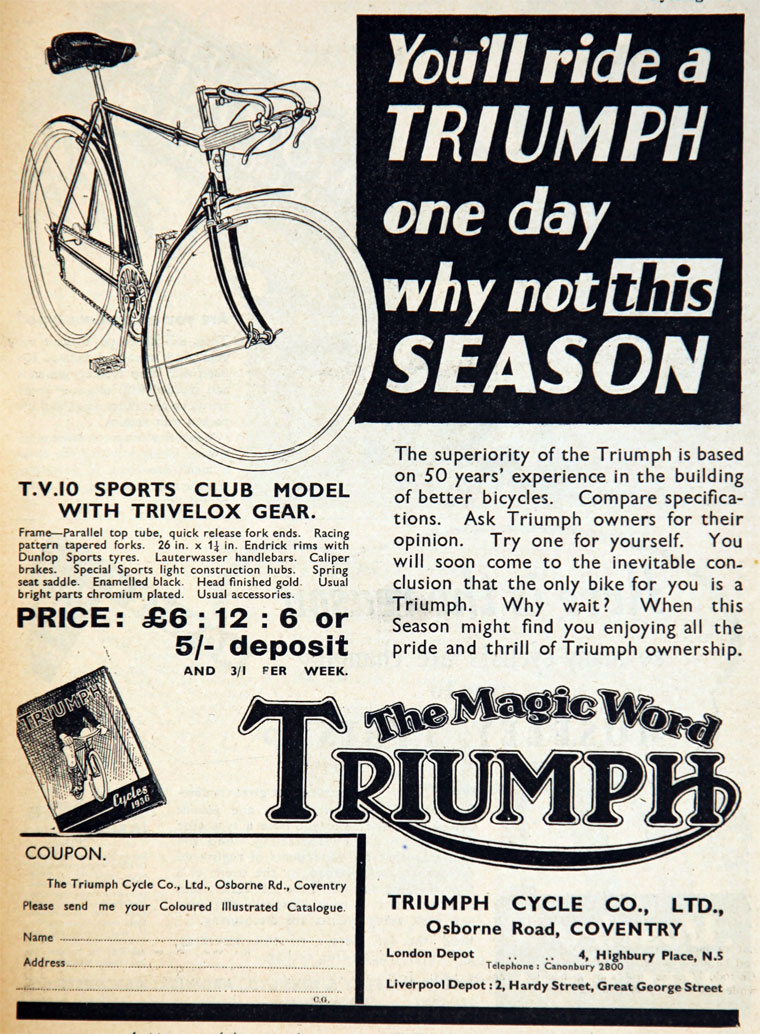 1887 The company registered as the New Triumph Co. Ltd., now with financial backing from the Dunlop Tyre Co.

1887 Bettmann was joined by Mauritz Schulte.

1888 Schulte encouraged Bettmann to transform Triumph into a manufacturing company, and Bettmann purchased a site in Coventry, using money lent by his and Schulte's families.

1889 The company began producing the first Triumph branded bicycles in 1889.

1903 Opened motorcycle production at its unit in Germany.

1912 Listed in Spennell's directory of Coventry as Cycle Manufacturers. [5]

World War I. The outbreak of World War I proved a boost for the company as production was switched to support the Allied war effort. More than 30,000 motorcycles - among them the Model H Roadster aka the "Trusty Triumph," often cited as the first modern motorcycle - were supplied to the Allies. Major orders for the 550cc Model H came from the British Army during World War I and, by 1918, they were Britain's largest motorcycle maker.

1919 Mauritz Schulte left Triumph after conflicting opinions with Siegfried Bettmann, with a 'Golden Handshake' of £15,000. Schulte believed that Triumph should concentrate on car production, Bettmann strongly disagreed. The successor to Mauritz Schulte as General Manager, was Colonel Claude Vivian Holbrook, who worked for the War Office during World War 1 as a motorcycle procurement officer.

By the mid-1920s Triumph had grown into one of Britain's leading motorcycle and car makers, with a 500,000 square feet plant capable of producing up to 30,000 motorcycles and cars each year.

1932 Triumph sold off its bicycle manufacturing facility to Raleigh.

1933 Triumph had been struggling financially; Bettmann was forced out of the chairman's spot; he retired completely in 1934.

1936 The company hit financial problems however and in 1936 the Triumph motorcycle businesses were sold to Jack Sangster of Ariel to become the Triumph Engineering Co. Bicycle production was acquired by Coventry Bicycles [6]. According to some source, Siegfried Bettmann was involved in this.

According to the memorandum of association German Triumph Cycle Work AG had the right to sell bicycles and bicycle parts in Germany, Austria-Hungary, Switzerland, Romania, Bosnia, Serbia, Bulgaria, Greece and Turkey.[9]

From 1899 onward: As a consequence of the crisis of German bicycle industry German Triumph Cycle Work AG incurred considerable losses for a couple of years and could not pay any dividend from fiscal year 1898/99 til 1904/05[11]

In 1903 German Triumph Cycle Work AG started production of motorcycles, but stopped this activity in 1907 because of insufficient demand as these first motorcycles were technically unreliable and too expensive.

In 1909 German Triumph Cycle Work AG acquired Kührt & Riegelmann GmbH in Nuremberg, producer of "Norica" typewriters and strengthend their activities in the field of office machines. Due to this new focus, the company name was changed to Triumph Werke Nürnberg AG in 1911.