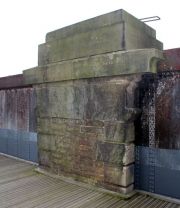 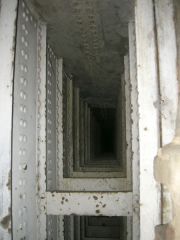 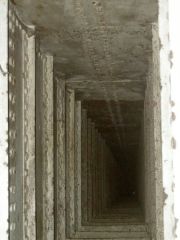 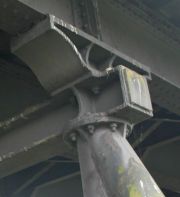 in Torksey, Lincs, on the border with Nottinghamshire.

Torksey Viaduct is an iron railway viaduct constructed between 1847 and 1849 for the Manchester, Sheffield and Lincolnshire Railway, and opened in 1850. It crosses the River Trent and its flood plain. The bridge's main significance is in the very early application of box girder construction for the river channel section. It was also important in focusing attention on the importance of continuity considerations in bridge design.

It was designed by John Fowler, and the wrought iron riveted box girders were constructed by William Fairbairn and Sons.

The river was spanned by two box girders supported by a central masonry pier. The box girder spans were strengthened in 1877 because of increased traffic loadings. Major strengthening work was undertaken in 1897, when two steel lattice girders were introduced in the centre of the bridge. Hangers from the bottom members of these girders support the transverse deck beams (see photo 9, foreground, and photo 15, RHS.

The viaduct is listed at Grade II*. Much of the above information is condensed from the Historic England listing[1]

Passenger traffic ceased in November 1959. Work was carried out in 2016 to allow pedestrians to cross on the north side of the viaduct. Commendably, minimal alteration was undertaken, and much of the original structure can be studied.

A similar, but longer box girder bridge, with two spans of 150 ft, had been designed by Fowler and built by Fairbairn to cross the Trent further north near Gainsborough. This was approved by Captain Wynne in 1848. However, the Government Inspector for Torksey was the redoubtable Capt. Simmons, who considered that the girders were overstressed, apparently giving no credit for the fact that the girders were joined at mid span to constitute a continuous beam. Analysis by William Pole showed that the girders were 50% stronger than Simmons assumed. Arguments rumbled on, and eventually pressure from the MS&LR resulted in the Railway Commissioners giving permission for the bridge to be used, at the company's risk.[2]

Study of the piers supporting the box girders shows that they have been widened southwards (see photo 22). Also, it can be seen that the exposed transverse deck beams on the north side were extended using fishplates (see photos 14 & 15). This was necessary to accommodate the width of the central girder in 1897. Note in photo 22 that, despite the south girder having been moved out, the pier still extends further southwards than northwards. Was provision originally made for tripling the track?

Each of the box girders was installed as two girders, and then joined in the middle to provide a continuous girder. Originally the joint was hidden behind masonry falsework (see photo 12). When the southern girder was moved outwards, its masonry falsework was not replaced on the inboard side (see photo 11), and a smaller capping stone was required. The extra stiffening and lack of falsework can also be seen at the ends of the southern girder.

The southern girder also features extra webs connecting the bottom of the girder to the cross beams (photo 9).

The ends of the box girders are open to the atmosphere, but access is prevented by grilles. A camera can be passed through, revealing the inner structure. See photos 13 & 14. Small transverse plates connect the two side walls. The top of the box girder is closed by a rectangular box section with two cells, each approx 1 ft square. For comparison, the cells at the top of the Britannia Bridge were 21" square. Given the limited access, it would be interesting to know how the closing plates were riveted in place.