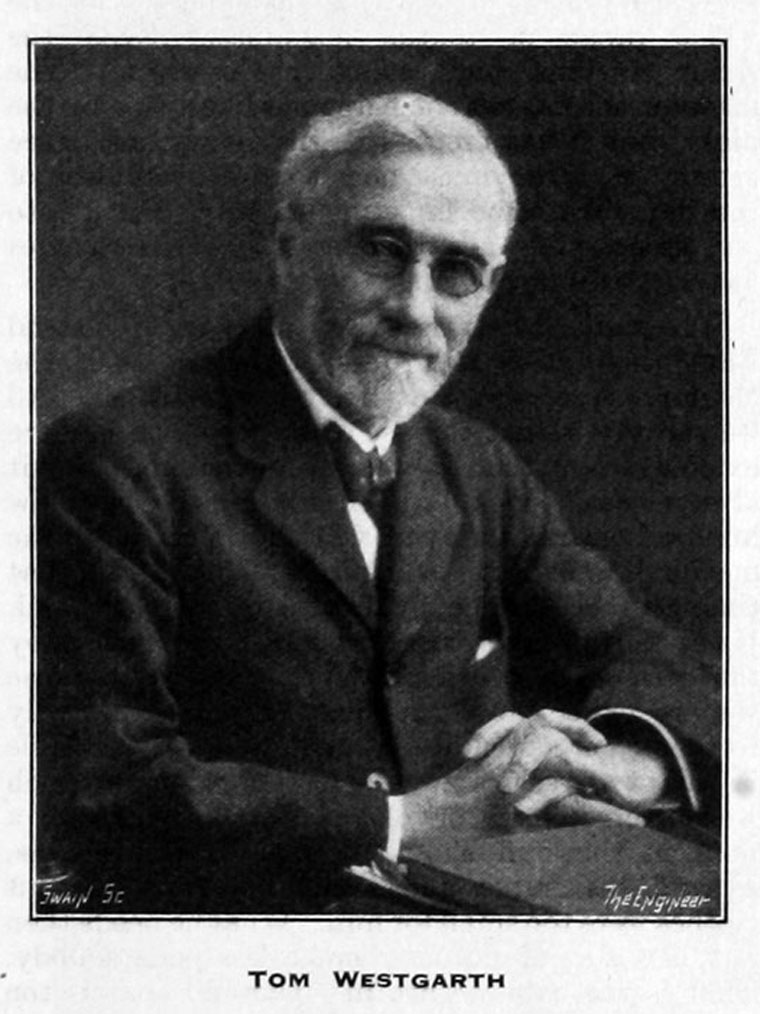 1898 President of the Cleveland Institution of Engineers.

TOM WESTGARTH was for many years joint managing director with the late Mr. D. B. Morison, M.I.Mech.E., of Messrs. Richardsons, Westgarth and Company, marine engineers, Hartlepool.

He was born at Bramham, near York in 1852 and in 1868 commenced a five years' apprenticeship with Messrs. C. and W. Earle, Hull. He remained with the firm until 1881, becoming chief draughtsman and subsequently assistant works manager.

He then went into partnership with Mr. Harold English and founded at Middlesbrough the marine engineering firm of Westgarth, English and Company.

The firm was greatly extended in 1896, when it became Sir Christopher Furness, Westgarth and Company, and acquired the works of the Tees Side Iron and Engine Works Company, of Middlesbrough.

The present title of the firm dates from 1900, when Sir Christopher Furness, Westgarth and Company and Messrs. William Allan and Company, Sunderland, were absorbed in an amalgamation with Messrs. Thomas Richardson and Sons of Hartlepool; Mr. Westgarth was a joint managing director until 1912, when he resigned. He continued to serve on the board, however, and was chairman in 1925-6, after which he remained a director almost until his death, which occurred at Hessle, near Hull, on 30th January 1934.

He was actively concerned with land engineering as well as marine work, and manufactured vertical rolling-mill engines, tilting steel furnaces and metal mixers, water-tube boilers, and condensing plant. He was responsible for the introduction of engines utilizing surplus gases from blast furnaces and coke ovens, which he installed on a large scale for blast-furnace blowing and for driving dynamos, on a contract carried out by his firm.

In 1912 he was associated with Carel Freres, Ghent, designing and constructing a two-stroke single-acting marine oil engine.

During the War he was actively concerned in the opening of a shell factory in Middlesbrough and was later made Honorary Chief Inspector of Inland Engine Shops under the Controller General of Merchant Shipbuilding.

During the session 1924-5 he was President of the North-East Coast Institution of Engineers and Shipbuilders.

.... He was born near Staithtes, on the Yorkshire coast, and served his apprenticeship with C. and W. Earle, Hull. In that yard he worked in the drawing-office with the late Mr. A. E. Seaton, who later edited the well-known marine engineers pocket-book, and he rose to be chief draughtsman and assistant works manager. In 1881 Mr Westgarth founded with Mr. Harold English the marine engineering works of Westgarth, English and Co., at Middlesbrough. This firm became, Sir Christopher Furness, Westgarth and Co., Ltd., in 1896, and acquired the old established works of the Tees-side Engine Works Company, of Middlesbrough, ....

.... When the great works of the Cargo Fleet Iron Co., Ltd., were laid out at Middlesbrough, a contract was undertaken and successfully carried out by Furness, Westgarth and Co., Ltd., for the whole plant, including buildings, rolling mills, engines and boilers, gas cleaning apparatus, &c. The chief feature of these works was the introduction upon a large scale of engines for blowing the blast-furnaces and driving dynamos by the use of the surplus gases from the blast furnaces and coke ovens, gas cylinders of 51 1/4in. diameter being used. This bold step was carried out by Mr. Westgarth under the patents of the Belgian firm of John Cockerill and Co., and led to great developments in the use of waste gases in Great Britain.