1. The large degree of skew is evident here 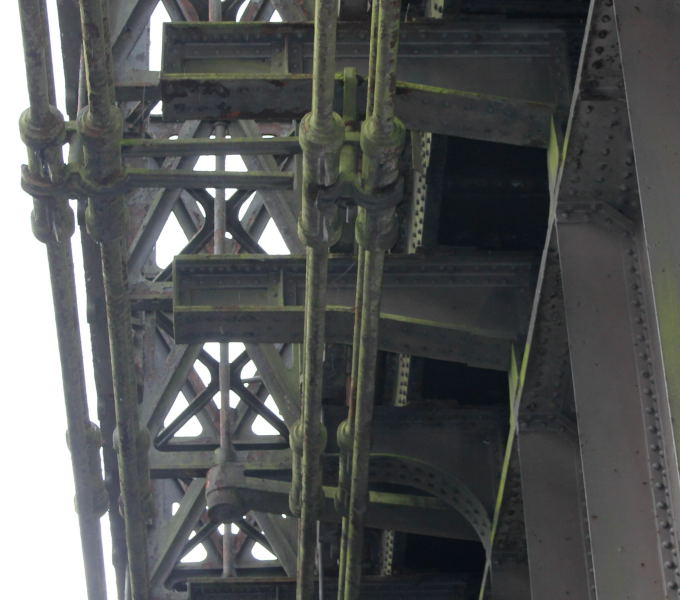 Located just south of Todmorden town centre. Best seen from the canal towpath. Access from Bacup Road which passes under the railway (can park on A6033 Rochdale Road).

Designed by George and/or Robert Stephenson.

Built in 1840. Extensively modified in 1906 by the insertion of deep steel beams to carry the load, while retaining the iron structure as a facade.

As built, this would have been a difficult bridge to 'read', but the addition of steel girders in 1906 has added to the difficulty in interpreting the original design.

It was built in 1840 as a bowstring (tied arch) bridge with a suspended deck, a type pioneered by George Leather. Contemporary lithograph here.

Each side of the bridge comprises a pair of girders, spaced approx 5 ft apart. These are joined to each other by transverse X-braces. Each of these girders has a cast iron arch as its main member, and the 'string' of this 'bow' is a group of four tensioned rods. Each of these tensioned wrought iron rods comprises 4 or 5 bars joined by cast iron spools with tapered cotters (Photo 5).

Below the arch, and cast integral with it, is a series of vertical ribs connected to a longitudinal member. Judging by its slenderness, this horizontal member was not intended to be a significant extra string to the bow. The vertical ribs are continued above the arch and joined in pairs by Gothic arches, which in turn join a horizontal member (not quite horizontal, being slightly inclined from each end to the crown). The bottom of each vertical rib ends with a small lug with a hole. The purpose of these holes is not obvious. However, it is probable that they were there to accommodate decorative cast iron 'skirts' to hide the tie bars. This assumption is supported by the contemporary lithograph and, more convincingly, by drawings of Robert Stephenson's 1838 bridge which carried the London & Birmingham Railway over Regent's Canal near Chalk Farm[1]. These drawings show what appear to be substantial horizontal flanges at the top and bottom of the outer girders, but these are merely thin decorative castings. It therefore seems likely that Gauxholme viaduct had similar decorative castings at the bottom and top of the girders.

Each arch and its 'Gothic windows' might appear to be a single casting, but clearly it was necessary to assemble it from a number of smaller, manageable castings. The joint lines are very discrete when seen from the front, but the flanges on the back can be clearly see, for example in Photos 9 & 10.

The castings were produced by Joseph Butler and Co of Stanningley Iron Works, near Leeds, whose name, address and 1840 construction date can just be seen cast into the arch at its crown. The patternmakers chose not to use the largest font available in the stores.

Photos 9 & 10 also show the vertical and horizontal cast iron 'X' braces. Passing through the middle of the vertical 'X' braces are the remnants of vertical tie rods. These originally supported transverse beams, which in turn supported the deck. These were all made redundant when the steel girders were fitted in 1906. New transverse beams sat on top of the new girders, and they supported the deck. Even in 1906, the historic value must have been appreciated, because the cast iron arches were retained as a façade. Bridge enthusiasts owe a debt of gratitude to the determined and ingenious engineers who addressed the problem of inserting a stronger modern structure within the fabric of this historic bridge (and many others).

It appears that several of the original transverse cast iron beams were also retained for posterity (see Photos 5 & 6). Their role might not be merely as passengers, though, as they appear to be in contact with the rail-supporting girders, and are supported from the main 1906 girders by stools.

Having stated that the original deck was suspended from the cast iron girders by wrought iron rods, the reality is not so simple. The degree of skew is such that only a certain number of the transverse beams could have both ends suspended by the girders. The other ends of these were presumably supported by the masonry piers.

The castellated abutments were also retained, and continue to make a bold statement about the heyday of railway construction.