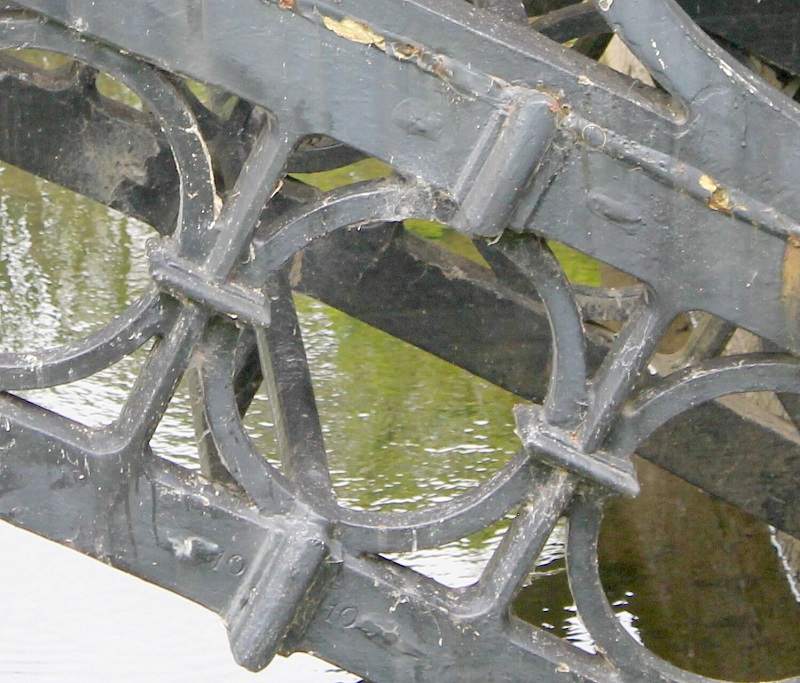 Cast iron bridge across the River Lovat (Ouzel), built in 1810.

Designed by Thomas Wilson and Henry Provis. Castings produced by Walker of Rotherham.[1]

The design follows the same basic principles as Thomas Wilson's earlier bridges, namely the use of relatively lightweight arch ribs assembled from a series of slender cast iron frames (cast iron voussoirs). The arch ribs support cast iron spandrels characterised by a pattern of diminishing circles. These in turn supported a cast iron deck. Note: Voussoirs are traditionally the wedge-shaped stone blocks which form the arch of masonry bridges. A spandrel is the structure between the arch and the deck. In this case the spandrels comprise four castings above each of the six arch ribs.

The detail design differs from the earlier examples of Wilson's work such as Wearmouth Bridge and Spanish Town Bridge (Jamaica), whose cast iron voussoirs were short and 'ladder-like', having simple radial arms between the curved ribs. Instead, Tickford Bridge has a combination of radial and circular ligaments between the two chords of the voussoirs. The voussoirs of adjacent arches are tied together transversely by cast iron frames rather than by tubular members. These frames are ladder-like.

The method of interconnecting the voussoir castings is also different, having a form of mortice and tenon joint tightened by tapered cotters (wrought iron wedges). The ends of these cotters can be seen in photo 6. Note the number 10 on the castings adjacent to these cotters: these were to help to ensure that the components were correctly assembled on site. Focusing on the interface between the arch (voussoir) castings, the slightly enlarged pad adjacent to the '10' is part of the casting, but the larger radial lump is part of the transverse 'ladder' casting. Note the ring here is not a complete circle: each half of the ring is part of its voussoir casting. This is more apparent in photo 7, where the casting abuts the 'springing' plate. Also note the unused holes for cotters at this location.

These cast iron spring plates represent another difference at Tickford. They are set at an angle on the masonry abutments, whereas on the earlier bridges the arches are embedded in the masonry. The differences may reflect the influence of Henry Provis.

The spandrels were cast in open moulds. This is indicated by the slightly concave face just visible on the rings in photo 10.

The concave underside of the spandrels does not sit diectly on the convex top of the voussoirs: there is an infill of material to take up irregularities. This material would probably have been lead or 'rust cement'.

An interesting method of reinforcement, using 'Replark' carbon fibre fabric, has been undertaken on the bridge [2]