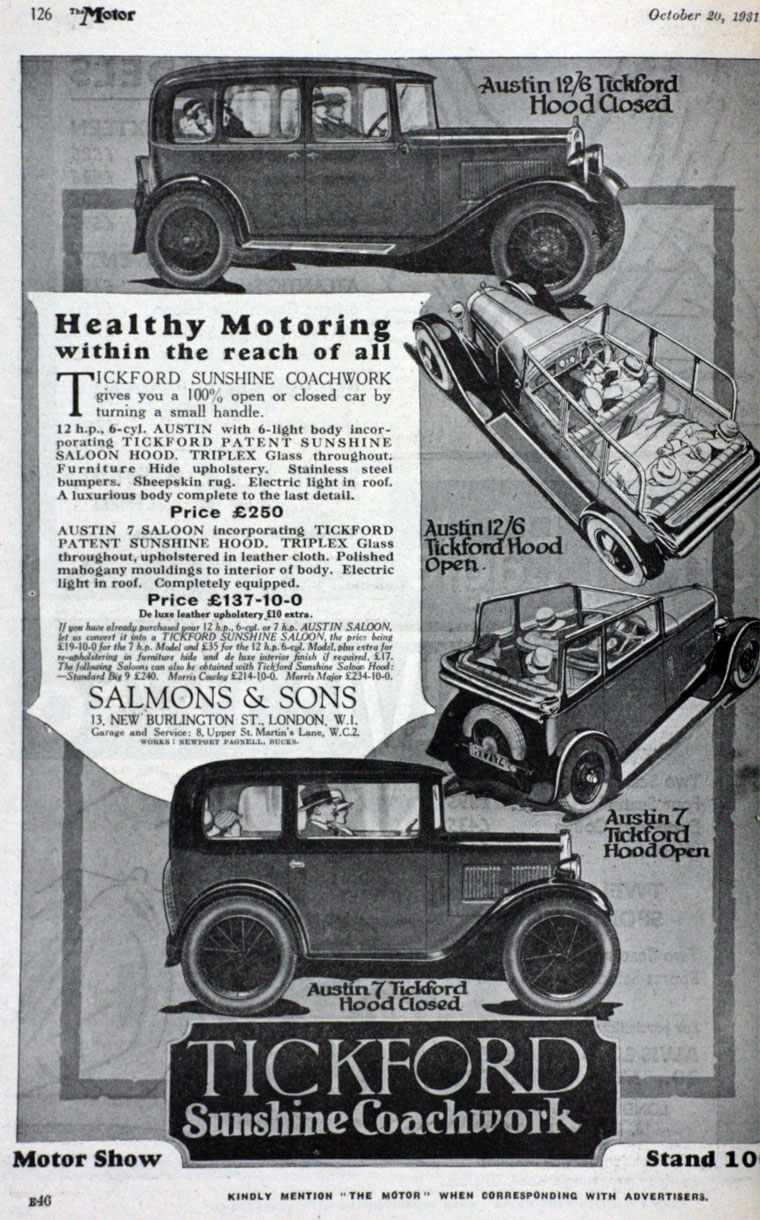 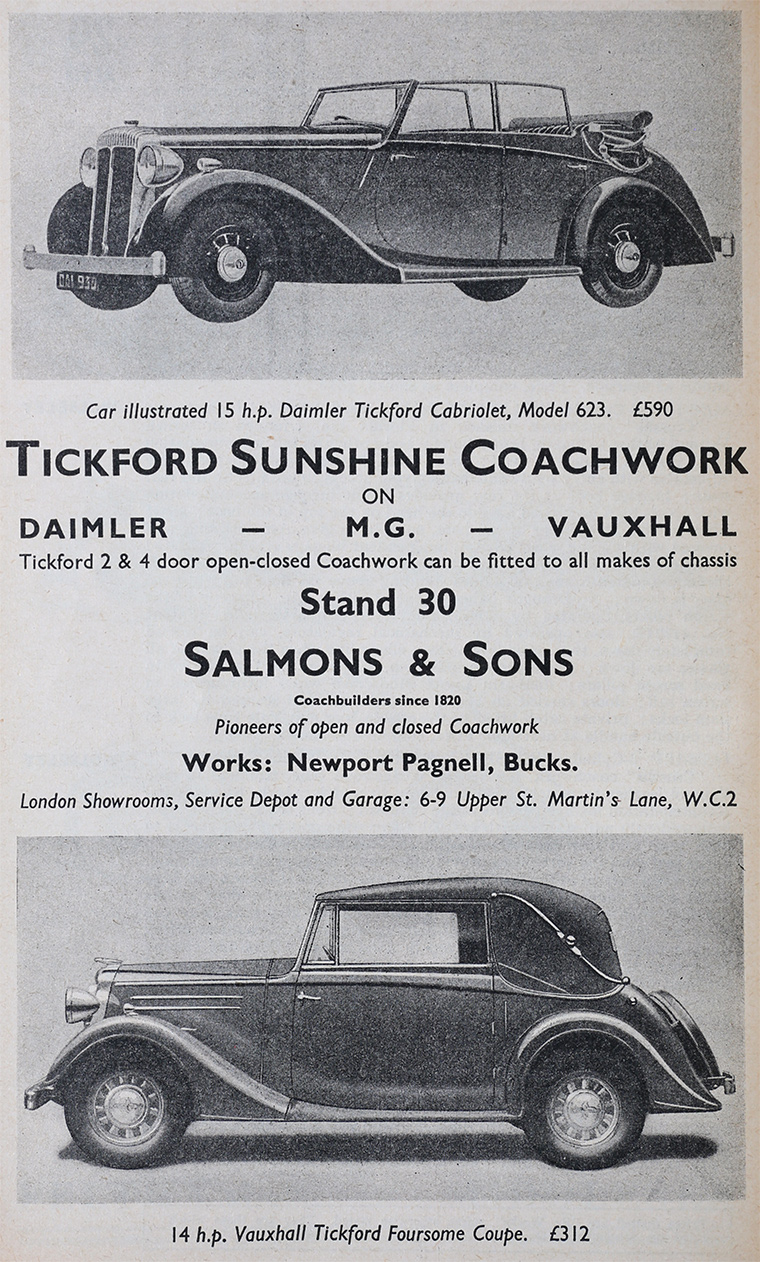 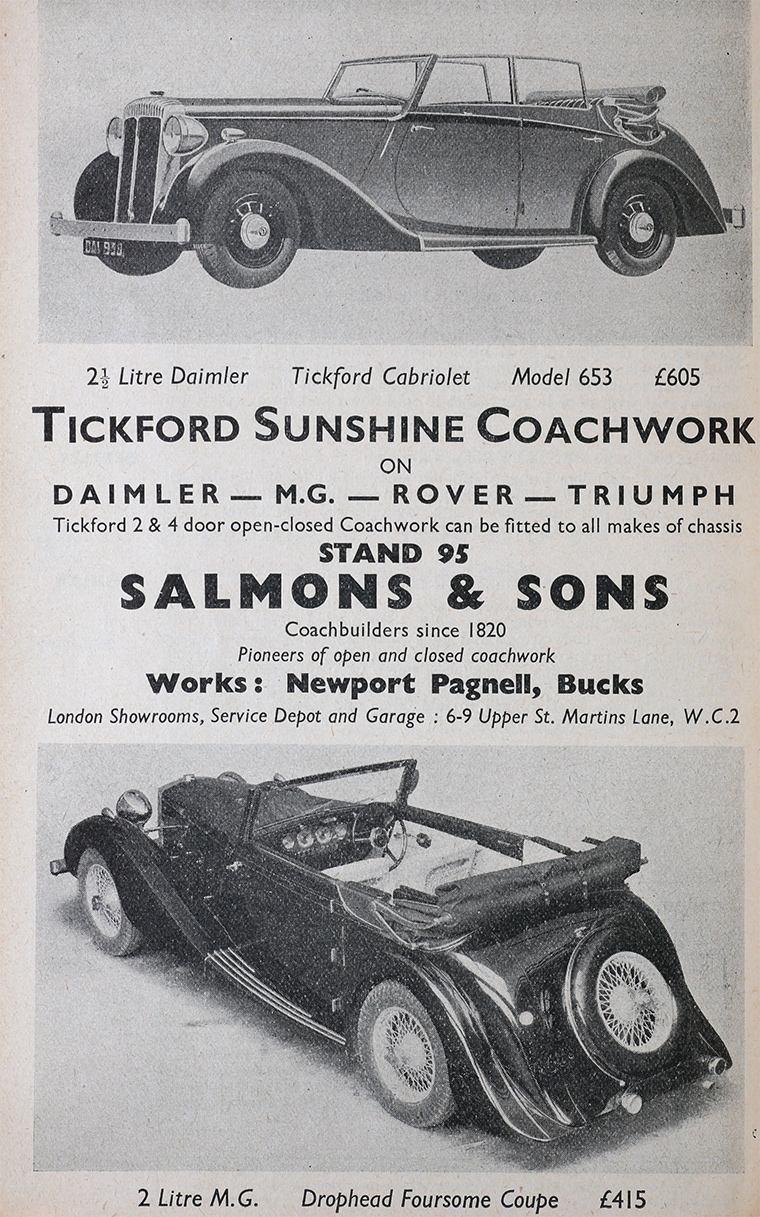 October 1938. Salmons and Sons and Tickford. 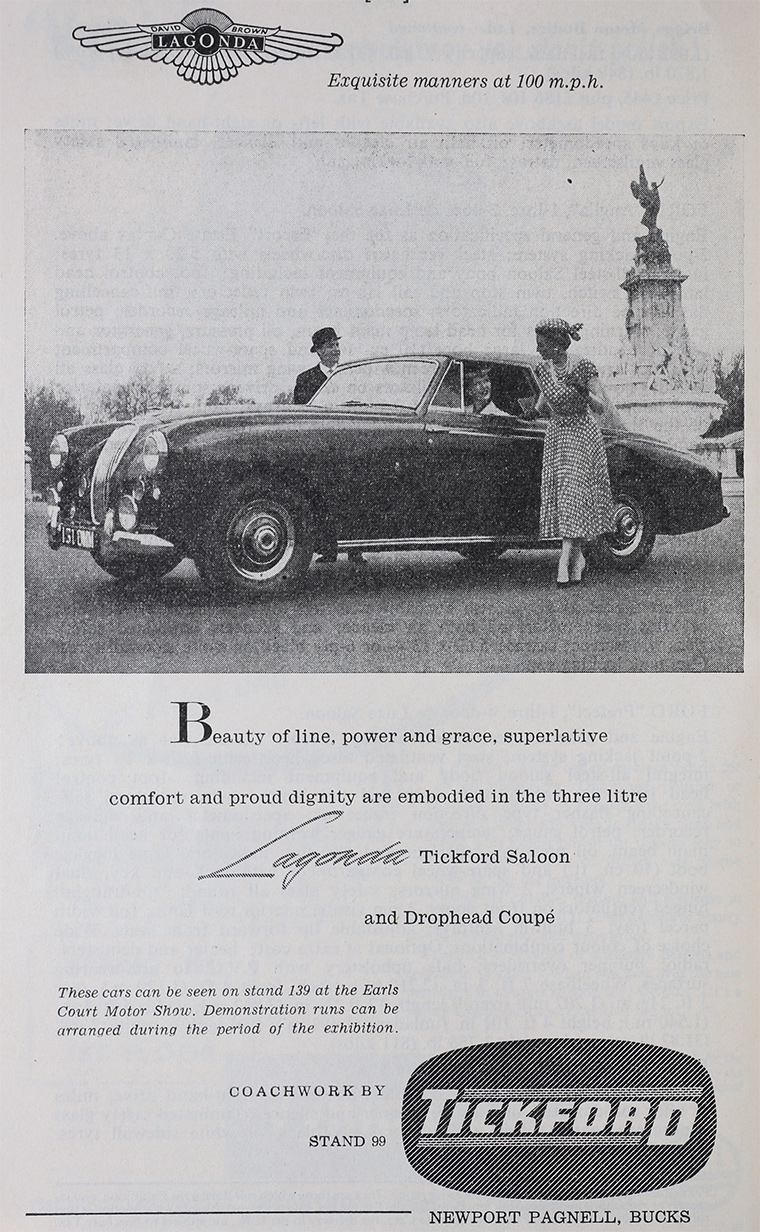 Tickford Motor Bodies is an automobile engineering, coachbuilding and tuning company based at Newport Pagnell

The company had small coachbuilding origins in the 1820s as the family firm of Salmons and Sons who were based at Tickford Street in Newport Pagnell. With the advent of the internal combustion engine, the company progressed into developing coachbuilt cars as early as 1898 and prospered.

1925 Announced the Tickford All Weather saloon, which was actually a convertible with the hood mechanism operated by inserting and turning a handle in the rear quarter-panel.

1955 bought by David Brown, who was already the owner of Aston Martin (since 1947) and Lagonda (since 1948) and an extensive user of Tickford bodies.

Browns soon moved Aston Martin onto the site at Tickford Street where it remained until Ford moved DB7 production to Bloxham and then to Gaydon for the DB9 and DBS. The Tickford name disappeared between the late 1950s and 1981.

1981 Aston Martin created an engineering service subsidiary and chose the name Aston Martin Tickford, rekindling the specialist service available to all vehicle makers, which had been the Tickford philosophy for the first half of the century.

With the changing fortunes of Aston Martin, the company moved into a purpose-built facility in Milton Keynes under the separate ownership of C. H. Industrials plc; despite carrying out a lot of unseen, "back-room" engineering projects for major manufacturers, Tickfords gained most publicity from adding engineering and tuning to its coachbuilder roots allowing it to develop special products like the 140 mph, turbocharged Tickford Capri for Ford.

After the Capri, Tickford worked with, among others, MG to create the Maestro Turbo and with Ford to create the road-going Sierra Cosworth RS500 and the homologated version of the RS200. These vehicles were made in a factory set up near Coventry; a railway division was set up in Nuneaton to design interiors for underground and mainline train carriages.

The hood of the Jaguar XJS cabriolet was also designed by Tickford. These cars were originally converted by Tickford themselves, but it was so successful that Jaguar set up a convertible production line to cope with demand.

1990 During the collapse of the CHI Group, the directors of Tickford did a buy-out and saved Tickford from going into receivership, partially funded through the sale of the railway division to Babcock International. Tickford was now back in to origins of engine and vehicle engineering and worked on developing new markets. The company won projects in Detroit and the Far East and set up liaison offices in the USA and Germany.

1991 After a worldwide search, Ford of Australia selected Tickford as a joint-venture partner and Tickford Vehicle Engineering Pty Ltd (TVE) was set up in Australia as the high performance car division of Ford in Australia. TVE is best known for building the Ford Falcon XR6 and XR8 models, and they also released a range of higher performance "T-Series" performance cars based on the Falcon in the late 1990s and early 2000s. Tickford did the engineering work in Milton Keynes together with a local subsidiary facility set up in Melbourne. Also during this period, Tickford designed, developed and built Formula One engines, including some with unique 5-valve cylinder heads. A Tickford 5v version of the Judd V8 was commissioned by Camel Team Lotus for Nelson Piquet and Satoro Nakajima to use.

Most recently Tickford set up a production line in Daventry to convert the Ford Puma into the limited edition Ford Puma Racing (just 500 were built) and did most of the engineering design and development of the Ford Focus RS at Milton Keynes, also providing a build facility next to Ford’s Saarlouis plant.

2001 the Tickford Group was acquired by Prodrive, the British motor sport company

In December 2006, the management team of Prodrive Test Technology, running the former Tickford site at Milton Keynes, purchased the business from Prodrive. The company is now thriving as Tickford Powertrain Test Ltd, delivering the engine and vehicle testing needs of vehicle manufacturers, component companies and the catalyst and petroleum industries.