2018. Looking from the Yorkshire side to Barnard Castle town 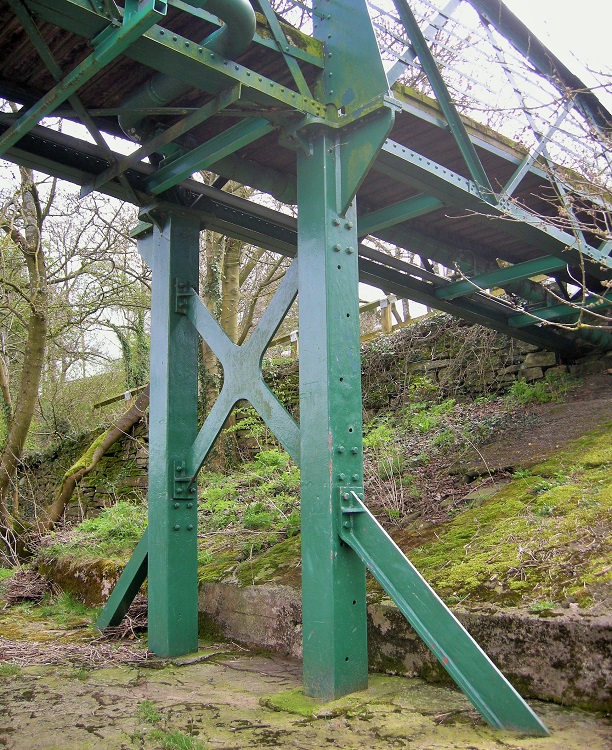 Cast iron pier on Yorkshire side

This is a wrought iron 'double Warren truss' bridge built by Wilson Bros & Co of Darlington in 1882. Some of the iron sections were rolled by the Stockton Malleable Iron Co. The span between the cast iron piers is 170 ft (51.8m).

Crosses the River Tees between The Bank and the fomer Thorngate Mill. Known locally as the Green Bridge.

It has impressive length, but, for tall pedestrians, surprisingly low headroom.

1924 'BRIDGE COLLAPSE. Exciting Experience at Barnard Castle.
Two pedestrians had a thrilling experience near Barnard Castle when crossing Thorngate footbridge a much-used structure, on Thursday evening.
The old dye-house which formed part of the cloth mill owned Messrs Holroyd and Fieldhouse, collapsed and the failing masonry crashed on the end of the bridge, tearing a gap which cut off access to the bank.
A young woman named Coulthard, employed as a maid by Major Heslop, and living on the Yorkshire side of the river, was mid-way across the bridge when she heard the rumbling of falling masonry. She made a dash to reach the bank of the river, but was too late, and she fell into what was formerly the mill race. The second pedestrian, a man, who tried to spring clear, also fell into the river bottom.
Both escaped serious injuries, although the girl suffered from slight bruises as the result of her fall. It is thought that the cause of the occurrence was the undermining of the banks by the river.
The only portion of the building standing was the outer wall, which was left in a precarious state. No pedestrians were allowed over the bridge yesterday and watchmen were on duty.'[1]

1881 'FLOODS IN THE NORTH OF ENGLAND. BRIDGE WASHED AWAY AND TWO MEN DROWNED.
Owing to the melting of the snow on the moors and hills near the upper reaches of the rivers in Durham, and Yorkshire, they have become flooded to alarming extent, and great damage has resulted. The Tweed, the Wansbeck, and the Tyne have overflowed their banks in many parts, and owing to the rising of the river Wear, Witton Gilbert Ironworks were stopped last night. The rising of the Tees has, however, proved most destructive. A melancholy catastrophe occurred at Barnard Castle, where Thorngate foot bridge, a cast iron structure, 300 feet in length and 14 feet high, was washed away, two men who were on it at the time going with it. From Darlington to Croft the road was impassable.'[2]