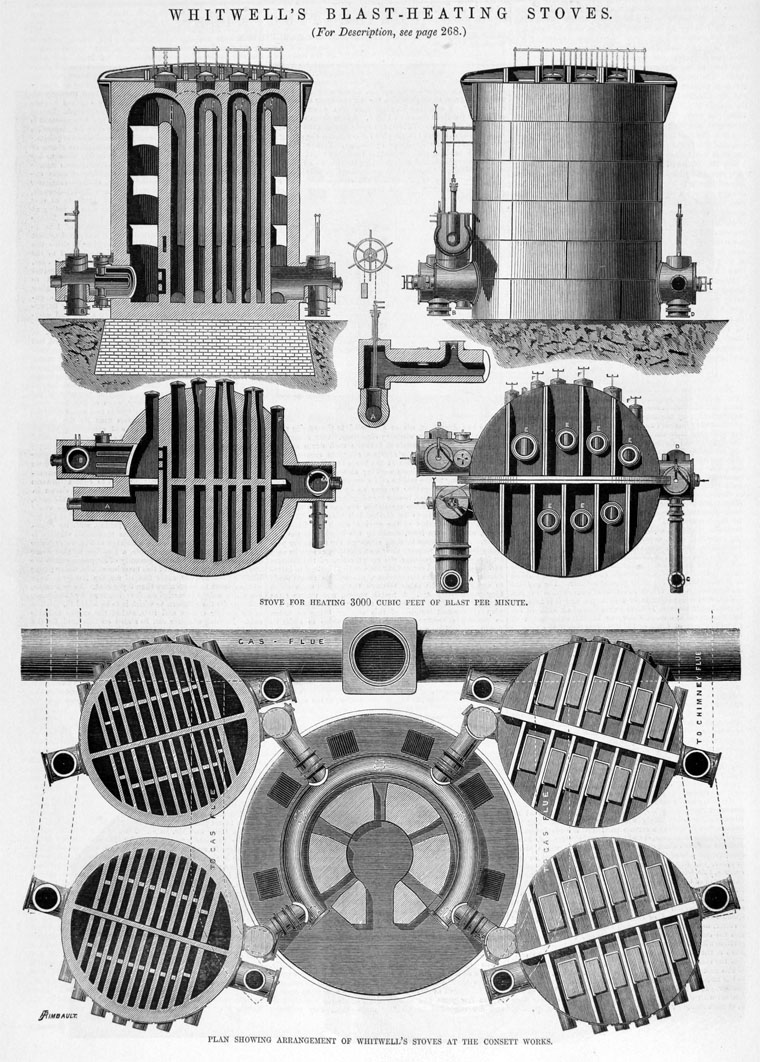 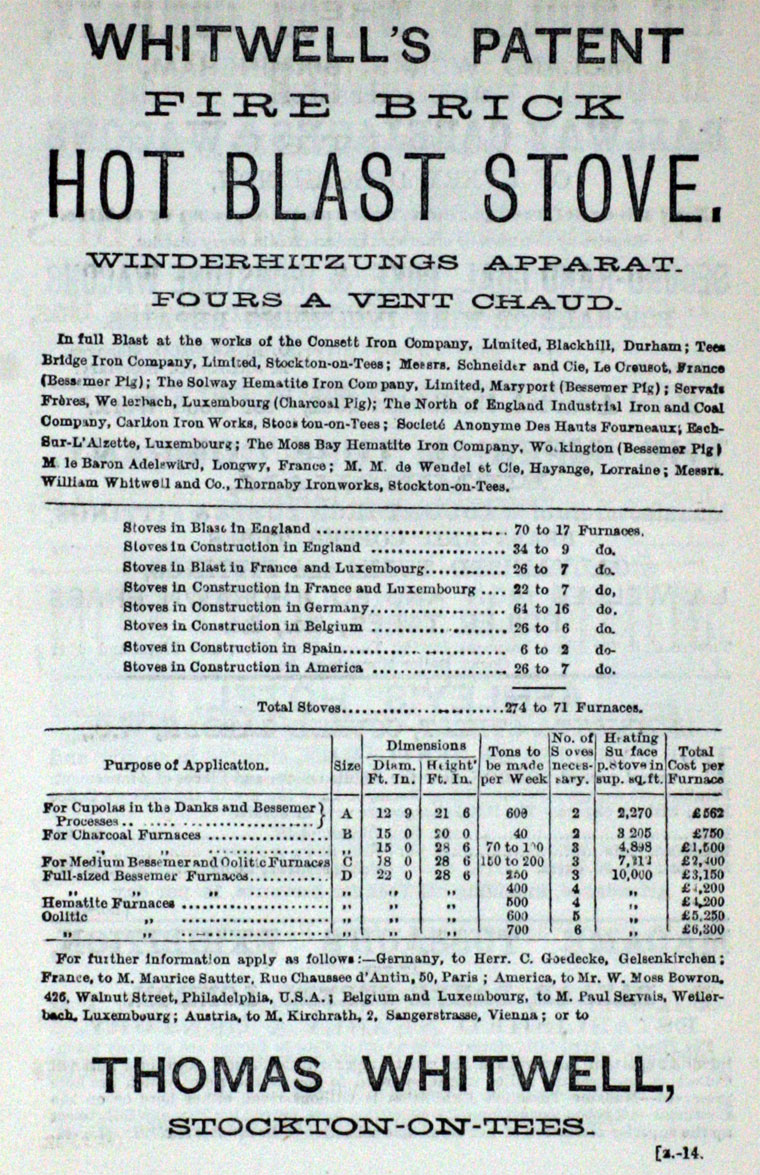 THOMAS WHITWELL was born on 24th October 1837 at Kendal.

He was the active engineering partner in the Thornaby Iron Works of Messrs. William Whitwell and Co., Stockton-on-Tees; and was the inventor of the regenerative hot-blast stoves with fire-brick walls, known by his name, of which he gave a description to the Institution in 1870 (see Proceedings 1870, p. 94).

He was one of the original members of this Cleveland Institution of Engineers, of which at his death he was President; and took a leading part in all public matters at Stockton.

In pursuit of information respecting the metallurgy of iron, he travelled over all the principal iron-making districts of Europe and America; and some of the results of his enquiries were embodied in papers contributed by him to the Cleveland Institute and to the Iron and Steel Institute.

He was the originator and managing director of the Southern States Coal and Iron Company, owning valuable mineral property in Tennessee.

His death occurred on 5th August 1878, at the age of forty, in consequence of injuries sustained by an explosion of steam which took place while he was examining a new form of heating furnace recently erected in connection with the rolling mills at the Thornaby Works.

Mr. THOMAS WHITWELL.-The Iron and Steel Institute has sustained a great loss by the death of this estimable and accomplished metallurgist, which took place in July last under very shocking and painful circumstances. One of the most intimate friends of Mr. Whitwell—Mr. Jeremiah Head—has contributed to the Engineer the following account of the sad event:— "Situated at South Stockton on the banks of the river Tees, are the ironworks of Messrs. William Whitwell & Co. The active partners of the firm were Messrs. William Whitwell, who presides over the commercial, and Thomas Whitwell, over the engineering or practical department. Recently, a Bicheroux heating furnace has been erected in connection with the rolling mills. The furnace consists essentially of a heating chamber or hearth, and a chimney, surmounted by a damper, just as in an ordinary heating furnace. But instead of the ordinary fire-grate, the back part of the furnace terminates in a descending flue, which enters a gas producer. The gas producer is below the floor line altogether, and is formed by boxing off part of a cavity or pit, about 10 ft. deep, and rectangular in horizontal section. The part of the pit which is not included in the gas producer forms the ash-pit, and is covered over by a grating admitting air. The partition which separates the gas producer from the ash-pit inclines from the latter as it descends, forming a slanting grate. This slanting grate—or rather, dead-plate, for it is impervious to air—consists of castings lined on the inner face with firebrick. The gas producer is roofed over with arched brickwork, except where it communicates with the furnace and at the corner where it joins the upper part of the dead-plate. At this point are a series of openings through which the coal is fed into the producer, and which are kept closed with green coal. At the lower part of the dead-plate are a series of " poke holes " stopped with bricks, and then come a row of ordinary flat grate-bars, on which the fuel rests, and which are capable of being pulled out to let the fire drop into the ash-pit.

"It is necessary here to add that the lowermost casting forming the dead-plate, and which is known as the ‘tymp,' having been found to burn away and let the brickwork down, had in the Thornaby furnace a pipe cast in it through which water was kept flowing. The grating covering the ash-pit is provided with a manhole, 2 ft. 6 in. square, at one corner, through which a ladder can be reached leading down into the ash-pit. At the bottom of the ash-pit water usually stands to. a certain depth, for the purpose of extinguishing any hot coals which may fall, and for supplying a little steam to the gas producer. Such is an approximate description of the experimental furnace at Messrs. Wm. Whitwell & Co.'s works, a section of which we annex.

"Something appears to have gone wrong with this furnace, and on Sunday evening last Mr. Thomas Whitwell went to the works and there met his draughtsman Mr. Brooks in consultation about the furnace. The following morning – Monday - at about half-past eleven, Mr. Whitwell again went to the furnace with his foreman fitter John Thompson. It had been set to work that morning, but at ten o'clock the furnace-man had left it. He complained that the furnace would not heat the iron. There was a leak of water at the tymp which deadened the fire, and stopped combustion and the generation of gas. He therefore drew his charge and went home, leaving, as he says, the damper up. Messrs. Whitwell and Thompson both descended into the ash-pit, by way of the manhole and ladder, and there they remained a short time. Only one man, a millwright named Bamborough, was near. He passed over the grating soon after and saw them both stooping down and doing something like drawing out a grate bar. He then went away. Suddenly some kind of explosion took place in the ash-pit. As to the precise nature of what happened accounts differ. Some say the damper was down upon the chimney, unobserved by them when they descended, or put down by them; that, consequently, there was an accumulation of gas in the furnace; that they removed one or two grate bars, and facilitated the formation of an explosive mixture between the gas of the producer and the air of the ash-pit; that this mixture straightway exploded, and surrounded them with flame, steam, carbonic acid, and so forth. Others think there was simply a heavy fall of live coals into the water and a rapid formation of steam to the exclusion of air; and there are various other hypotheses as difficult to prove as to disprove.

"What was really found by the crowd of workmen who rushed to the scene of the explosion, was poor Thompson emerging from the manhole, fearfully scalded or burnt; and after him, and in the same condition, or worse, Mr. Whitwell, who had had to wait his turn, in, no doubt, fearful agony, as there was only room on the ladder for one at a time. On gaining the surface both men fell down from exhaustion. They were conveyed to their respective homes as quickly as possible, Mr. Whitwell on a stretcher, and Thompson in a cab, and three doctors were summoned to do what little human skill can do in such cases. The condition of the sufferers was distressing to witness, and it will serve no useful purpose to attempt to describe it here. It is necessary to say, however, that the appearances in Mr. Whitwell's case were those of scalding only, while in Thompson's case the hair and whiskers had been singed by the flame, in addition to the scalding of the body. In both cases the scalding extended to the mouth, and probably to the respiratory organs generally. It was soon apparent there was no hope. Mr. Whitwell was sensible for some hours, but at six in the evening he became unconscious, and so remained until about ten, when he passed quietly away. Thompson did not lose consciousness till half-past four on Tuesday morning, when he also entered his last rest.

"It will now be understood why there is mourning in Cleveland. Thompson has left a wife and five children to mourn the absence of their bread-winner, Mr. Whitwell, fortunately, was unmarried, but his loss will be terribly felt notwithstanding. Wherever iron is smelted, all the world over, the name of Whitwell, and his improvements in air-heating stoves, are familiar as household words. He was one of the original members of the Cleveland Institution of Engineers, and at his death was its president.

"He was the originator and managing director of the Southern States Coal and Iron Company, who own valuable mineral and other property in Tennessee. He was a leading public man in Stockton, and specially identified himself with everything of an educational and philanthropic nature. He was one of the special commissioners for administering the 'Friends" war victims' fund in France during and after the Franco-German war. In fulfilment of this mission he was four months in France in those perilous times, and underwent many hardships and encountered various strange adventures. On one occasion he was imprisoned at Metz by the German Governor for thirty-six hours, and more than once was in imminent danger of his life.

"In pursuit of information respecting the metallurgy of iron he travelled over all the iron-making districts of Europe and America, and some of the results of his inquiries are embodied in papers contributed by him to the Cleveland Institute of Engineers, and the Iron and Steel Institute. Only a few months since his presidential address to the first-mentioned Institute, 'On Blast Furnace Practice,' was delivered and published in their Proceedings,' and it has since been printed in the principal technical journals on both sides of the Atlantic. He also frequently gave lectures to popular audiences upon his travels and various other subjects in which he took an interest.

"Mr. Whitwell, or Tom Whitwell, as he was always called by those who knew him well, was a man of genial disposition and indefatigable industry. His perseverance in gathering information was most remarkable. He was respected alike by those who agreed with all his views, and those who did not. Take him all in all, we shall scarcely see his like again."