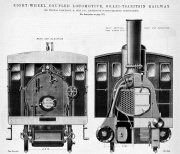 THOMAS URQUHART, who was for many years Locomotive Superintendent of the Grazi-Tsaritzin Railway in South Russia, died at his residence, Delny House, Delny, Ross-shire, on the 8th July, 1904.

Born at Kilmuir-Easter, Ross-shire, in 1843, he served a pupilage at the Culcairn Ironworks in his native shire, at the expiration of which he came to Glasgow, where, after working for two years in the Clydebank Foundry, he accepted a post as draughtsman in Neilson Brothers' engine works.

In 1868 he was deputed by the late W. M. Neilson to represent the firm in Russia on the construction of the Orel-Vitebsk Railway. Having brought this contract to a successful completion, he transferred his services to the Grazi-Tsaritzin Railway Company, for which he erected stationary engines, bridges and buildings on the line, and was subsequently engaged as Locomotive Superintendent. He held that appointment for more than twenty years, from 1871 until his retirement in 1892.

Mr. Urquhart was greatly interested in the subject of liquid fuel in locomotives, and after conducting some experiments in 1874, he successfully introduced a method of burning oil-fuel in the engines of the Grazi-Tsaritzin Railway, with the result that by 1885 oil-fuel had supplanted coal over the whole system.

He subsequently published several pamphlets on the subject of his researches, and was the author of Papers read before various engineering societies, among which may be mentioned his note on 'Communication in Trains,' contributed to the Proceedings of this Institution. He was awarded two gold medals by the Russian Government for his services to railway engineering.

After his retirement Mr. Urquhart occupied himself chiefly with the care of his estate at Delny, where he carried out many improvements, and with local affairs, in which he took a keen interest. He was a Member of the Institution of Mechanical Engineers and of the Imperial Institute.

Mr. Urquhart was elected a Member of the Institution on the 1st March, 1887.