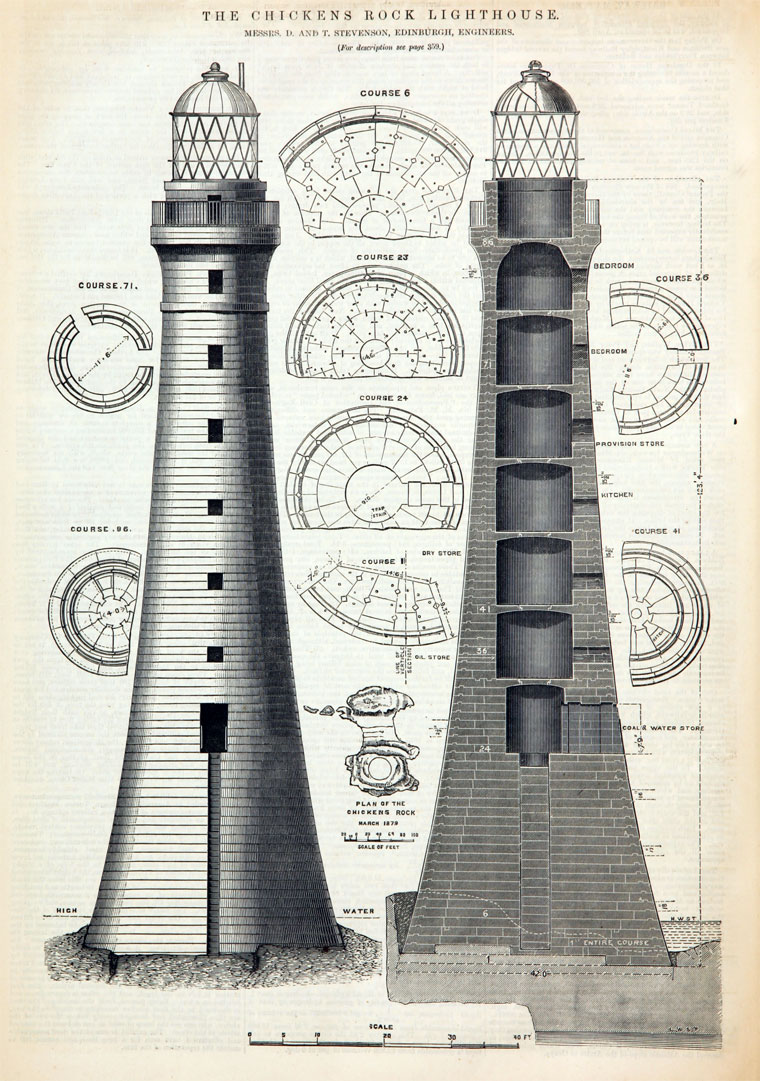 THOMAS STEVENSON, fifth son of the well-known Lighthouse Engineer, Robert Stevenson, M.Inst.C.E., was born at Edinburgh on the 22nd of July, 1818.

He entered his father’s office before he had completed his eighteenth year, and after serving a regular pupilage and superintending the execution of various works, he was taken into partnership by his brothers Alan and David in 1846.

His firm was chiefly engaged in the construction of harbour, dock, river, and lighthouse works. With most rivers and harbours in Scotland, he and his partners were in some way professionally connected, while they were also called upon to design works for the improvement of many rivers and harbours in England and Ireland.

In 1855 Mr. Stevenson was conjoined with his brother David, as Engineers to the Northern Lighthouse Board, and the firm designed and erected 28 lighthouses, two of them - Dhu Heartach and the Chickens Rock - being works of no ordinary difficulty.

Being the junior member of the firm, he was enabled through life to devote a large portion of his time to investigations of various kinds. Thus to the subject of harbour construction, Mr. Stevenson early directed his attention, bestowing special care on ascertaining the forces which have to be met and overcome in the erection of works exposed to heavy seas in deep water. He devoted special attention to ascertaining the force, height, and laws of propagation of sea waves, and their action on artificial structures. The measurement of the force of waves was carried out with some completeness by means of instruments of his own device. The results of his wave-observations, and the laws deduced from them, were given in papers communicated to the Royal Society of Edinburgh, and to the Edinburgh Philosophical Journal, and in his book on 'Harbours.'

In 1852, after a series of experiments, he enunciated the law of the increase of the height of waves in relation to fetch; other experiments led to formulas, involving the relations between the heights of waves, and the various influences which modify them, and also to formulas, by which the reductive power of harbours and breakwaters could be calculated, all of which are of considerable value to the marine engineer. He always held, however, that much remained to be done, especially in ascertaining facts, and he considered his own work in this direction as only an approximation.

About thirty years ago, he wrote the article 'Harbours' for the 'Encyclopaedia Britannica,' which was subsequently published as a separate treatise on 'The design and construction of Harbours,' and it is now in its third edition.

To lighthouse optics, Mr. Stevenson devoted special consideration, and devised many notable improvements, both in catoptric and dioptric apparatus. It may be sufficient to state among other improvements, the holophotal system - the condensing system for fixed, revolving and intermittent lights; the dioptric spherical mirror, and the apparent light.

In designing these improvements, he was ably assisted by Alan Brebner, M.Inst.C.E. For a great many of the Scottish Lighthouses, the optical apparatus is of a novel design to suit the special requirements of their situations, the latest being the condensing flashing apparatus, for the Isle of Nay Electric Light. In his book on 'Lighthouse construction and illumination,' which has passed through three editions, the results of the practice of his firm in lighthouse construction and optics are given. For some of his inventions, laid before the Royal Scottish Society of Arts, Mr. Stevenson was awarded their gold medals.

At the French Exhibition of 1878, his merits as an inventor in lighthouse optics were likewise recognised by a gold medal.

His firm’s advice was taken by the Governments of India, Newfoundland, New Zealand and Japan, and schemes for lighting the whole coasts of the two last countries were devised by them, and are now being carried out.

To meteorology, Mr. Stevenson early devoted his attention. From 1842, when he wrote a paper on 'Defects in Rain Gauges,' his interest in meteorology has never flagged, many papers being written on different branches of the subject. He introduced the use of barometric gradients, as a step towards the numerical measurement of the intensity of storms ; and he devised the useful screen for the protection of exposed meteorological instruments, now in very general use, as it rendered observations made at different places comparable with one another. From the inception of the Scottish Meteorological Society he keenly advocated its interests, and took an active part in all its operations, particularly the establishment of the high-level Observatory at Ben Nevis.

Mr. Stevenson was a devoted member of the Church of Scotland. Under the pseudonym of a 'Layman,'he wrote several pamphlets on religious questions, one of which was reprinted by the late Professor Crawford for the use of his students. He did much in unostentatious charity, all deserving institutions finding in him a warm and generous supporter.

Mr. Stevenson was incapacitated for business for some time previous to his death. He spent last winter at Bournemouth, returning to Edinburgh a fortnight before his death, which took place on the 8th of May, 1887.

As will have been already noticed, Mr. Thomas Stevenson came of a family of engineers, all of them highly distinguished in the profession, and of whom five have been members of the Institution. Both in professional and private life he was greatly esteemed and respected.

He was elected a Fellow of the Royal Society of Edinburgh in 1845, acted as a member of Council, as one of its Vice- Presidents, and in 1885 was elected its President. He was elected a member of the institution on the 2nd of February 1864, and one of his last literary undertakings was the lecture on 'Tides and Coast Works,' read on his behalf on the 16th of April 1885, he being unable from indisposition to be present.

He was a Fellow of the Society of Antiquaries of Scotland, the Geological, and other societies.