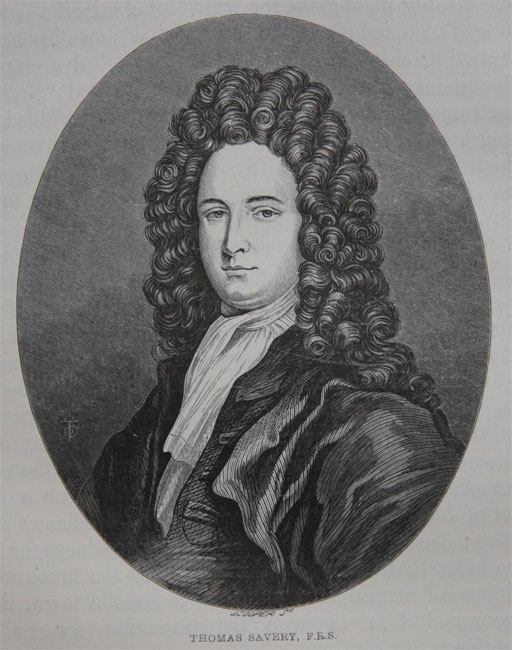 c1650 Born a member of a well known family at Shilstone, Devon. he was one of two sons of Richard Savery and grandson of Christopher Savery of Totnes

He was well educated, and became a military engineer. He exhibited great fondness for mechanics, and for mathematicians natural philosophy and gave much time to experimenting, to the contriving of various kinds of apparatus, and to invention. He constructed a clock, which still remains in the family, and is considered an ingenious piece of mechanism, and is said to be of excellent workmanship.

He invented and patented an arrangement of paddlewheels, driven by a capstan for propelling vessels in calm weather, and spent some time endeavoring to secure its adoption by the British Admiralty and the Wavy Board, but met with no success. Savery then fitted his apparatus into a small vessel, and exhibited its operation on the Thames. The invention was never introduced into the navy.

It was after this time that Savery became the inventor of a steam engine. It is not known whether he was familiar with the work of the Edward Somerset, 2nd Marquis of Worcester, and of earlier inventors. John Theophilus Desaguliers states that he had read the book of Worcester, and that he subsequently endeavoured to destroy all evidence of the anticipation of his own invention by the marquis by buying up all copies of the century that he could find, and burning them. The story is scarcely credible. A comparison of the drawings given of the two engines exhibits, nevertheless, a striking resemblance; and, assuming that of the marquis's engine to be correct, Savery is to be given credit for the finally successful introduction of the "semi-omnipotent" and "water-commanding" engine of Worcester.

1698 The most important advance in actual construction, therefore, was made by Thomas Savery. The constant and embarrassing expense, and the engineering difficulties presented by the necessity of keeping the British mines, and particularly the deep pits of Cornwall, free from water, and the failure of every attempt previously made to provide effective and economical pumping machinery, were noted by Savery, who, July 2, 1698, patented the design of the first engine which was ever actually employed in this work. A working model was submitted to the Royal Society of London.

Done in 1699, and successful experiments were made with it Savery spent a considerable time in planning his engine and in perfecting it, and states that he expended large sums of money upon it. Having finally succeeded in satisfying himself with its operation, he exhibited a model "Fire Engine," as it was called in those days, before King William III and his court, at Hampton Court, in 1698, and obtained his patent without delay.

Although there were other difficulties in the application of the Savery engine to many kinds of work, this was the most serious one, and explosions did occur with fatal results. The writer just quoted relates, in his "Experimental Philosophy;" that a man who was ignorant of the nature of the engine undertook to work a machine which Desaguliers had provided with a safety valve to avoid this very danger, "and, having hung the weight at the further end of the steelyard, in order to collect more steam in order to make his work the quicker, he hung also a very heavy plumber's iron upon the end of the steelyard; the consequence proved fatal; for, after some time, the steam, not being able, with the safety cock, to raise up the steelyard loaded with all this unusual weight, burst the boiler with a great explosion, and killed the poor man." This is probably the earliest record of a steam boiler explosion.

Savery proposed to use his engine for driving mills; but there is no evidence that he actually made such an application of the machine, although it was afterward so applied by others. The engine was not well adapted to the drainage of surface land, as the elevation of large quantities of water through small heights required great capacity of receivers, or compelled the use of several engines for each case. The filling of the receivers, in such cases, also compelled the heating of large areas of cold and wet metallic surfaces by the steam at each operation, and thus made the work comparatively wasteful of fuel. Where used in mines, they were necessarily placed within 30 feet or less of the lowest level, and were therefore exposed to danger of submergence whenever, by any accident, the water should rise above that level. In many cases this would result in the loss of the engine, and the mine would remain "drowned," unless another engine should be procured to pump it out. Where the mine was deep, the water was forced by the pressure of steam from the level of the engine station to the top of the lift. This compelled the use of pressures of several atmospheres in many cases; and a pressure of three atmospheres, or about 40 pounds per square inch, was considered, in those days, as about the maximum pressure allowable. This difficulty was met by setting a separate engine at every 60 or 80 feet, and pumping the water from one to the other. If any one engine in the set became disabled, the pumping was interrupted until that one machine could be repaired.

The size of Savery's largest boilers was not great, their maximum diameter not exceeding two and a half feet. This made it necessary to provide several of his engines, usually, for a single mine, and at each level. The first cost and the expense of repairs were exceedingly serious items. The expense and danger, either real or apparent, were thus sufficient to deter many from their use, and the old method of raising water by horse power was adhered to.

The consumption of fuel with these engines was very great. The steam was not generated economically, as the boilers used were of such simple forms as only could then be produced, and presented too little heating surface to secure a very complete transfer of heat from the gases of combustion to the water within the boiler This waste in the generation of steam in these uneconomical boilers was followed by still more serious waste in its application, without expansion, to the expulsion of water from a metallic receiver, the cold and wet sides of which absorbed heat with the greatest avidity The great mass of the liquid was not, however, heated by the steam, and was expelled at the temperature at which it was raised from below Savery quaintly relates the action of his machine in "The Miner's Friend," and so exactly, that a better description could scarcely be asked;

"The steam acts upon the surface of the water in the receiver, which surface only being heated by the steam, it does not condense, but the steam gravitates or presses with an elastic quality like air, and still increasing its elasticity or spring, until it counterpoises, or rather exceeds, the weight of the column of water in the force pipe, which then it will necessarily drive up that pipe; the steam then takes some time to recover its power, but it will at last discharge the water out at the top of the pipe You may see on the outside of the receiver how the water goes out, as well as if it were transparent; for, so far as the steam is contained within the vessel, it is dry without, and so hot as scarcely to endure the least touch of the hand; but so far as the water is inside the vessel, it will be cold and wet on the outside, where any water has fallen on it; which cold and moisture vanish as fast as the steam takes the place of the water in its descent."

1716 After Savery's death several of these engines were erected in which some improvements were introduced.

A Savery engine was for many years employed in Mr Kier's manufactory at St. Pancras [1]