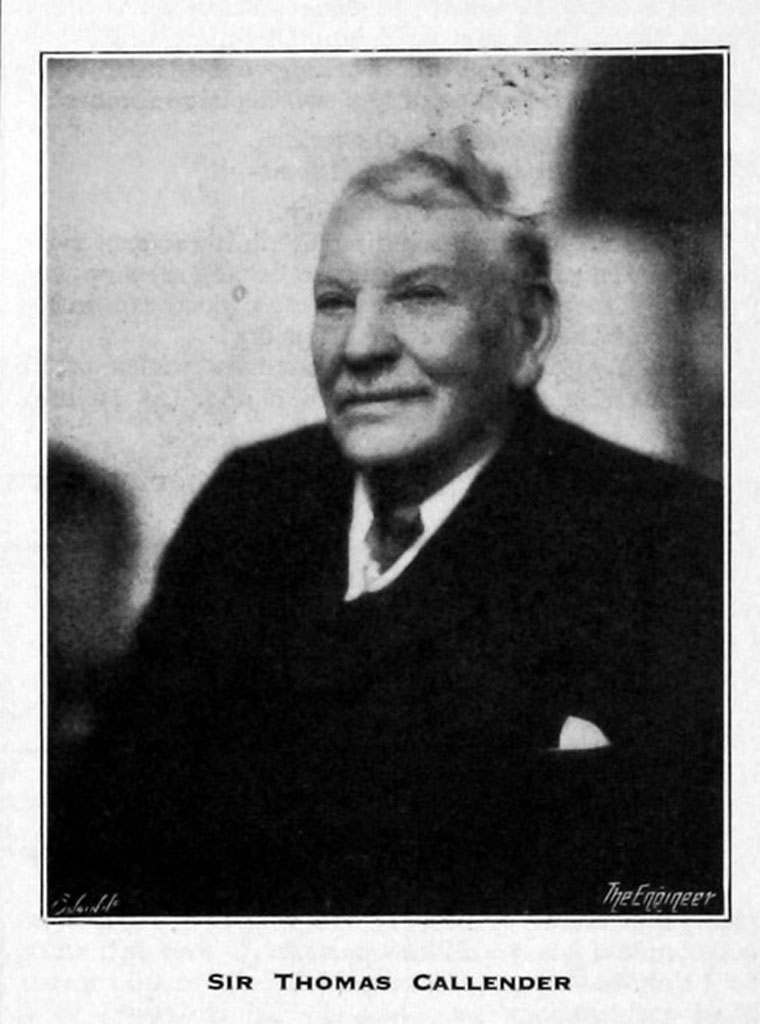 1855 Born on 9 April at Clydeview, Partick, Lanarkshire, Scotland, the eldest of the ten children of William Ormiston Callender, a commission merchant, and his wife, Jean, née Marshall, the daughter of a Greenock tanner.

1859 the family moved to Hammersmith, London.

Thomas was sent to school in Boulogne

1870 Returned to London to continue his education.

1870 William visited the asphalt deposits at Val de Travers, Switzerland; on his return, he set up Callender and Amos to act as agents for the Val de Travers Company of Neuchâtel to import asphalt for the many road-making schemes that were taking place in the City of London.

1877 William Callender obtained an interest in the import of bitumen from Trinidad for road-making and other waterproofing purposes. Took his two eldest sons, Thomas and William, into business as Callender and Sons, refiners of bitumen and for asphalt paving. Offices at 150 Leadenhall Street, London, with a small refinery at Millwall, where the bitumen was landed.

Thomas then arranged that all impurities be eliminated at source, which reduced costs.

1880 Thomas saw the opera house in St Petersburg was lit by Jablochoff candles. To exploit the developing market for electric lighting, Callender decided to turn the business towards the production of large-capacity insulated cables.

Tests on the production of insulated wire began at their new factory at Erith, Kent.

1882 Callender's Bitumen Telegraph and Waterproof Company was formed to finance the development of vulcanized bitumen.

Secured the services of Sir Samuel Canning of the Telegraph Construction and Maintenance Co.

Early 1880s Thomas invented the Callender solid system where cables were laid in wooden troughs and embedded in bitumen.

The management of the Erith works became Thomas's responsibility. Cables were supplied for the electric lighting of the new law courts in the Strand and for the Covent Garden Opera House in 1883, as well as mains cables for the growing number of electricity supply companies.

1891 the firm introduced an underground electric haulage system at the Abercannaid colliery, Merthyr, and in the same year received its first tramways order, which was soon followed by the first electrified underground railway.

1896 Callender's Cable and Construction Company. With Callender as managing director (a position he held until his death), the company was well placed to profit from the huge expansion in the uses of electricity.

1904 the first of a number of major cabling projects was undertaken in India, for electricity supply and tramways. India was to become one of Callenders' most important markets; Thomas maintained personal contact with important operations wherever possible; he proposed setting up permanent headquarters in India.

c.1902 At home the company undertook the electrification of London's metropolitan tramways, a seven-year scheme, which was completed in 1909.

1913 The General Post Office placed the first of many large orders for telephone cables.

1930 he began discussions with the directors of British Insulated Cables on prospects for closer co-operation between the two companies.

Was a member of the Institution of Electrical Engineers, and a director of a number of power companies.

1938 Callender died at his home, Bidborough Court, near Tunbridge Wells, on 2 December

Thomas Octavius Callender was born at Glasgow in 1855 and, on completing his education, joined his father, Mr. W. O. Callender, in founding the firm of Callender and Sons, whose chief interest lay in bitumen. The use of this substance as an electrical insulation medium was developed, and another company formed for the manufacture of insulated wires and cables, which in 1896 was reorganized as Callender's Cable and Construction Company. Thomas Callender was managing director of this firm from its foundation to his death. The firm was responsible for laying the cables for lighting the Law Courts—the first important building in London to be lighted by electricity. The wiring of the Taj Mahal was another installation which it carried out.

Callender was also associated with the introduction of electric haulage in coal mines and with the laying of cables for the first electric railway in the country, that from London Bridge to Stockwell, though his interests were more on the administrative and business sides than on the technical side of the company. He was knighted in 1918. He travelled extensively and did much to extend the foreign connections of his company.

He was a director of a number of electric supply and manufacturing companies both in this country and abroad, and was Senior Warden of the Electrical Industries Benevolent Association.

Sir Thomas was elected a member of the Institute of Metals on September 10, 1929.