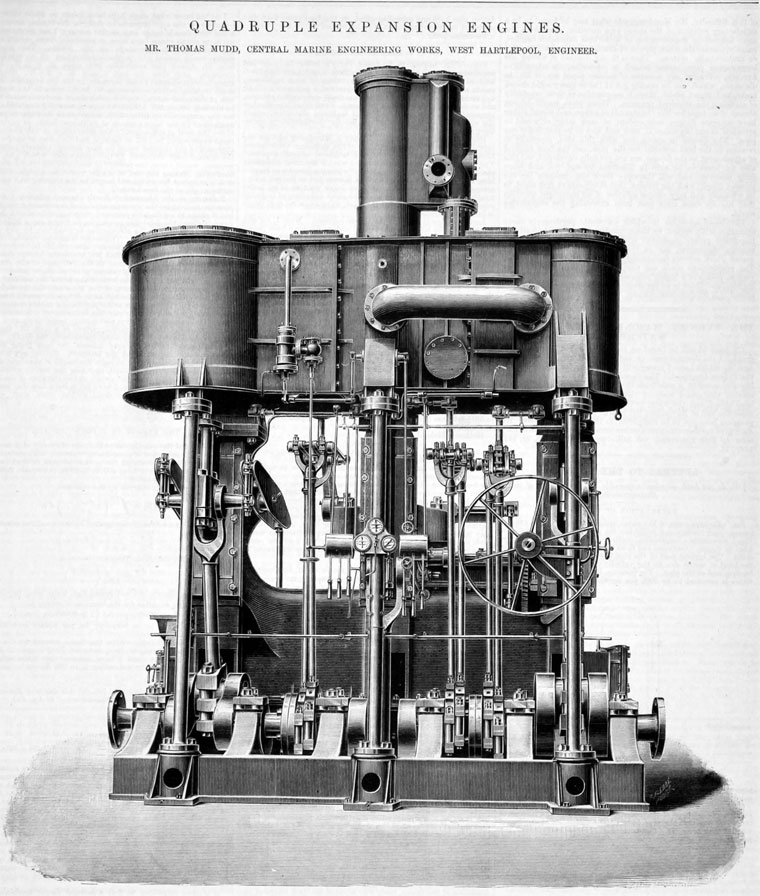 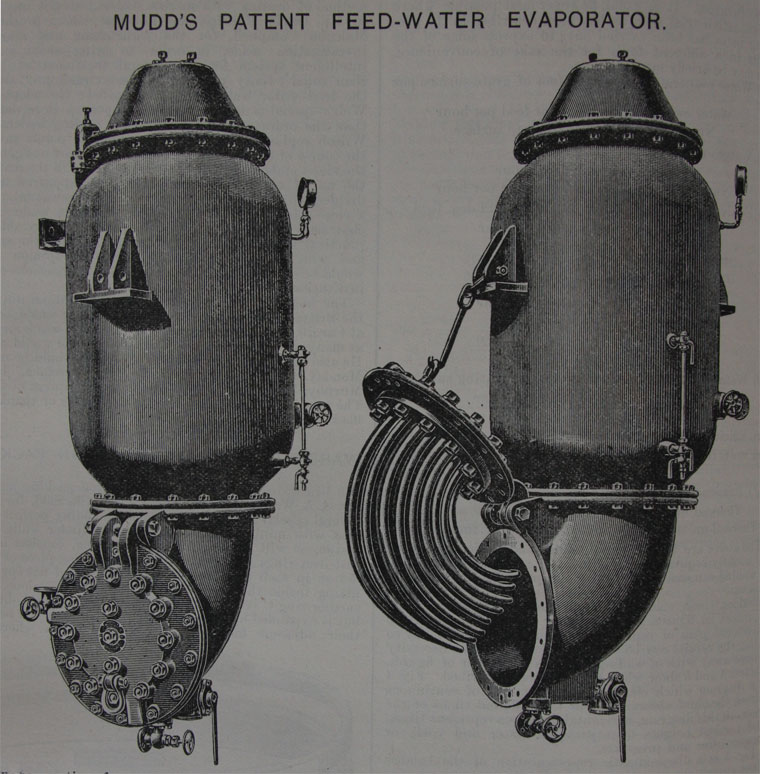 From ‘1892 The Practical Engineer’ 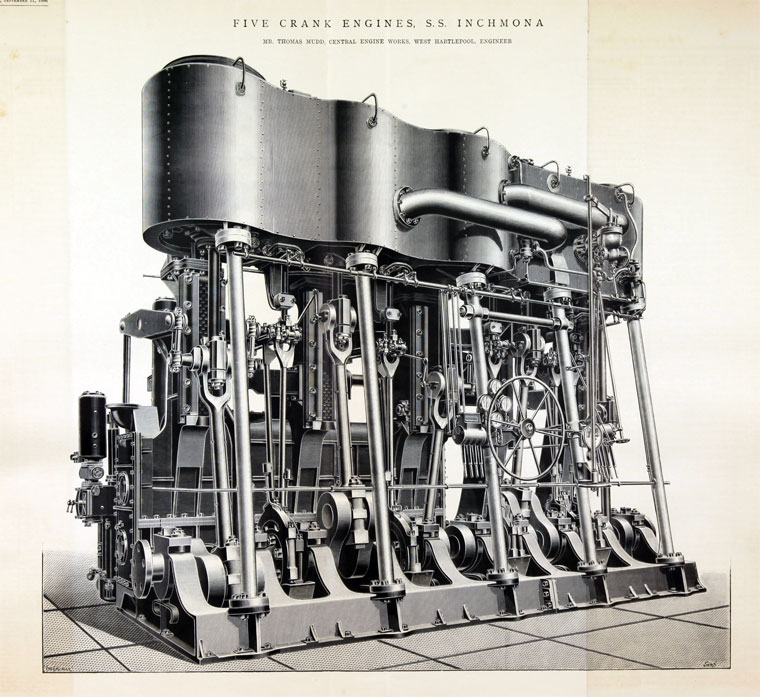 THOMAS MUDD was born at Kirby Fleetham near Bedale in Yorkshire, on 15th April 1852.

After being educated at West Hartlepool he was apprenticed in 1868 at the age of sixteen at the Darlington Forge, and in 1872 entered the employment of Messrs. Thomas Richardson and Sons, Hartlepool Engine Works, Hartlepool, as a draughtsman.

In 1883 he was engaged by the late Sir William Gray to design, erect, and manage his new Central Marine Engine Works at West Hartlepool. The principal constructional features of these works, covering about eight acres of what had previously been little better than a swamp, and employing about 1,800 persons, were described and illustrated in a paper he read before the North-East Coast Institution of Engineers and Shipbuilders in 1887 (vol. 3, page 55), on the construction of marine-engine works.

The first engine built here was on the triple-expansion principle, and was completed in October 1885; the majority of the engines turned out have the high-pressure cylinder placed between the other two, with a view to economy of steam.

In the manufacture of marine boilers he introduced the plan of welding and flanging the cylindrical shell plates, and fitting thereto flat end plates, which are also welded at the corners of their seams, thereby obviating entirely the joggling of one plate over another. Other advantages of this method were described in a paper he read before the Institution of Naval Architects in 1891 (vol. 32, page 212), on some details in marine engineering. The high economy of fuel realised with these boilers and engines was illustrated by the trials of the s.s. "Iona," carried out by Professor Kennedy for the Research Committee of this Institution (Proceedings 1891, page 200), in which he took an important part, contributing materially to their interest and success.

On the occasion of the summer meeting of the Institution in Middlesbrough in 1893 he organized the visit thence paid to the Hartlepools, the enjoyment of which was largely enhanced by the admirable description of the local industries, prepared by himself for the guidance of the members (Proceedings 1893, pages 372-380).

In 1887, when the Central Marine Engine Works were turned into a company, he became one of the seven members forming the partnership; and in 1894 was elected a director.

In 1896 he brought out the five-crank quadruple-expansion engines, which were first fitted in that year in the s.s. "Inchmona," with the result that the average consumption of coal during the first year's sea service did not exceed 1.15 lb. per indicated horse-power per hour; in these engines all five cylinders excepting the high-pressure were jacketed with steam considerably above their respective initial pressures.

He became a Member of this Institution in 1885, and was elected a Member of Council in 1896; the last occasion of his taking part in a discussion was at the autumn meeting in 1897 (Proceedings, page 487-9), when he gave his views on ventilating fans, and on the question of negative slip and the effect of the rounded backs of propeller blades. He was also a Member of the Institution of Civil Engineers, the Institution of Naval Architects, the Iron and Steel Institute, the Cleveland Institution of Engineers, and the North-East Coast Institution of Engineers and Shipbuilders. Having entered the town council of Hartlepool in 1889, he was elected Mayor in 1895, and re-elected in 1896, and a third time in 1897; and in 1897 was placed on the commission of the peace.

His death took place on 17th May 1898, from a chill caught about a week previously, at the age of forty-six. His remains were cremated at Manchester.

"...sincere regret we announce the death of Mr. Thomas Mudd, on Tuesday night, at his residence, Moore-terrace, Hartlepool, after a short illness. Mr. Mudd was managing director of the Central Engine Works, West Hartlepool. Mr. Mudd was an exceptionally able mechanical engineer. He possessed the facility, all too rare, of appreciating, not only tho value of an idea, but of the conditions which make for success or failure in carrying that idea into practice'. While, on the one hand, he did nothing rashly, on the other, he was one of t he most advanced men of the day. In his practice he was often a little in front of other engineers not much, but just enough. If 160 lb. pressure gave good results and became a standard, Mr. Mudd would go to 180 lb. There is reason..." More.

THOMAS MUDD died at Hartlepool on May 24, 1898, at the age of forty-six. He was a director of the firm of W. Gray & Co. Ltd., and manager of that Company's well-known Central Marine Engineering Works at Hartlepool.

He was a Yorkshireman, having been born at Kirby Fleetham in 1852, and was educated at West Hartlepool. He began his engineering career by being apprenticed to the Darlington Forge Company at the age of sixteen.

In 1872 he entered the employment of Messrs. Richardson & Son, and ten years later he was engaged by Mr. (now Sir William) Gray to design the Central Marine Engineering Works, which were laid out in 1884, and managed by him from the beginning.

In 1887 he read before the North-East Coast Institution of Engineers and Shipbuilders a paper on the "Plan and Construction of Marine Engine Works," in which he described his works at Hartlepool. In addition to being an accomplished engineer, he was also a good citizen, and never spared time or labour in carrying out the duties of his position, to some extent thrust upon him. At the time of his death he was serving his third year of office as Mayor of Hartlepool.