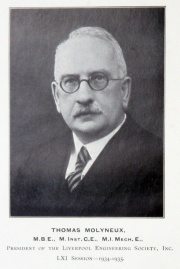 1913 Elected President of the Institute of Water Engineers

"THOMAS MOLYNEUX, M.B.E., whose death occurred on 28th January 1949, at the age of seventy-five, was a former city engineer of Liverpool.

He was educated at Manchester University, and after a period as resident engineer in Mid-Wales for a firm of consulting engineers, entered the service of the Corporation of Liverpool, as assistant engineer, in 1899, and was first employed on tramway construction. Subsequently he became chief mechanical and general engineering assistant, and in 1926 was appointed deputy city engineer. He was promoted to be city engineer in 1930, and held that appointment until his retirement seven years later.

He played an important part in the construction of nearly fifty miles of new arterial roads in the city, and the laying of 170 miles of tramway track. He was also largely responsible for the construction of the great northern outfall sewer, and during his period of office as city engineer considerable progress was made with the Otterspool embankment and promenade scheme. For his services in connection with munition work during the war of 1914-18 he was awarded the M.B.E. Mr. Molyneux had been a Member of the Institution since 1913. He was also a Member of the Institution of Civil Engineers and a Past-President of the Liverpool Engineering Society."