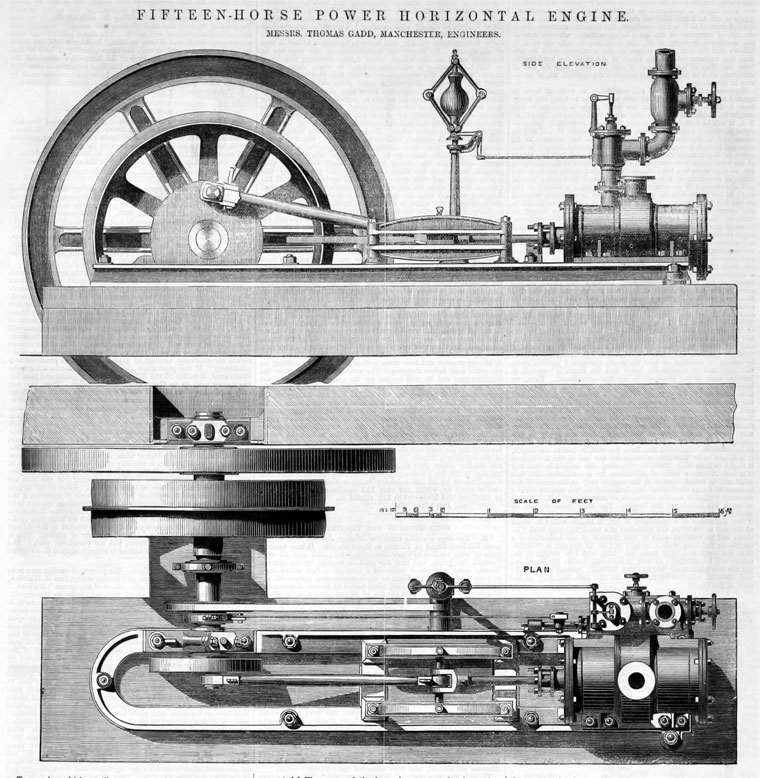 1841 A Thomas Gadd is listed as a mechanic, mechanic, Edge Place, Salford [1]

1845 Advertisement (see illustration) for Thomas Gadd, 32 Mosley Street, Manchester, machinist and mechanical tool maker, engraving, shading and eccentric machines, mill gearing, hydraulic and screw presses, screws and wheels cut to any pitch. The drawing shows the building to have five storeys above the canal towpath level. Canal access was highly desirable for transporting products via the canal network, or via the River Irwell. The illustration shows how goods could also be hoisted to any of the upper four floors directly from Lower Mosley Street.

The 1849 60-inch O.S. map identifies the premises as a cotton mill. Evidently Gadd had taken over the northern wing. Alongside was the Manchester and Salford Junction Canal, which went westward (via a tunnel) to join the River Irwell, and eastward to join the Rochdale Canal. To the west of this mill was Dacca Mill, visible in the background in the 1845 advertisement. This was owned by Wilson Crewdson of the (Dacca Twist Co).

c.1850 Demonstration model of a four colour textile printing machine and a sample of cloth printed on the machine are on display in the Musee des Arts et Metiers in Paris (Inv. Nos. 6869-1 & 2).

1876 Exhibited an eight colour textile printing machine with steam engine, and a printing roller engraving machine at the 1876 US International Exhibition. Commended for great excellence in design, arrangement, and construction, fitness for the purpose intended, economy, and adaptation the public wants. [5]

1884 Partnership of George William Gadd and Edward T Gadd dissolved by mutual consent. Business to be carried on by G. W. Gadd [7]

1891 Advertisement: 'THOMAS GADD, REGENT IRON WORKS, SALFORD, MANCHESTER. Calico Printers, Bleachers, &c, &c, of the city and district are hereby respectfully informed that the old established business of THOMAS GADD. REGENT IRON WORKS, SALFORD, MANCHESTER, is now being conducted under new and experienced management and with productive powers which may at times of urgency be greatly increased by the available resources of the adjoining engineering works of Messrs. Hulse and Co. Orders for Printing Machine, Hydraulic Presses, Cranes, Steam Engines. Mill Gearing, Shafting, etc, will be promptly and economically executed.'[8]

1894 Advertisement: 'On WEDNESDAY and THURSDAY NEXT. To Engineers, Machinists, Ironfounders, Brokers, and Others. in consequence of removal of the business hitherto carried on by Mr. Thomas Gadd, REGENT IRONWORKS, SALFORD, WHEATLEY KIRK, PRICE, and GOULTY are instructed to Sell by Public Auction, on Wednesday and Thursday, the 14th and 15th November, 1894. commencing each day at eleven o'clock prompt, the whole of the valuable PLANT, MACHINERY, LOOSE TOOLS, and UTENSILS in and upon the above-named works. The catalogue will include slide, surfacing. and screw-cutting lathes, 7in. to 17in. centres, on beds 9ft, to 30ft, long; 12 hand lathes, 3in. to 12in. centres, and one l2in., break lathe; 8 vertical drills, 2in. To 2½ in. spindles; 2 radial drills, 4ft. 6in. and 6ft. 6in. arms; five planing machines, to plane from 5ft. 6in. to 14ft. long and from 2ft. to 4ft. wide; 5 slotting machines, 7in., 12in., and 13in. stroke; wheel-cutting and tooth-cleaning machines, "Carter's" patent cold iron saw, grinding machines, hollow-spindle bar-cutting machine, fans, 2 cupolas. stages and foundry plane, two 13-ton hand-power overhead travellers, crabs. 18in. horizontal steam engine, 8in. vertical ditto, set of copper drying cylinders, large quantity of turners', fitters' and smiths' tools; Wrought and cast iron scrap, office furniture. &c. The machine tools are by Whitworth, Hulse. Collier, Gadd and Hill, &c. Catalogues can be obtained on application to the Auctioneers. Albert-square, Manchester, and 48. Queen Victoria-street, London, E.C, Telegrams, "Indicator," Manchester.' [9]

c.1895 Business taken over by the neighbouring machine tool and textile machinery maker Hulse and Co