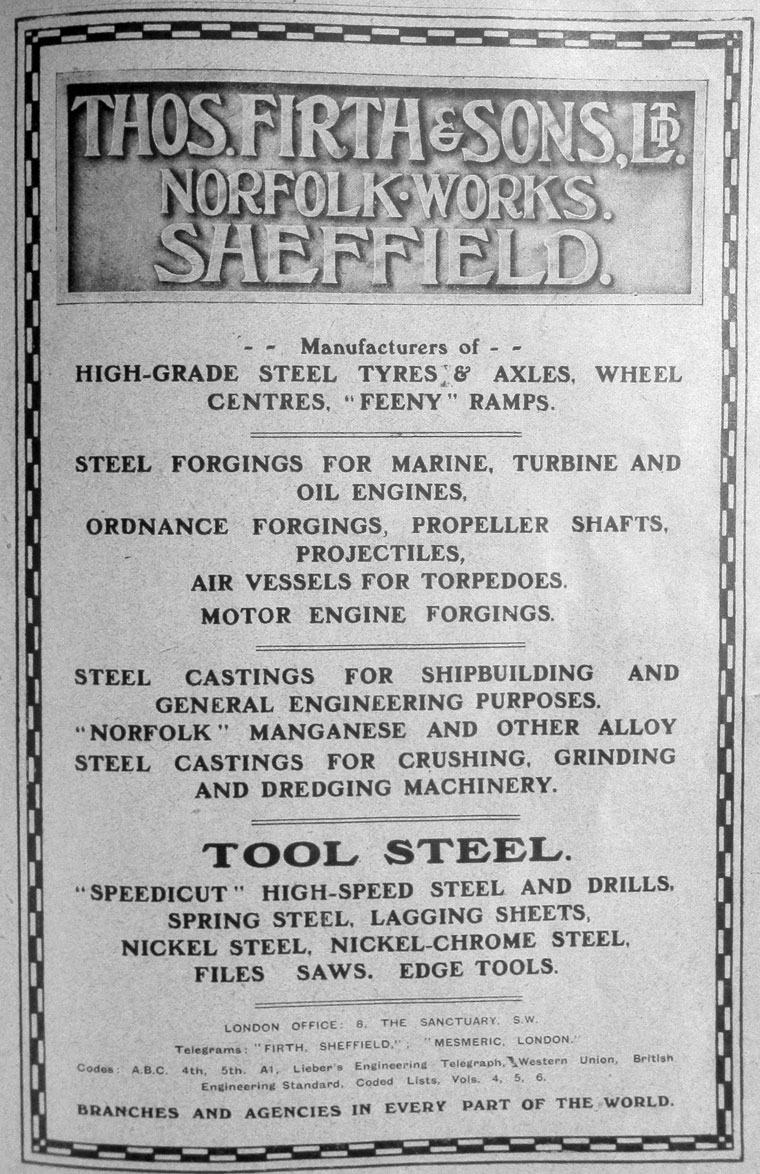 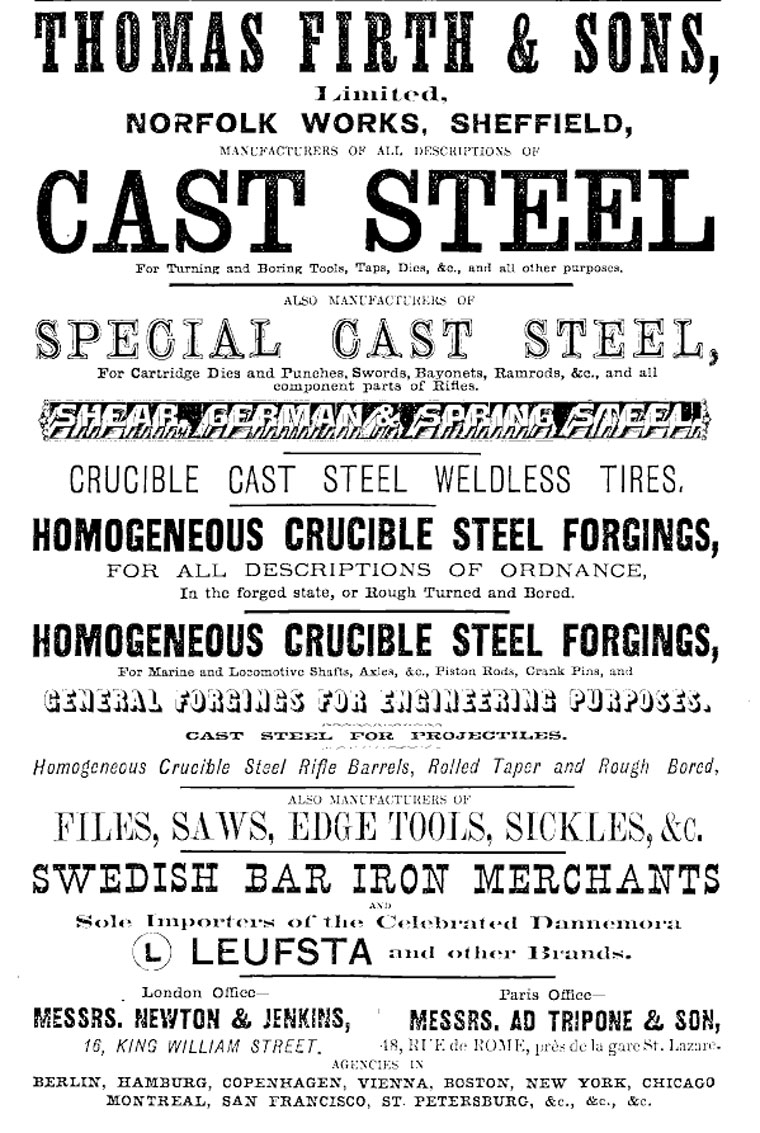 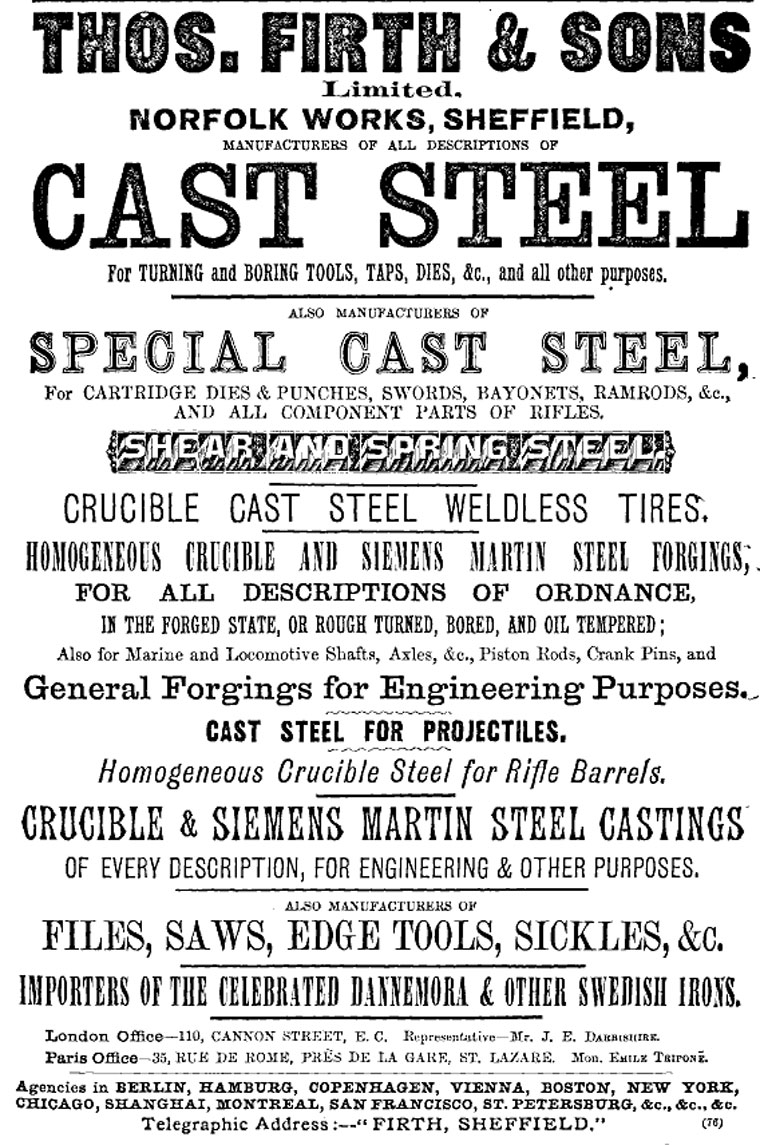 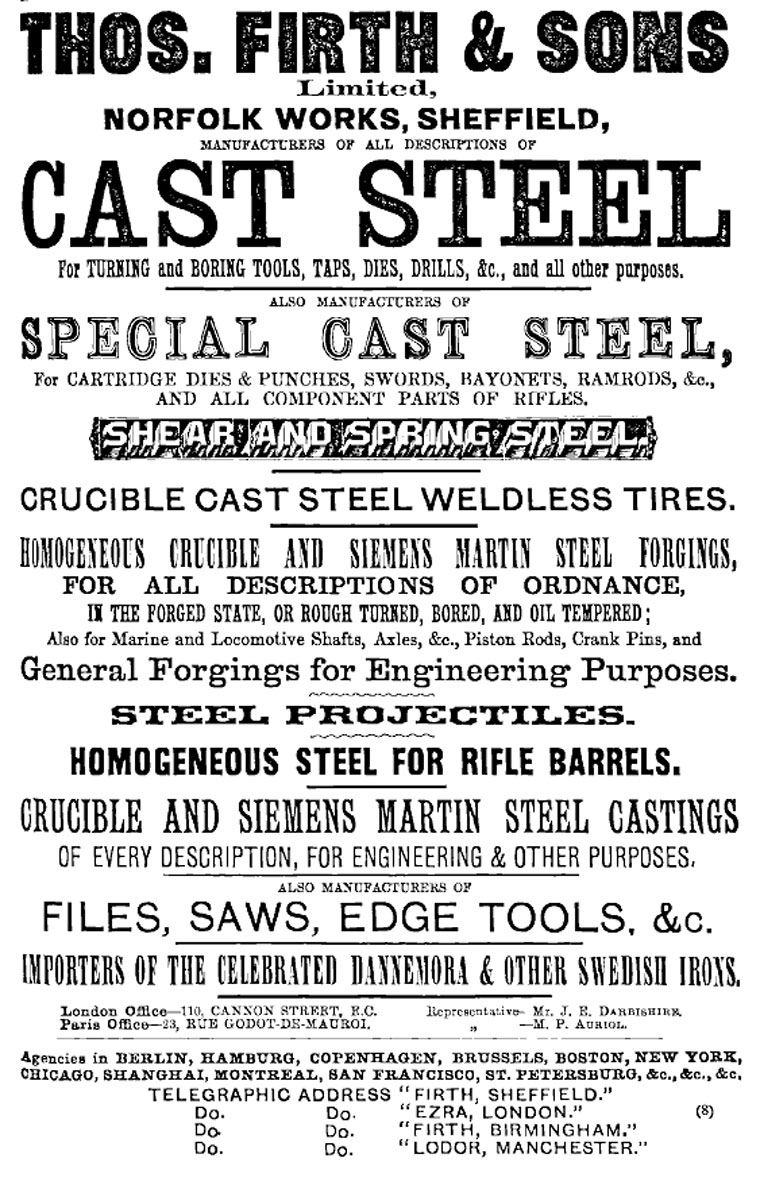 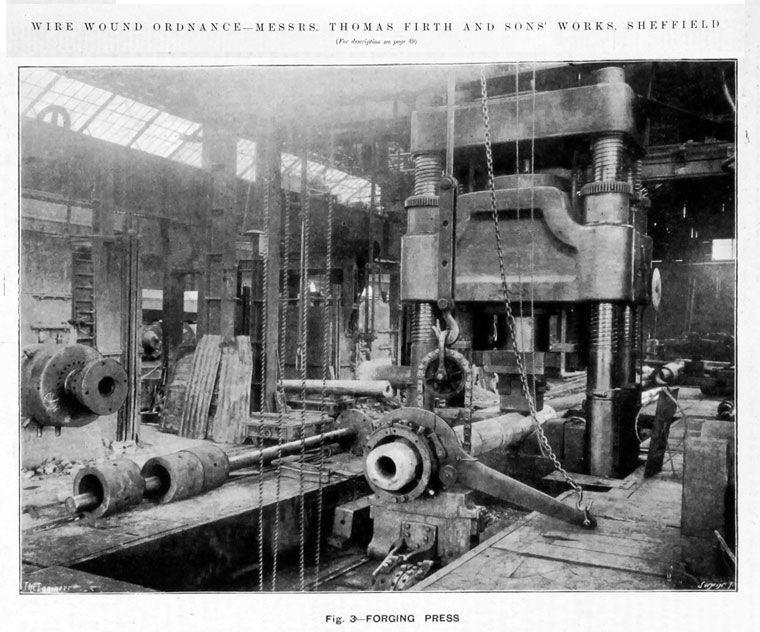 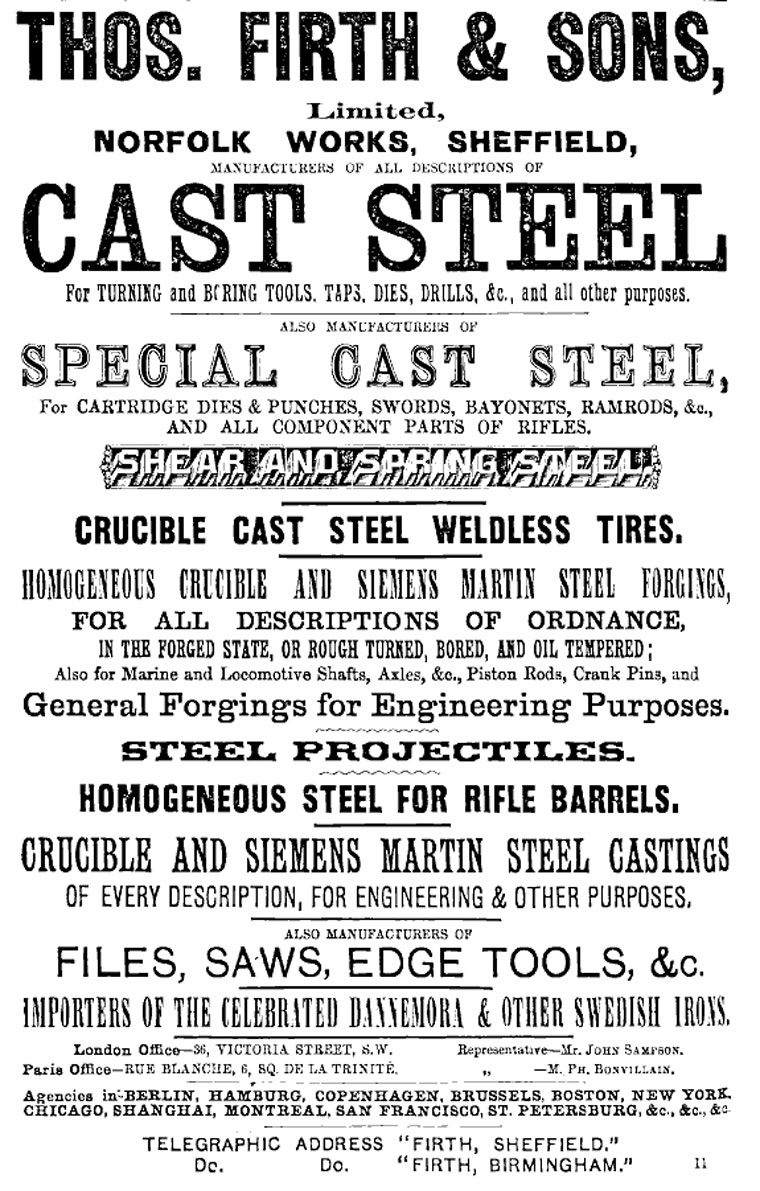 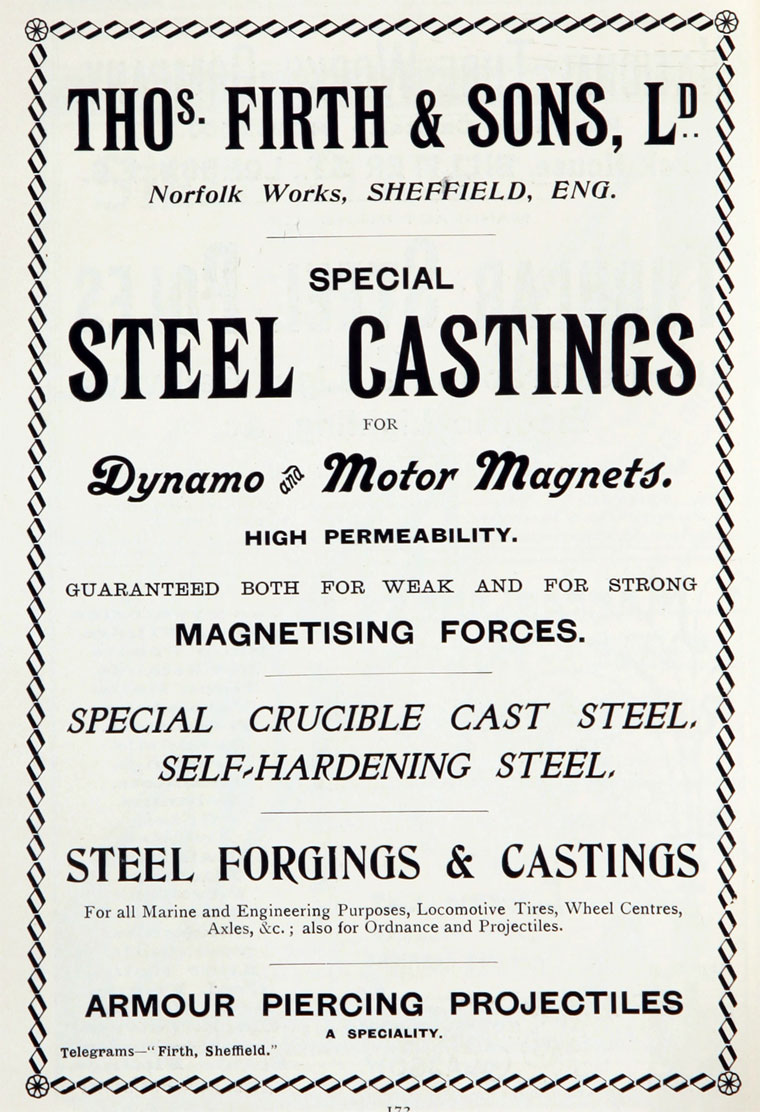 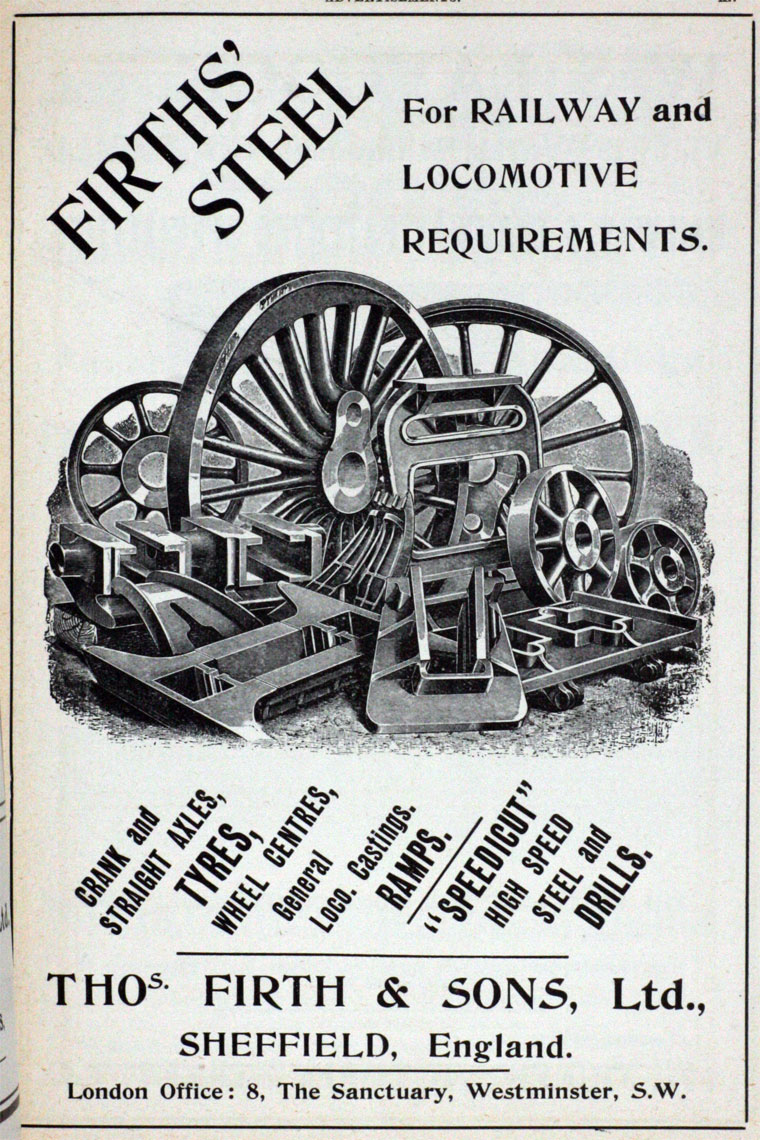 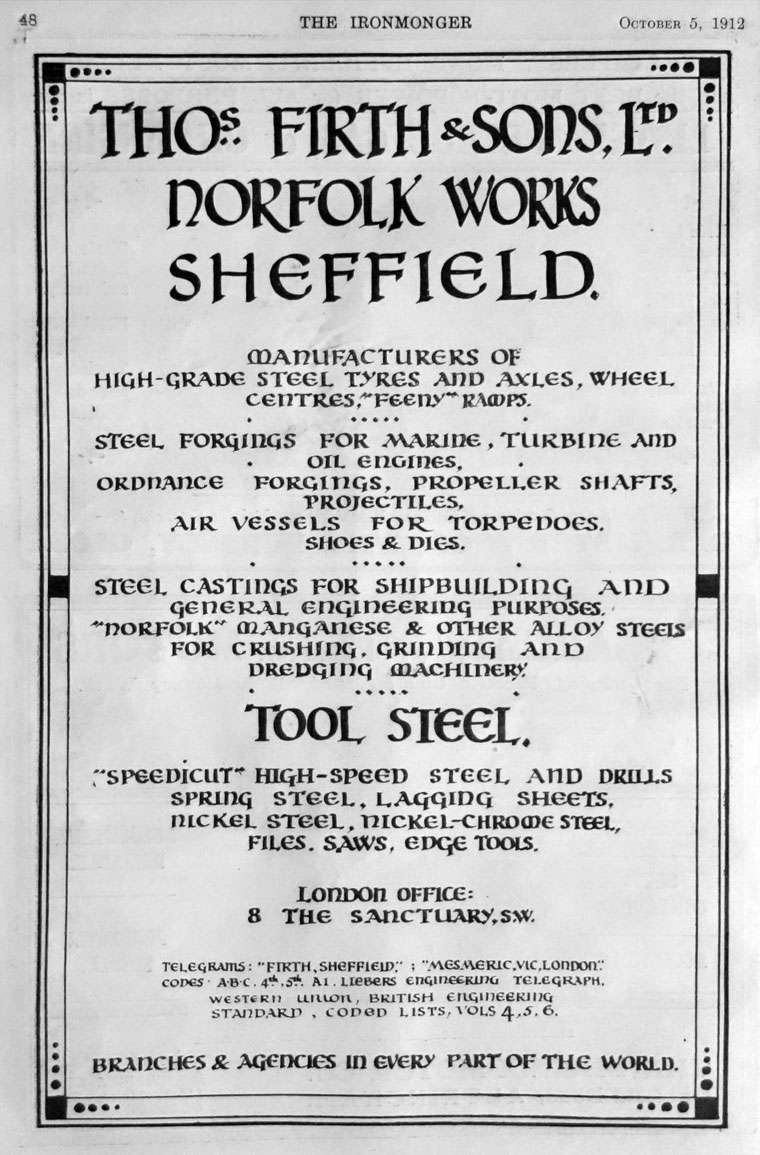 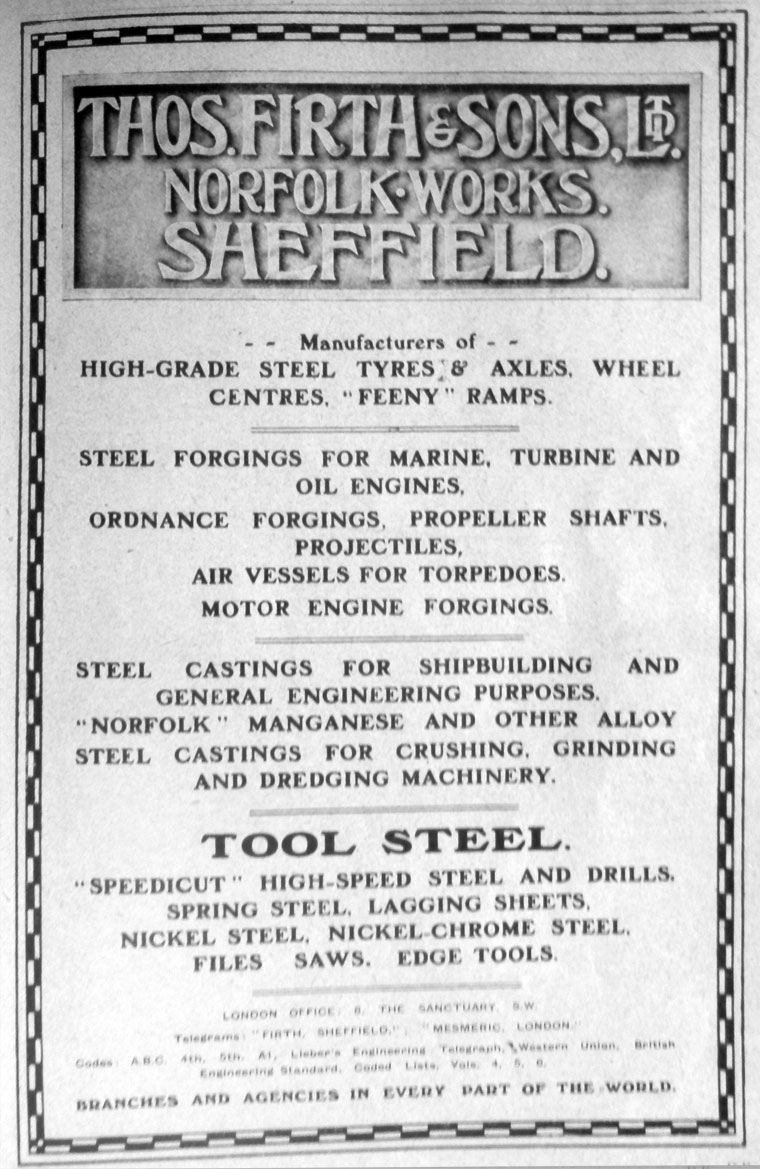 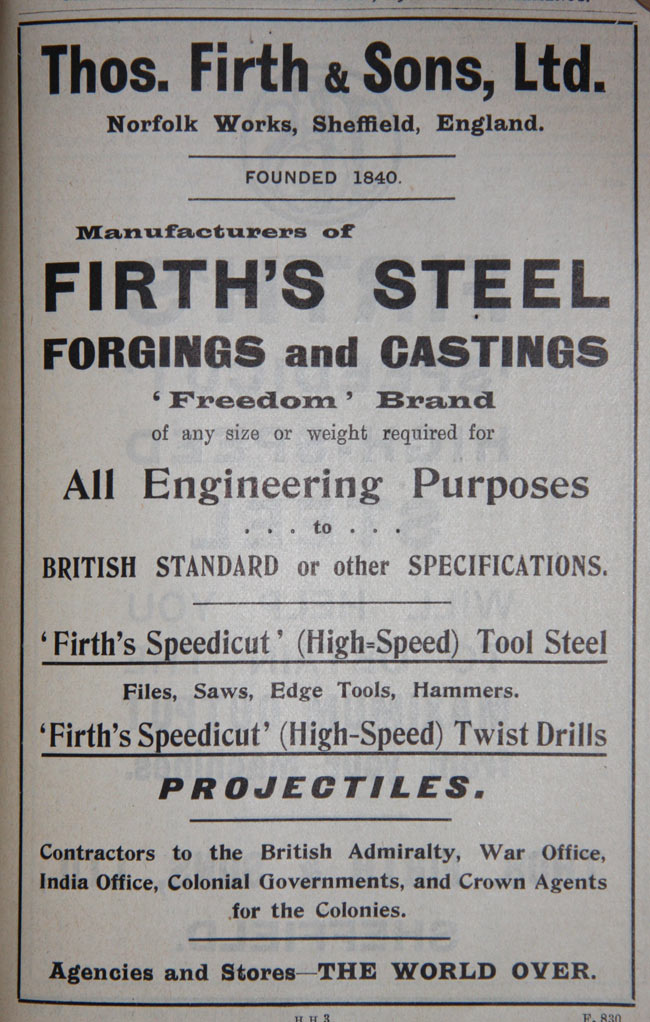 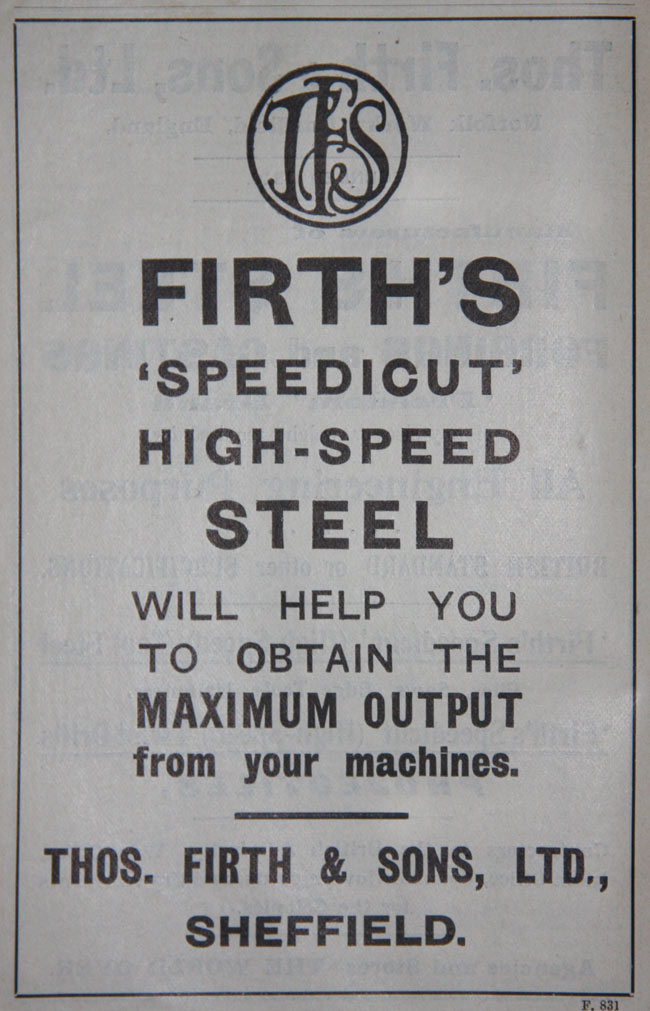 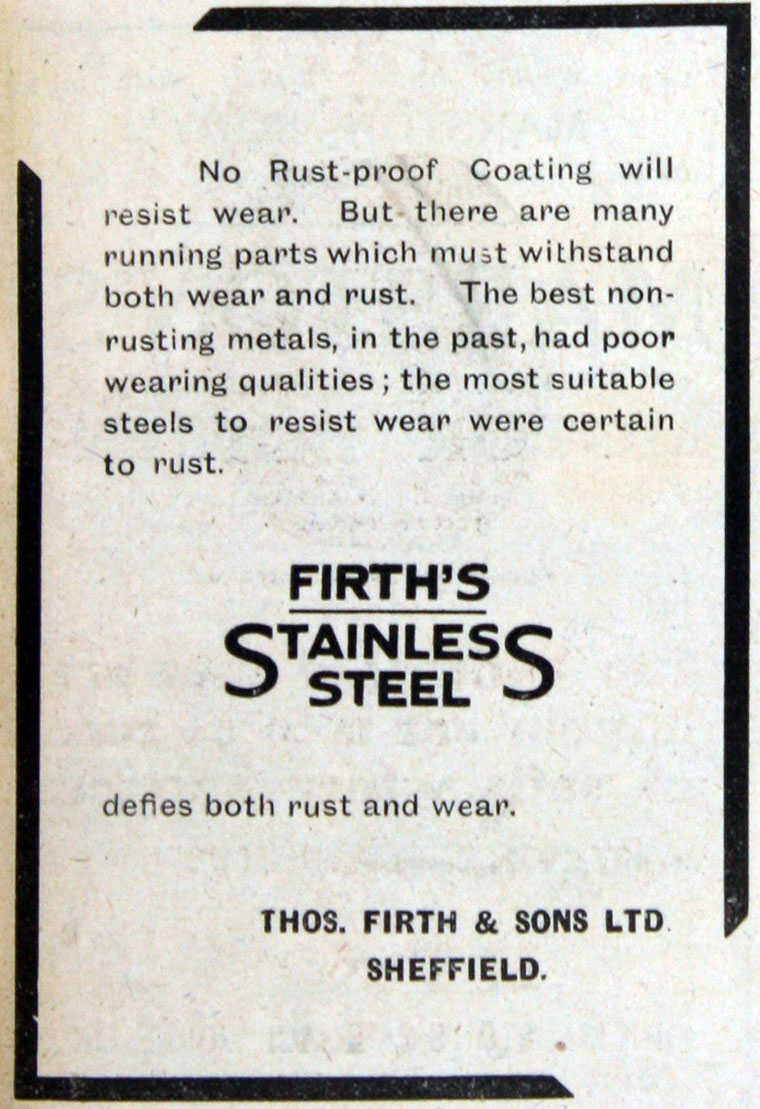 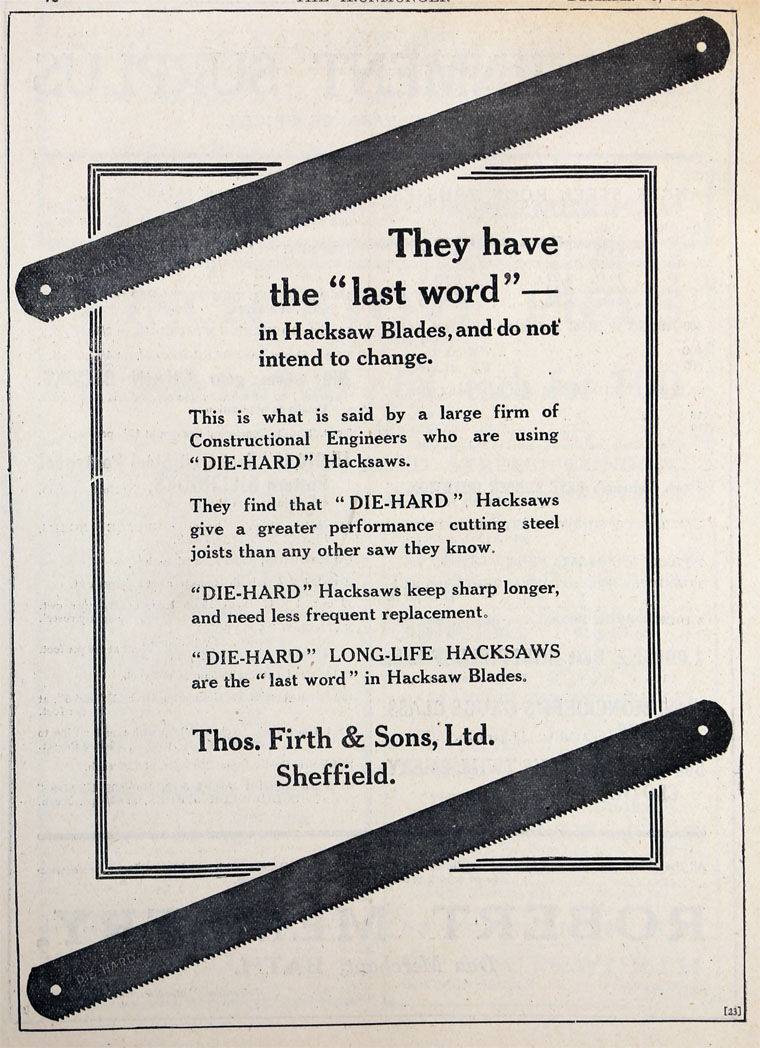 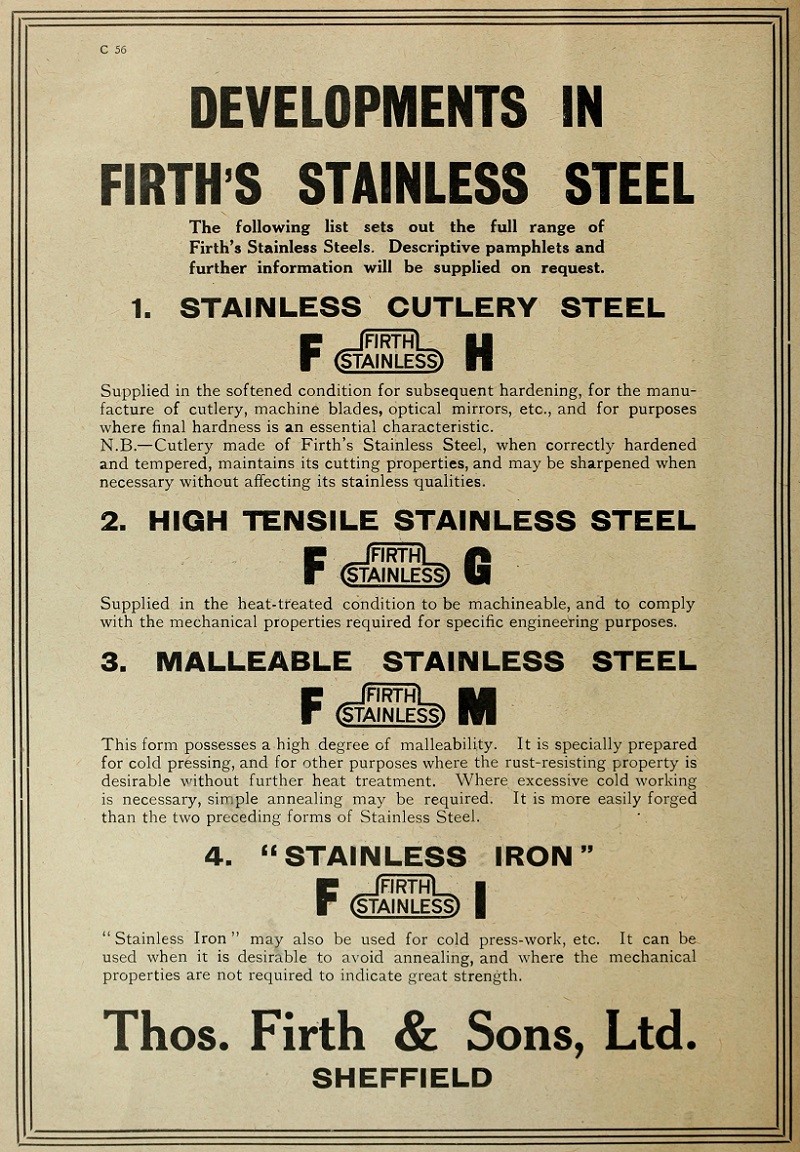 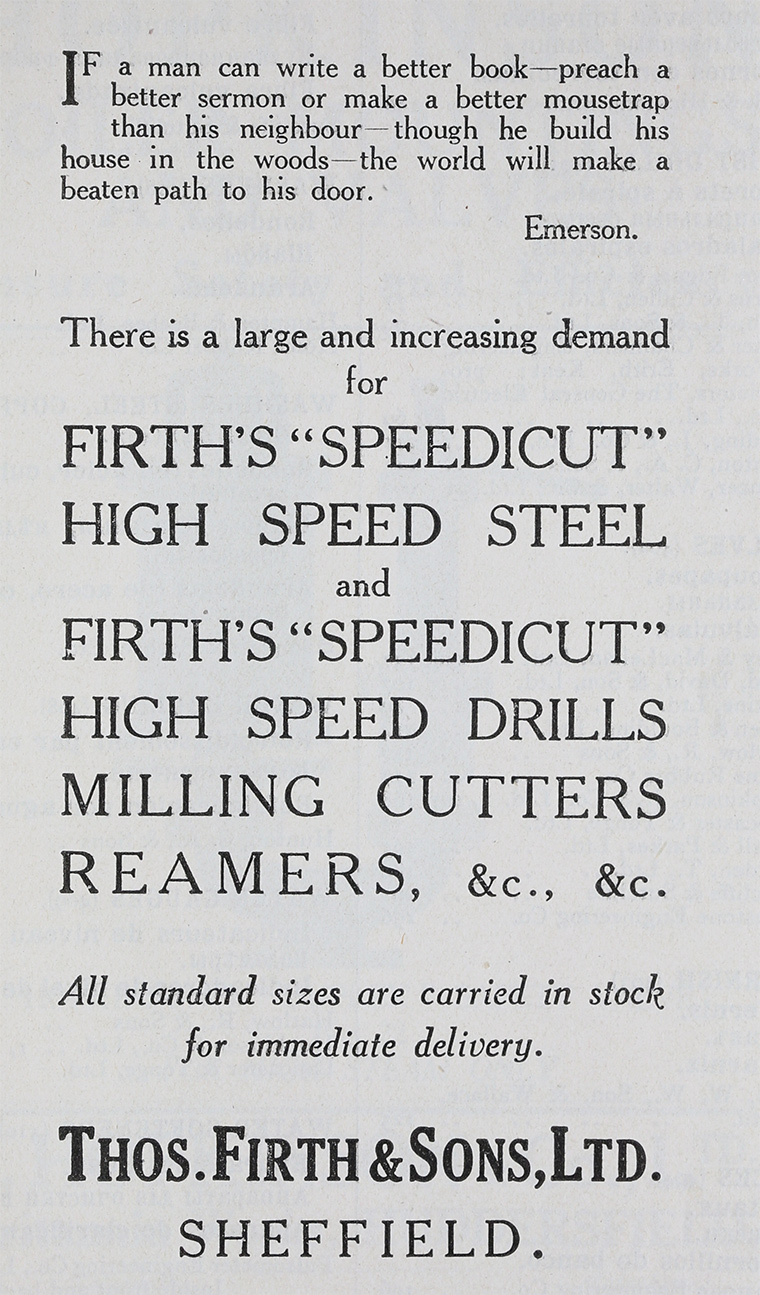 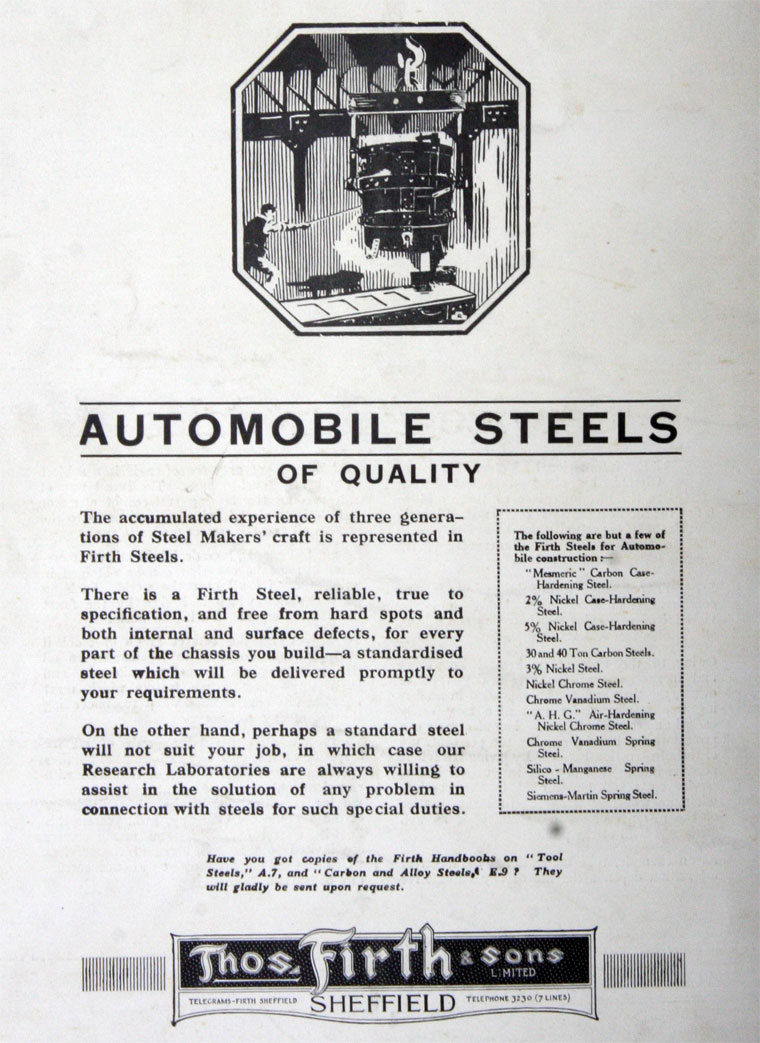 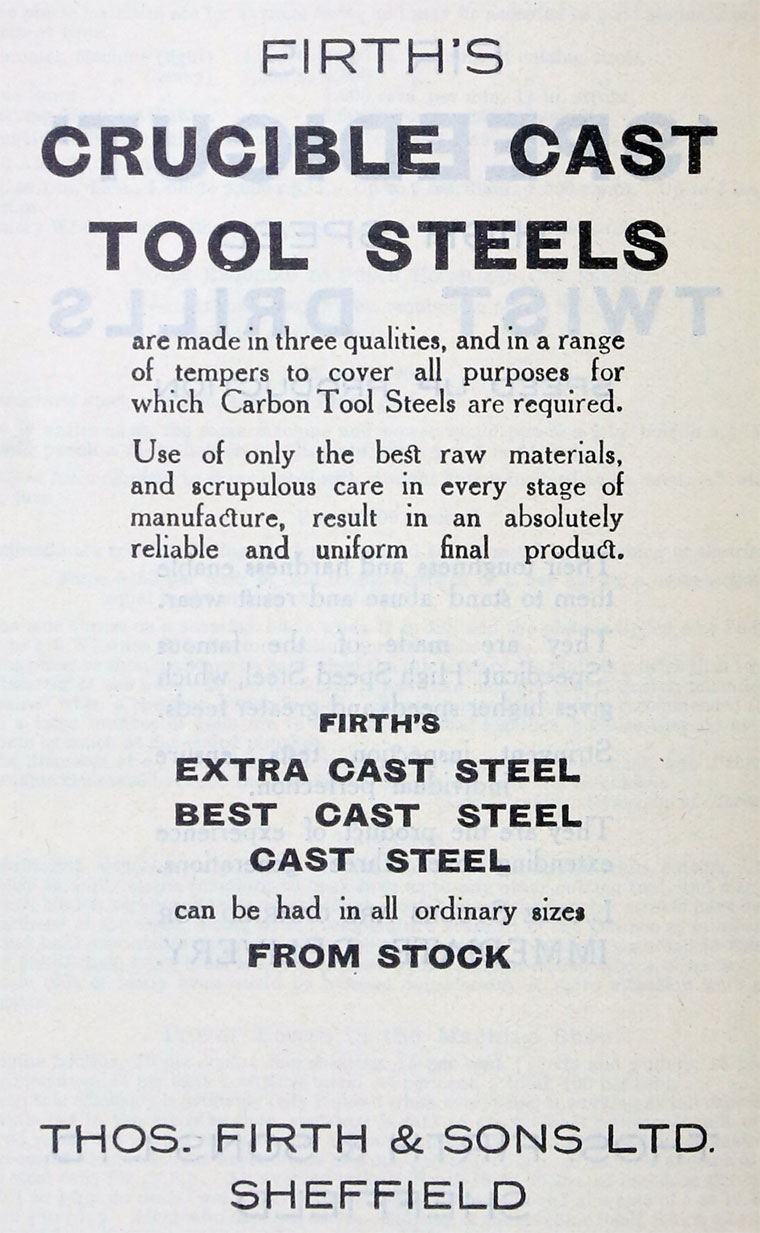 Their father, Thomas Firth, Senior, joined them shortly afterwards, together with head smelter Joseph Bridden, and the business became Thomas Firth and Sons. Mark took the lead on sales.

1849 A new works covering 13 acres was begun in Savile Street, this was to become Norfolk works. They also leased Claywheels forges at Wadsley Bridge (1849–58).

1850 By this time the company had expanded and had 25 workers. Thomas Firth, Senior, died. Mark Firth took over the running of the business, helped by Thomas Firth, Junior, and a third brother, John Firth, who joined the partnership.

By 1857 the business employed 500 men and joined the other major steel works in moving eastwards in Sheffield. Crucible steel was still based on Swedish bar iron, landed at a wharf at Norfolk works.

Sales of file and edge tools to Russia weakened in the Crimean War, so Firths increased American sales, secured orders for crinoline hoops, then switched to armaments, specializing in gun tubes and projectiles, whilst their Sheffield neighbours focussed on armour plate.

By 1860 Armstrongs, Vavasseurs, and Woolwich Arsenal were major customers; Whittington Moor sent steel telegraph poles to India, made other steel fabrications, and supplied plant for Sheffield.

1871 The company cast the thirty five ton "Woolwich Infant" gun. This was said to have required 1000 crucibles to cast its outer and four inner tubes. Naval guns were manufactured for the British and French navies. Land guns reached 100 tons, with 16 in. gun blocks and 2000 lb projectiles. In addition, Firths led the way in attempts to manufacture compound armour plate.

1874 "Immense Casting at Messrs. Firth and Sons. — The first step towards the production of the 81-ton gun has just been taken. All the built-up guns made at the Royal Arsenal, Woolwich, are lined with a steel tube. This tube is derived from a solid cylinder or ingot, supplied from the works of Messrs. Firth and Sons, of Sheffield. The casting of the tube for the enormous gun now designed was carried out at these works on Friday week in the most successful manner. The ingot is made of crucible steel, and required for its construction 628 crucibles, each containing 70 pounds of metal, the total weight being thus very nearly 20 tons. The casting occupied 42 minutes, and employed 194 men. The ingot measures 42 inches in diameter and 13 feet in length."[1]

1875 they produced an eighty ton gun.

1876-78 Despite being one of the worlds' leading gun forgers, the company suffered during the depression of this time.

1880 Mark Firth, whilst at his Norfolk Works, suffered a stroke on 16 November and died 12 days later.

1881 Incorporated as a private limited company. The company was registered on 15 June, to acquire the business of steel, file and edge tool manufacturers of the firm of the same name. [2]

c.1900 Tools department established (which eventually grew so much that it was floated as a separate company Firth, Brown Tools in 1946).

1902 John Brown and Co acquired seven-eighths of the ordinary shares of Thomas Firth and Sons by exchange of shares, the two companies continuing under separate management.

1912 Harry Brearley invented stainless steel, although Firths did not recognise the potential.

1870 Report on the Production of a Large Crucible Steel Casting

'ENORMOUS STEEL CASTING AT NORFOLK WORKS. There was yesterday cast, with the most complete success, at Messrs. Thomas Firth and Sons' famous works, Sheffield, one of the largest blocks of steel ever cast in this country. It is intended, we believe, to form the shaft of the screw of the Dublin Steam Packet Company's vessel, "Munster;" is about 15ft. in length by nearly 4ft. in diameter; and weighs over 15 tons. For some days most elaborate preparations for the operation had been made; and the weather yesterday morning was anxiously watched, as, had it rained, the operation must have been postponed. Crucible steel alone being used, the pots had to be brought from all quarters of the work—and rain would of course have tended to cause inequalities in the metal.

'The work of melting the steel commenced about eight o'clock, in no fewer than five hundred and forty four crucibles; each containing 64lbs.—the total quantity thus being 34,816lbs., or 15 tons, 3 qrs, 12 lbs. About half-past twelve o'clock the work of casting commenced, and was a complete mechanical as well as scientific triumph. With 544 crucibles to empty into one mould, the difficulty of procuring a steady flow of metal at an equal temperature was, as may he imagined, very great; but so admirable were the arrangements—and so enthusiastic was the interest which the workmen individually took in the process—that in half an hour it was triumphantly accomplished, without the slightest flaw or accident.

'The scene was a striking illustration of the order and method which should ever prevail in a large establishment. The motto of those in charge was evidently, "a place for every man, and every man in his place." Silently, and almost noiselessly, the stream of workmen approached with the crucibles, and as silently retired in the opposite direction when the mould had received the appointed quantity of molten metal; till one could not resist the idea that he saw before him the results of almost military training. No battalion of French or Prussians could have performed their dangerous and fatiguing task with more steadiness, precision, and care; and we believe Mr. Firth, who was himself superintending the work, expressed his extreme satisfaction with the splendid manner in which the workmen had done their duty. Not a single crucible was upset; not a single, flaw occurred in the metal; not a single hitch occurred in the order of time in which every crucible required .to be emptied.

'We do not know whether the rules of Norfolk Works permit those of the public who may be interested such triumphs of engineering skill —for they are really entitled to such a designation—to pay them a visit; but we are certain there are many who would be much gratified by witnessing such a magnificent casting. Descending to the subterranean part of the workshop, where the iron mould stood free, the effect was grand in the extreme. The mould—which was about four feet in diameter— had, of course, been heated by the steel to brilliant white; and the mighty mass of glowing metal, in such a strange and cavernous place, looked in very truth like a " pillar of Pandemonium."

'A popular idea of the magnitude of the casting may be realised when we state that some ten or twelve years ago the correct casting of an ingot of 15 cwts. of crucible steel was considered as great a triumph as that of 15 tons yesterday now is! The weight of an ordinary crucible steel ingot is only about 45lbs—between which and 15 tons there a slight difference.

Note: Much larger ingots were to be cast in later years by various steel makers.