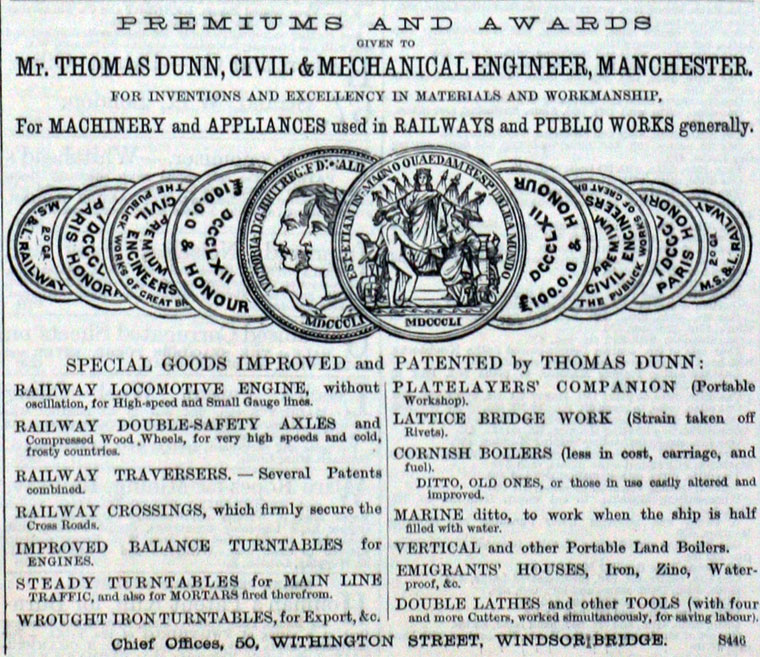 1847 Thomas Dunn started the Windsor Bridge Iron Works at Pendleton, near Manchester, but they did not prove successful[1]

Note: In 1848 the proprietors of Windsor Bridge Iron Works were Dunn and Elliott. They made a hydraulically-operated chain cable testing machine for Hingley and Sons of Cradley Chainworks and Salthouse Dock, Liverpool. It was tested in the presence of Mr Fothergill, W. Mayburn [Walter Mabon] of the Ardwick Iron Works, Mr Barlow, Mr Booth of Joseph Whitworth and Co, and others.[2]. Note: 'W. Meyburn' was Walter Mabon.

1848 Thomas Dunn of Windsor Bridge Iron Works wrote to The Practical Mechanic's Journal describing his use of a portable coffer dam for setting the piers for the Springfield Bridge over the River Irwell. The coffer dam comprised a pair of concentric wrought iron cylinders 6ft 6ins and 9ft diameter, 8 ft high. The central pier had stone five columns in the middle of the river, each having its bed prepared and the pillar constructed within the coffer dam, after which the dam was moved for construction of the next pillar in about 18 hours.[3]

1865 Prospectus issued for a new company to be formed with the title Thos. Dunn and Co. (Limited). The company was established to purchase the blast furnace and goodwill of the old established firm at Windsor Bridge, Salford.[5]