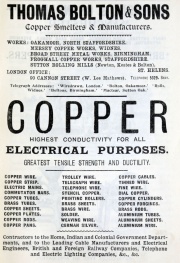 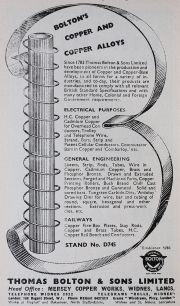 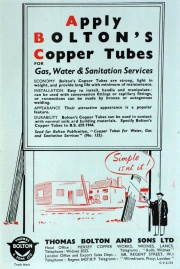 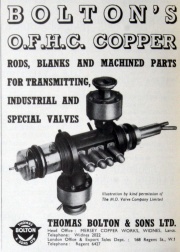 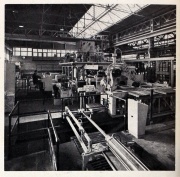 1783 Thomas Bolton founded a company with his sons in Birmingham

1825 the Broad Street works were built, which continued in operation until 1911.

1852 Purchased the assets of the Cheadle Copper and Brass Works from John Wilson Patten and Co. (established at Cheadle in 1719). The deal included Oakamoor Mills[1]. The Oakamoor Works were then expanded.

1866 Supplied wire for the first successful cable across the Atlantic.

1881 The Mersey Copper Works were built for smelting and electrolytic refining; a site on the western seaboard was chosen in order to save carriage on the imported ore.

1892 Messrs. Bolton erected works at Froghall in North Staffordshire for the production of high-conductivity copper for telegraphy and electrical generators.

1894 Additional works, the Sutton Rolling Mills, were acquired at St. Helens for the manufacture of copper rollers, chiefly used for calico printing.

By 1902 the company had works at Birmingham, Oakamoor, Froghall, large smelting, refining, and rolling mills at Widnes, and engineering works at St. Helens.

1902 The company was registered on 28 May, to acquire the business of copper smelters of the firm of the same name. [3]

1904 Harold Evelyn Dolphin was appointed manager of the Sulphate of copper works, Widnes[4]

1920 Set up Diamond Die Manufacturing Works at Parkstone, Dorset under the charge of David Colfox Bolton

1920s/30s Due to competition from foreign supplies of electrolytic copper, it became uneconomic to carry out the refining processes in Britain, so importing of copper ore stopped. The works then specialized in the manufacture of locomotive copper firebox plates and stay rods, and sulphate of copper.