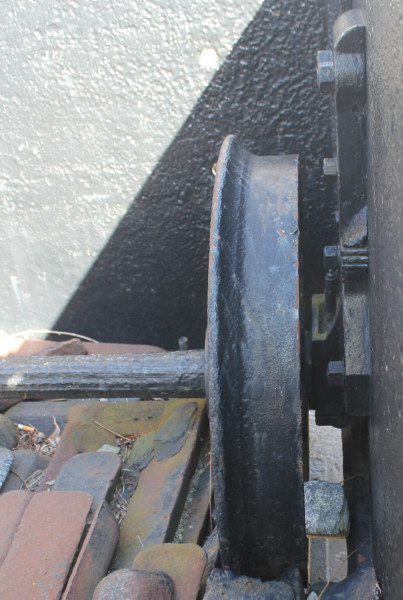 Moveable footbridge whose two halves could be withdrawn for the passage of vessels. Located at the entrance to the East Dock of St. Katharine's Dock. Now preserved alongside the bridge which replaced it in 1994.

Although it is known as Thomas Telford's bridge, a drawing dated October 1829 was signed by his Resident Engineer at the Docks, Thomas Rhodes. The maker was John Lloyd (of London).[1]

The bridge is assembled from wrought iron forgings and iron castings. The wrought ironwork spanning the waterway is attached to rail-mounted cast iron counterweight boxes. The rails were pitched at the standard gauge (4 ft 8½" ), or thereabouts. Movement was by rack and pinion. If the wheels are original, they were certainly 'state of the art', being of the type fitted to several locomotives c.1830.