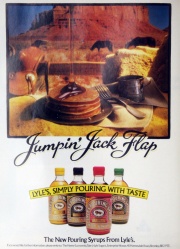 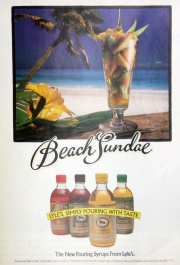 Tate and Lyle is a UK based multinational agriprocessor.

1855 By this time, after being apprenticed to a grocer, Tate had a chain of his own grocery shops.

1859 Company founded when Henry Tate became a partner of John Wright the owner of a sugar refinery.

1862 Tate sold his shops and opened his own sugar refinery.

1869 The partnership between Tate and John Wright ended and Tate then took his two sons, Alfred and Edwin, into business with him, the company then becoming Henry Tate and Sons.

1881 Lyle built two new refineries in London, upstream from Tate's, and they were soon producing sugar and Lyle's Golden Syrup.

1882 The new refinery was processing over 1,100 tons of sugar a year. The new London refinery produced 214 tons in its first year.

1885 Golden Syrup was introduced to the UK market.

1903 The company went public as Henry Tate and Sons Ltd.

1921 The company was formed from a merger of two rival sugar refiners, Henry Tate and Sons and Abram Lyle and Sons and the name was changed.

1949 The firm introduced its "Mr Cube" brand, as part of a marketing campaign to help it fight a proposed nationalization by the Labour government.

2008 The company that was first formed in 1921 is still successful today as Tate and Lyle.