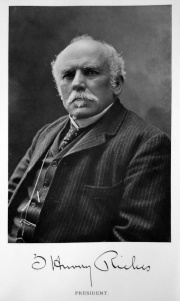 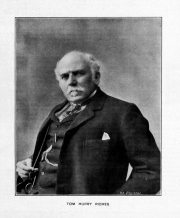 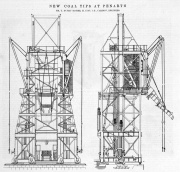 1846 Born in Cardiff the son of Charles Hurry Riches

At the age of 17, he undertook an apprenticeship with the Taff Vale Railway, at their locomotive works. He spent five years in the shops and drawing office of the company. At the same time he studied Science and Art classes. In 1868 he gained a scholarship at the Royal School of Mines.

On the completion of his apprenticeship, he went to see for a few months, serving as second engineer on the S.S. Camilla. On his return he attended the Royal School of Mines, wining the Science and Art and Whitworth scholarships.

After completing his education he joined the Bute Ironworks and the Bute Old Works as General Manager. He remained in this position for three years, designing and building many iron roofs and bridges, as well as assisting in the general supervision of the company’s engines, machinery, steamers and dredgers.

In 1872 he returned to the Taff Vale Railway as chief locomotive foreman. The following year he was promoted to locomotive superintendent. He was at the time the youngest locomotive superintendent in Britain. He retained this appointment until his death. During that time, the locomotive stock was doubled. His responsibility was also extended to include all carriage and wagon work, the hydraulic and dredging machinery, dock machinery and coaling appliances.

He was President of the Institution of Mechanical Engineers in 1907.

He was also a President of the Association of Locomotive, Carriage and Wagon Superintendents of the United Kingdom, and was a keen member of the South Wales Institute of Engineers.

TOM HURRY RICHES was born in Cardiff on 24th November 1846, being the son of the late Mr. Charles Hurry Riches, of that town.

He was educated at Trices' Academy, Cardiff, and at the age of seventeen he entered the locomotive works of the Taff Vale Railway as an apprentice, under the late Mr. Joseph Tomlinson.

He spent five years in the shops and drawing office of the company, pursuing his studies at the same time with such success at Science and Art classes that he gained in 1868 a scholarship at the Royal School of Mines.

On the completion of his apprenticeship he went to sea for several months, serving as second engineer on the S.S. "Camilla"; and on his return from abroad he attended the Royal School of Mines where he obtained the Science and Art and also the Whitworth scholarships.

Subsequently he became manager of the Bute Iron Works and of the Bute Old Works, under the trustees of the late Marquis of Bute, with whom he remained for three years. During this period he designed and built many iron roofs and bridges, and assisted in the general supervision of all the engines, machinery, steamers, and dredgers belonging to the Trust.

In 1872 he re-entered the service of the Taff Vale Railway as chief locomotive foreman; and in the following year was appointed locomotive superintendent, in succession to Mr. Fisher, who followed Mr. Tomlinson. He was then the youngest locomotive superintendent in the Kingdom. That appointment he retained until his death, although ill-health had rendered it necessary for him latterly to relinquish some of the active duties connected with the position.

During his superintendence the locomotive stock was more than doubled, and the importance of his office was increased in even greater proportion, for, in addition to the locomotive department, his responsibility was extended to embrace the carriage and wagon work, the hydraulic and dredging machinery, dock machinery, gates, etc., as well as the coaling appliances belonging to the company. As a locomotive engineer he was held in high esteem by his fellow superintendents, and though connected with one of the smaller railway companies, he ranked professionally with the leading members of the engineering world.

He was at one time President of the Association of Locomotive, Carriage and Wagon Superintendents of the United Kingdom, and was also a Member of the Institution of Civil Engineers, the Iron and Steel Institute, and other societies. His most valuable services to technical societies were rendered to this Institution and to the South Wales Institute of Engineers.

He became a Member of this Institution in 1874, was a Member of Council from 1885 to 1898, a Vice-President from 1899 to 1906, and President during 1907 and 1908. When the Summer Meeting of this Institution was held in Cardiff in 1906 under the Presidency of the late Mr. Edward P. Martin, he was largely instrumental in securing its success, taking a very active part as joint secretary of the local Reception Committee.

His contributions to the discussions were numerous, and in addition to his Presidential Address in 1907 (Proceedings, page 495), he was the author, or joint author, of six Papers read before the Institution. The first one, read in 1877, described the "Tynewydd Colliery Inundation." In this connection he was presented at the Mansion House, London, by the Lord Mayor, with a piece of silver plate "in recognition of his bravery " in rescuing the miners after 240 hours' entombment.

In 1880 he contributed a Paper on "Automatic Action in Continuous Railway Brakes," and in 1904 "Some Notes on Testing Locomotives." At the Cardiff Meeting, in 1906, as joint author, he presented "Mechanical Appliances used in the Shipping of Coal at Penarth," which was followed later in the same year by "Railway-Motor-Car Traffic"; and at the Bristol Meeting in 1908, he was joint author of a Paper on "Forced Lubrication for Axle-Boxes." He took a considerable interest in the South Wales Institute of Engineers, and was President of that Society in the two years 1901-2 and 1902-3.

In 1900 he was appointed reporter to the International Railway Congress, for Great Britain and the Colonies, on the subject of "Express Passenger-Engines," and in 1910 he held a similar office, the subject then being "Railway Motor-Carriages." He was a great advocate of high-speed hydraulic machinery, having had considerable experience of its working. He took a very kindly interest in all young engineers, and insisted that his apprentices should take steps to improve their theoretical knowledge of engineering by attending technical classes.

For a short time he was a member of the Town Council of Cardiff, but after nine years he was unsuccessful in obtaining re-election. In view, however, of his valuable services to technical education, he was immediately co-opted, being appointed Chairman of the Technical Committee of the County Borough of Cardiff, which position he held for twelve years.

He was a Justice of the Peace and Governor of the National Museum of Wales, of the Court of which he was a Member, and he was also a Member of Council of the University College of South Wales and Monmouthshire.

During the last few years his health had prevented him from leading so active a life as before, and his death from heart failure occurred on 4th September 1911, in his sixty-fifth year.

After a varied practical experience of some years, he joined in 1872 the locomotive department of the Taff Vale Railway, in which he had been trained, and in the following year he was appointed Locomotive Superintendent, a position which he held until his death.

He was a Past-President of the Institution of Mechanical Engineers, and held office in various other societies and educational institutions.

Mr. Riches was elected an Associate Member of The Institution on the 4th March, 1879, and was transferred to the class of Members on the 10th January, 1882.

TOM HURRY RICHES died at his residence in Cardiff on September 4, 1911, at the age of sixty-five. He was the son of the late Mr. Charles Hurry Riches of Cardiff, and at the age of seventeen entered the works of the locomotive department of the Taff Vale Railway as an apprentice under Mr. Joseph Tomlinson.

After five years' training in the workshops and drawing-office of the company he secured, in 1868, a scholarship of the Royal School of Mines, for the purpose of taking up which he resigned the position, to which he had just previously been appointed, of second engineer on the steamship Camilla. His career at the School of Mines was highly successful, and he succeeded in obtaining a Whitworth Scholarship. He subsequently became foreman to the trustees of the late Marquis of Bute, after which he was employed in constructional work and engineering at the Bute Docks, and eventually became manager of the Bute Ironworks and the Bute Old Works.

Although the Taff Vale Railway was but one of the smaller railway concerns in the kingdom, his professional ability and all-round knowledge led to his early recognition as an authority in the railway world, where he ranked amongst others as a leading member of his profession. As an engineer he accomplished a task which had been declared impossible by engineers of even greater experience, namely, the changing of the gates at Penarth docks without the loss of a tide and with the minimum delay to shipping; and he also successfully installed hydraulic plant for the shipment of coal at Penarth which enables that operation to be carried out more rapidly at that port than, with a similar installation, at any other.

On the occasion of the disastrous flooding of the Tynewydd Colliery in 1877, Mr. Hurry Riches worked day and night at the task of unwatering the mines, with the result that many of the colliers were rescued after having been entombed for ten days. In recognition of the bravery he displayed on that occasion, he was subsequently presented with a piece of silver plate by the Lord Mayor of London at the Mansion House. He was chosen as President of the Association of Locomotive, Carriage, and Waggon Superintendents of the United Kingdom, and in 1900 he was appointed reporter to the International Railway Congress held in Paris. He took a great interest in all technical matters relating to railway engineering.

He was President of the South Wales Institute of Engineers from 1901 to 1903, and in 1908 was elected President of the Institution of Mechanical Engineers. He was a member of the British Association, was appointed on the Council of Governors of the Imperial College of Science and Technology, and was a member of the Council of the University College of Wales and Monmouthshire. He was also a director of the Cambrian Collieries, Limited. In 1908 he acted as chairman of the Mechanical and Engineering Section of the Franco British Exhibition. Throughout his whole career, moreover, he found time to devote himself largely to the welfare of his native town, and evinced great interest in technical education, having been for twelve years chairman of the Technical Committee of the County Borough of Cardiff. His contributions to the discussions of the various societies and institutes of which he was a member were numerous and well informed.

He became a member of the Iron and Steel Institute, at whose meetings he was a constant attendant, in 1898; and on the occasion of the visit of the Institute to Cardiff in 1897 he acted as honorary secretary to the Reception Committee, and contributed by his endeavours to the success which attended that meeting.