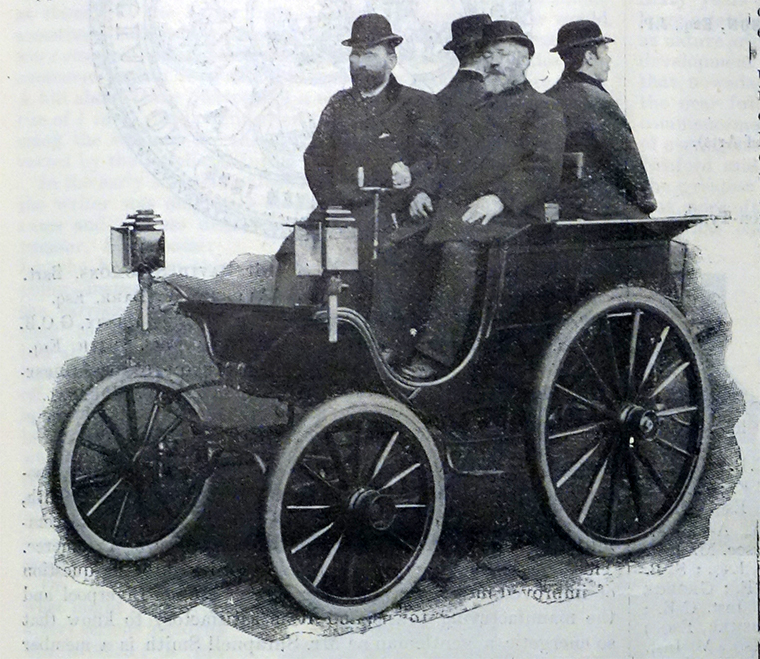 Note: This is a sub-section of T. Coulthard and Co

STRIKING evidence of the commencement of the new era in locomotion is afforded by a visit to the works of Messrs. T. Coulthard and Co., Preston.

This well-known firm of engineers has taken up in earnest the construction of automotors, having erected large works, well supplied with special tools for this purpose.

Messrs. Coulthard have in hand several vehicles fitted with "Pennington" motors. One of these, shown in the adjoining illustration, is a motor-car built, we understand, to carry eight or nine passengers and a ton of luggage. The car is fitted with a 16 horse-power Pennington motor and carries two tanks of 50 gallons capacity for supplying the motor with oil and water.

Messrs. Coulthard are building several of these cars for the West Australian Freight and Express Company, of Southport, for use on the goldfields of Western Australia. An interesting feature in this vehicle is the dispensing entirely with carriage springs by the use of wheels built upon cycle lines with ball bearings, and fitted with 9-inch pneumatic non-puncturable tyres. These tyres, attached to one of the above-named cars, have been very thoroughly tested by Messrs. Coulthard over very rough ground, and have been found to give entire satisfaction.

Another type of carriage, and one which has apparently an important future before it, is the "Lancashire" autocar, shown by the annexed illustration, the design of which has been registered by Messrs. Coulthard. This car has been specially designed to meet the requirements of those who desire a light, compact, yet strong and durable vehicle for ordinary use. The "Lancashire " is fitted with a powerful Pennington motor, having two different speeds, as well as a reversing motion. The body is hung on springs, rendering it quite independent of the frame which carries the motor and gearing. In consequence of this, the vibration of the motor is taken up by the special arrangement of springs, instead of being communicated to the Carriage body and its occupants.

A very different kind of vehicle, also built by the firm, in striking contrast to the last-named, is a large freight wagon, to carry a load of 10 tons, and fitted with a motor of 25 horsepower.

We gather from Messrs. Coulthard that they have some difficulty in satisfying the demands of customers for quick delivery, as the latter do not sufficiently recognise what a variety of points in this new industry have to be carefully considered, tested, and approved before being carried out in the construction of the vehicles to ensure their giving entire satisfaction.

The majority of the public, which does not understand the practical side of motor-car building, expected to see thousands of these vehicles overrunning the country within a week of the passing of the new Act, imagining that they could be turned out at a moment's notice. Hence the mistaken idea amongst the ignorant that the motor-car boom is a thing of the past. It will not be long now, we think, before they have a sharp awakening, and it is as well for the future of the industry that the new vehicles have not been "rushed" in manufacture, but have been delayed by the various makers like Messrs. Coulthard and Co., who, having a reputation to lose, are determined that what they do deliver shall not impair it.